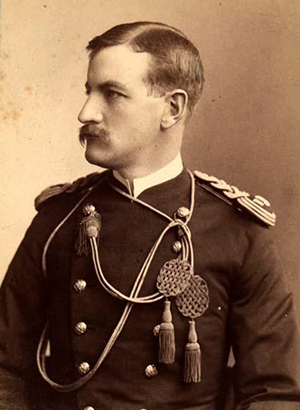 William (Willie) Ewen Shipp, army officer, was born in Asheville, the son of Judge William Marcus and Catherine (Kate) Cameron Shipp. The family moved to Lincolnton in 1862. His mother died when Willie was four, and he spent his youth in Lincolnton and Charlotte under the care of his grandmother, Mrs. Bartlett Shipp. He received his earliest education from Miss Mary Wood Alexander and the Reverend W. R. Wetmore, noted teachers of the day. In 1874 the family moved to Charlotte, where he attended the Carolina Military Institute, benefiting from the example of its commandant, Colonel John P. Thomas. Fond of sports and exercise, young Shipp was described by his contemporaries as being "of fine physique, of admirable morals, of marked mental ability, with studious habits."

A brilliant examination in 1879 in competition with forty contestants won him an appointment by Congressman Walter L. Steele to the U.S. Military Academy at West Point. Eleventh in a class of fifty-two, he was graduated in 1883, the first southerner to do so since the Civil War. At his own request he was assigned to the Tenth Cavalry, a unit composed of black soldiers. As a second lieutenant he joined his unit on the western frontier and saw hard service in the Indian campaigns, for which he received a commendation for gallantry in the uprising headed by Geronimo. Shipp was promoted to first lieutenant in 1889. Because of a sprained ankle he was disabled for active service and was assigned to the Davis Military Institute at Winston, N.C., as professor of military tactics and special instructor of the North Carolina State Guard. Having recovered, he joined his regiment in August 1897 at Assiniboine, Montana, and accompanied it to Chickamauga and afterwards to Florida.

At the beginning of the Spanish-American War he was offered assignments that would have kept him out of Cuba, but he requested active service and thus was attached to General William R. Shafter's army of invasion. Made brigade quartermaster, he volunteered once again and met his death in the charge on San Juan Hill. He had been sent by General Leonard Wood to deliver an order to advance to Colonel Theodore Roosevelt. After his return, Shipp had rejoined his own regiment and was leading his Troop F when he was killed.

Shipp married Margaret Busbee of Raleigh in 1894, and they were the parents of two sons, William Ewen, Jr., and Fabius Busbee. A member of the Episcopal church, he was buried beside his mother in St. Luke's churchyard at Lincolnton. His military funeral, with the assistance of Confederate veterans and the Lee Rifles from Charlotte, was attended by three thousand people.

In Charlotte the children of the school that Shipp had attended began a campaign to raise funds for a monument to him. Subsequently a fifteen-ton granite obelisk, thirty feet tall, was dedicated in front of the former U.S. Mint both to honor Shipp and to commemorate the military reinstatement of the Southern states after the Civil War. 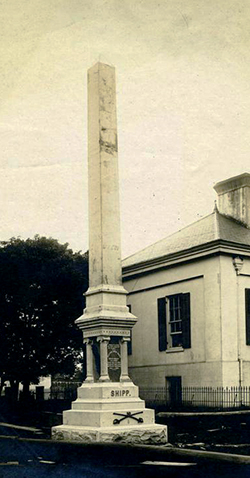 I was born Mary Bartlett

I was born Mary Bartlett Shipp and Wm Shipp was my great uncle. Willie's brother, Bartlett Shipp, is my grandfather. I now live in California, but treasure my North Carolina heritage.