Thaddeus Garland Stem, Jr., poet, essayist, newspaper columnist, and short-story writer, the son of Thaddeus G., attorney at law, and Hallie Mayes Stem, was born in his parents' home at 104 East Front Street, Oxford. He lived all his life and died at the same address. Interment was in Elmwood Cemetery, Oxford. He had one older brother, John Mayes. Never called Thaddeus but always Thad, he had been well christened "Junior." After his father's 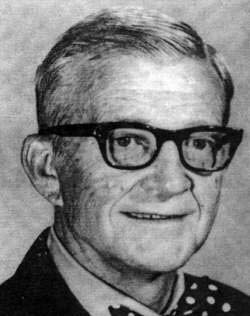 death in 1959, he reminisced: "My father was the most wonderful man I ever knew . . . the kindest, gentlest. He couldn't stand for anybody to make a child unhappy . . .. We were very close. Maybe too close. He had an office up the street and when he had an idea he'd come down to see me [in Thad, Jr.'s, one-room writer's office in an old buggy factory] and when I had an idea, I'd go up to see him." Upon further study, other parallels and parental influences become clear.

After playing football, basketball, and baseball at Oxford High, Thad, Jr., was sent in 1933 to Darlington School in Rome, Ga., to prepare him for Duke, where his father (an alumnus of Trinity Park School, Trinity College, and Trinity Law School) was by then a trustee. Entering Duke as a freshman in September 1934, Stem was more interested in social life than in scholarship. He "wrote a lot of junk," but no poetry, and left in the spring of 1938 with too few credits for a degree. This ended his formal education. Back at home that fall he "did a lot of fox hunting" and "ran around a lot." A big man with a small-boy grin and a puckish twinkle in his eye, he had been troubled by a bronchial condition and decided to spend the winter of 1938 in Florida. There he worked for a West Palm Beach newspaper. Returning home the following summer, he took a job selling life insurance and worked seasonally on the Oxford tobacco market until the outbreak of World War II delivered him from this effort. He served in the army throughout the war and afterwards worked as veterans' service officer for Granville County.

About 1943 or 1944 he began writing poems for the love of expressing himself in this medium, and in 1945 he sent some of them to Lyric magazine in Roanoke, Va. They were returned by editor Leigh B. Hanes, who suggested that Stem rework and resubmit them. Having done so, Thad was rewarded by the publication of nine of the poems in one issue of Lyric that year. He continued to work at his verses, sometimes writing as many as two or three in one day, then going for several weeks without completing anything. In 1947 this more-or-less unfocused activity was forced into more positive channels by his marriage on 21 November to Marguerite Dety Laughridge Anderson, of Marion, widow and mother of a three-year-old son, William Eugene Anderson. "I suddenly realized I had to get serious," he later said. Soon he was turning out some 15,000 words a week of publishable material—newspaper articles, essays, poems, and short fictional pieces.

Appearing in 1949 was his first book, Picture Poems; and in 1953, The Jackknife Horse, another book of poems, which won the Roanoke-Chowan Award in 1954. By 1960 he had two other books to his credit. The Perennial Almanac (1959) was a collection from his contributions to that date to the Raleigh News and Observer, and The Animal Fair (1960) was a series of sketches or informal essays in which he molded small-town vernacular into a poetic medium. He had also sold, he estimated at the time, about 8,000 short "pieces"—mostly to in-state newspapers, especially the News and Observer and The Pilot (Southern Pines)—and was doing a weekly column that developed over the years into an informal daily editorial on a variety of subjects.

Stepping up this already vigorous pace, he published before 1978 eleven more books: P.T.A. Impact: Fifty Years in North Carolina, 1919–1969 (1969); Senator Sam Ervin's Best Stories, which he and Alan Butler did jointly in 1973; The Tar Heel Press (1973), a history of journalism in the state for the one-hundredth anniversary of the North Carolina Press Association; a foray into the area of semantics, Ransacking Words and Customs from A to Izzard (1977), which gives hard-to-come-by information, curious and fascinating, on the origin of many common English words and phrases; two more collections of poems and essays, Penny Whistles and Wild Plums (1962) and Spur Line (1966); two books of essays, Light and Rest (1964) and Entries from Oxford (1971); a volume of short stories, A Flagstone Walk (1968); one of poetry, Journey Proud (1970); and one of all three genres—essays, fiction, and poetry, Thad Stem's First Reader (1976).

When, in 1978, he learned that because of kidney failure he would need to undergo weekly dialysis at Duke Medical Center for the rest of his life, he recovered from his "initial period of hopeless despair" by a valiant turning anew to his study and writing. "When I'm writing, I don't think about dialysis," he said, and, "All my life I've believed that the chief importance of learning is that ultimately one is naked save for it . . .. Old age, adversity, disease, all come. Friends die, money goes, . . . but learning is always the seed corn to grow another crop." During the next few months he wrote six articles for The State magazine, three short stories, hundreds of editorials for the News and Observer, and his last published book, Thad Stem's Ark (1979), a collection of essays with a few poems and one story. In all, he estimated that he had published at least 75,000 words in the period after 1978.

A seventeenth volume, in progress at the time of his death, was to have been a history of Johnston County. The manuscript may now be seen at the Johnston County Library in Smithfield.

Stem's hobbies included all spectator sports, taking part in political campaigns, walking in the woods, and reading. Favorite authors were Twain, Cather, Glasgow, Whitman, Wolfe, and Frost. He belonged to Sigma Nu, to the Democratic party, of which he was for several years Granville County chairman, to the American Legion, and to the Methodist church. Long a member of the Granville County Library Board, he also served for six years as chairman of the State Library Commission and was chosen to help draft the National Library Construction bill. He was in demand as a speaker and appeared often before civic organizations, book clubs, and writers' groups. Once called the "last great poet of small town America," he was a past chairman of the North Carolina Writers' Conference, which honored him at its annual meeting at Raleigh in July 1979 with a testimonial dinner. Besides the Roanoke-Chowan Award, he had received the Edward Arnold Young Cup for Poetry and the North Carolina Award in Literature. He was chairman of the North Carolina Arts Council and a member of the Mark Twain Society; shortly before his death he became a member of the North Caroliniana Society.

His only children were his stepson, Bill Anderson, and Bill's son, William Thaddeus. (The Andersons' daughter was born after Stem's death.) But all children loved him, just as they had loved his father. Late in his life the young people at Oxford designated him "Our man for all seasons." Most fitting, then, was the scholarship fund for Granville County schools, established after his death in his memory, providing annually a $1,000 stipend to the graduating senior demonstrating the greatest creativity in one of the arts. The first award was made in the spring of 1981. An oil portrait of Stem hangs in the Granville County Library.

International Who's Who of Writers and Authors (1981).