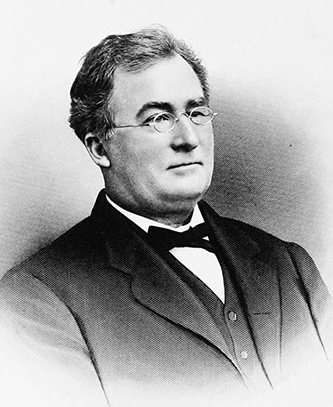 Daniel Augustus Tompkins, engineer, industrialist, and newspaper publisher, was born in Edgefield County, S.C., to DeWitt Clinton and Hannah Virginia Smyly Tompkins. After attending the local schools and Edgefield Academy, he entered the University of South Carolina in 1867. Two years later he transferred to Renssalear Polytechnic Institute in Troy, N.Y., and was graduated with a civil engineering degree in 1873.

Alexander Lyman Holley, who introduced the Bessemer process of making steel to the United States, hired Tompkins during school vacations to work as a draftsman in the Troy steel works of John A. Griswold and Company. Upon graduation Tompkins worked for Holley for a year in New York City as a designer and private secretary. Holley then sent Tompkins to Bethlehem, Pa., where he was a machinist for John Fritz at the Bethlehem Iron Works. At the end of five years Tompkins had become a master machinist. Fritz arranged for him to go to Westphalia, Germany, to supervise the installation of a hoop mill at the Schwerte Iron Works. Returning from Germany in late 1879, Tompkins worked as a draftsman in the Bethlehem Iron Works until September 1881, when he moved to Crystal City, Mo., and was employed for almost two years as a master machinist for the Crystal Plate Glass Company.

In March 1883 Tompkins went to Charlotte, which became his permanent home, as agent for the Westinghouse Machine Company. In that capacity he installed steam engines in the Carolinas and received a commission on each engine sold. The arrangement led to the formation of the D. A. Tompkins Company in partnership with R. M. Miller, Sr. One of the first engines Tompkins installed was in a cottonseed oil mill belonging to Fred Oliver. Tompkins and Oliver combined to organize the Southern Cotton Oil Company, which took over its competitor, the American Cotton Oil Company. They built eight mills in 1887 before dissolving the partnership and selling their interest in the company. In the same year the D. A. Tompkins Company incorporated and Tompkins, the major shareholder, served as its engineer. By 1889 the company was involved in the construction of mills and electric plants. It had, by 1910, helped build at least 250 cotton oil mills, 150 electric plants, and 100 cotton mills.

During the early years of his interest in cotton mills Tompkins acted only as contractor, but soon he promoted the building of mills by encouraging local communities to raise money for that purpose on a subscription basis. In the decade before 1900 he acquired three cotton mills: Atherton Mill in Dilworth, High Shoals Mills in Gaston County, and Edgefield Manufacturing Company in Edgefield, S.C.

Tompkins's considerable textile holdings led to his appointment by President William McKinley to the U.S. Industrial Commission in 1899. The next year he joined the National Association of Manufacturers, in which he played a policy-making role. Numerous articles appeared under his name in the Manufacturers Record. Instrumental in the founding of the textile school at North Carolina State University and a member of the board of trustees for over twenty years, Tompkins encouraged the development of similar programs at Clemson University and in Mississippi and Texas. He was president of the Manufacturers' Club in Charlotte, belonged to the Engineers' Club in New York City, and was a director of the Equitable Life Insurance Company. Tompkins was a lifelong Democrat.

He owned a controlling interest in three newspapers: the Charlotte Daily Observer (formerly the Charlotte Chronicle ), Charlotte Evening News, and Greenville (S.C.) News. The Observer Printing House, also owned by Tompkins, published many pamphlets and speeches under his name, as well as several books: Cotton Mill Processes and Calculations (1899), Cotton Mill Commercial Features (1899), American Commerce: Its Expansion (1900), Cotton Values in Textile Fabrics (1900), Cotton and Cotton Oil (1901), and History of Mecklenburg County and the City of Charlotte from 1740 to 1903 (1903). Tompkins apparently did not write the books and articles on which his name appeared as author but employed ghostwriters. The History was written by Charles Lee Coon, Alexander J. McKelway, and Bruce Craven. E. W. Thompson, an engineer in Tompkins's employ, wrote the technical books.

Tompkins's newspapers and publishing firm served him as mouthpieces in his role as a major spokesman for the industrial New South. His biographer, George T. Winston, said, "Anything, everything, and everybody—all the world—was grist in the voracious Tompkins mill of industrialism." Tompkins's outspoken opposition to compulsory public education, child labor legislation, wage/hour regulation, and restricted immigration was calculated to maximize profits and to ensure a continuous supply of cheap labor for southern mills. He saw the unionization movement as an effort of New England mill owners to put their southern counterparts out of business. In 1911 Clark Howell of the Atlanta Constitution said of Tompkins, "He perhaps has done more to stimulate the cotton mill development of the South than any living man."

Tompkins's fiancée died in 1884 and he never married. Due to declining health he retired from active involvement in his business in 1910 and moved to his summer home in Montreat in 1912. He died of a paralytic condition two years later and was buried in Elmwood Cemetery, Charlotte. The public library in Edgefield, S.C., and the former textile building at North Carolina State University were named for him.