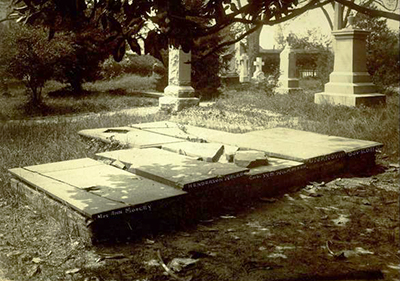 Henderson Walker, president of the Council and acting governor, justice of the General Court, Court of Chancery, and Admiralty Court, settled in the North Carolina colony about 1682. His early history is unknown, but it is evident that he had had educational advantages. Although he was in his early twenties, he became clerk of the county court, then the highest court of law in the colony, soon after his arrival. Appointed about March 1682/83, he served at least until 1689. He was clerk of the Council during part or all of that period.

In 1692 and 1693 Walker was secretary of the colony, a position that he apparently held until about January 1693/94. Presumably he sat on the Council while serving as secretary. He clearly held a seat by January 1693/94, when he was a Lord Proprietor's deputy, and did so until his death. As a Council member Walker was ex officio justice of several courts, including the General Court before 1698 and the Court of Chancery throughout his tenure. From March 1697/98 through March 1698/99 he was justice of the General Court by commission from the Council, which named him one of the justices of the quorum. In May 1698 he became the chief judge of the Court of Admiralty by appointment from the Council. He probably presided over the Admiralty Court for the remainder of his life.

At various times Walker held other offices, serving as member of the Assembly (1689), customs collector (1694), quit rent collector (ca. 1694), clerk of Chowan Precinct Court (1693–94), attorney general (1695), and escheator (1697). In 1699 he was a member of a commission appointed to settle the boundary with Virginia, but the boundary dispute was not resolved at that time.

On the death of Deputy Governor Thomas Harvey on 3 July 1699, the Council elected Walker to be its president and acting governor of the colony until appointment of Harvey's successor. Walker was serving as acting governor by 7 July and continued in that position until June or July 1703, when Robert Daniel assumed office as deputy governor.

Walker's administration was a relatively tranquil period for the North Carolina colony, but it was not free from problems. He came to office during a campaign by Crown officials in America and England who were seeking resumption of the Proprietary charters by the Crown and the consequent abolition of the Lords Proprietors' right to govern their American colonies. Particularly troublesome for Walker were Virginia officials who strenuously promoted charter resumption by strategies consisting in large part of allegations charging North Carolina officials with such offenses as harboring runaway slaves, pirates, and debtors and neglecting to punish Indians guilty of murder. Virginia officials also created incidents aggravating the long-standing boundary dispute. Such tactics provided excuses for sending arrogantly worded "protests" to Walker. The protests appear to have been drafted primarily for the eyes of London officials, to whom copies were sent as enclosures in lengthy complaints concerning the alleged difficulties of being neighbor to a Proprietary colony. Nonetheless, they required attention from Walker.

Crown officials in London also caused trouble for Walker by attempting to increase Crown control over Proprietary colonies without formal nullification of the Proprietors' charters. Those efforts occurred particularly in connection with implementation of navigation laws and establishment of vice-admiralty courts. Such actions often violated rights claimed by the Proprietors under their charters, and Walker was faced with the choice between disobeying his orders from the Proprietors or disobeying those of Crown officials. Walker sought to protect the Proprietors' interests and when possible evaded or temporized with respect to orders conflicting with those interests. Except for a few sharp replies denying charges by Virginia officials, he was diplomatic but unyielding in relations with officials of that colony. In 1701 the resumption movement was laid to rest for a time by Parliament's refusal to support it, and Walker's relations with Virginia and London improved.

Perhaps Walker's most significant accomplishment was initiation of the organization and establishment of the Church of England in North Carolina. Although many colonists held the Anglican faith, there was no organized Anglican worship in the colony in the seventeenth century—nor indeed in any faith except that of the Quakers. Under Walker's leadership the Assembly of 1701 passed a vestry act providing for Church of England parishes, vestries, church buildings, and clergy, and levying a poll tax to support them. Although the Proprietors later disallowed that act on a technicality, parishes were organized under it and foundations were laid for the subsequent establishment of the Anglican church in the colony.

Walker was not only an ardent Anglican, but also a loyal resident of the colony and an adroit politician. Consequently, he was able to secure passage of the vestry act of 1701 without engaging in the ruthless oppression of dissenters that characterized later efforts to establish the Anglican church. He died before such tactics were fully developed, so he was spared the pain of seeing the oppression, dissension, and violence that the colony later suffered in connection with the establishment movement he initiated.

Walker was Council president and acting governor in a period of relative prosperity for the colony, and he shared personally in that prosperity. He had extensive landholdings in Perquimans and Chowan precincts, was partner in an enterprise for buying and selling cattle, and was part owner of a sloop, the Dubartus, which traded with New England. He also had a large practice as a leading attorney in the colony, which the custom of the time permitted despite his position as judge on the higher courts.

Walker settled originally in Perquimans Precinct, but in the 1690s he was living in Chowan. In his last years his home plantation was about five miles from the present town of Edenton on a point in Albemarle Sound later called Moseley's Point and yet later, Skinner's Point. He was a member of the first vestry of Chowan Parish (now St. Paul's Parish) in Edenton. In that capacity he added his personal efforts and substance to his official influence on behalf of the Church of England.

Walker was married twice. His first wife was Deborah Green, whom he married on 7 Apr. 1686. Their daughter, Elizabeth, was born on 22 Feb. 1686/87. His second wife was Ann Lillington, the daughter of Alexander Lillington and his second wife, Elizabeth Cook. Walker married Ann on 20 Feb. 1693/94; there is no evidence that they had any children.

On his death at age forty-four, Walker was survived by his daughter Elizabeth and his wife Ann. He bequeathed a plantation, cattle and other stock, and household furnishings to Elizabeth; made bequests to his church, to the poor, and to several friends and relatives; and left the remainder of his estate to his wife. He was buried on his plantation, but his remains were later moved to St. Paul's churchyard, Edenton.

In 1705 Walker's widow married Edward Moseley, who had recently settled in the colony. She died on 18 Nov. 1732 and was buried beside Walker in the plantation cemetery. Her remains, like Walker's, were later moved to St. Paul's churchyard, Edenton.

"Henderson Walker's Will." North Carolina wills and inventories copied from original and recorded wills and inventories in the office of the secretary of state. Raleigh, Edwards & Broughton. 1912. http://digital.ncdcr.gov/cdm/ref/collection/p249901coll22/id/330351 (accessed February 12, 2013).