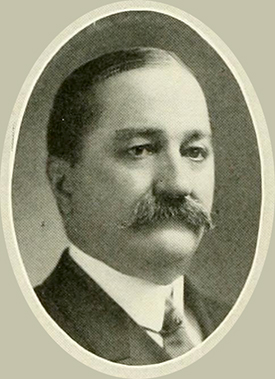 Platt Dickinson Walker, lawyer and associate justice of the North Carolina Supreme Court, was born in Wilmington, the only son of Thomas O. D. and Mary Vance Dickinson Walker. His father, a graduate of The University of North Carolina in 1843, was a wealthy lawyer, businessman, and railroad president. His maternal grandfather was Platt K. Dickinson, New England–born capitalist, head of a profitable Wilmington lumber business, and founder and investor in and lifetime director of the Wilmington and Weldon Railroad.

Born to privilege, young Platt grew up in a home of culture and refinement under his mother's guidance. He received his early formal education at Mr. or Mrs. George W. Jewett's school in Wilmington and then was sent to the Horner School in Oxford, an academy run by James H. Horner that trained a sizable number of future leaders of the state. Like his father and teacher Horner, Platt then went to the state university at Chapel Hill, one of only fifteen applicants in 1865 for a greatly diminished freshman class. At the commencements in 1866 and 1867 he distinguished himself as a speaker representing his class. By the latter year, however, the shrunken university (which soon would close for a few years) was in desperate straits and short of both money and students. Platt Walker transferred to the University of Virginia and studied law under the dean of the law school, Professor John B. Minor, graduating in 1869 with the LL.B. degree.

In June 1870 young Walker, earnest and hardworking, passed the first examination given by the North Carolina Supreme Court and was licensed to practice before that body. In the same year he became the law partner in Rockingham of locally prominent Walter L. Steele, a former state legislator and leader in the secession convention. Steele, a classmate at Chapel Hill of Horner and one year behind Walker's father, was also a cotton manufacturer and banker. Competing for several years against other able attorneys far more experienced in life and law than he was, Walker grew in stature as an able trial lawyer who carefully studied case law and marshaled his arguments adroitly before each day of court. To him, as a colleague later stated, the majesty and dignity of the law demanded respect and obedience from all. With such beliefs Walker, too learned an attorney to be a popular advocate, had a natural conservatism and maintained that citizens had a duty to obey both just and unjust laws.

In 1876 Steele was elected to Congress, and Walker moved to Charlotte, where he again joined forces with a prominent Chapel Hill graduate. His new partner, seventeen years Walker's senior, was Civil War veteran and local politician Clement Dowd, who for several postwar years had been law partner with popular wartime governor and governor-elect in 1876 Zebulon Vance. When Dowd was also elected to Congress in 1880, Walker associated with Armistead Burwell, another former partner of Vance and an acknowledged leader of the Charlotte bar.

Walker and Burwell were partners for twenty years, interrupted only for two years in the early 1890s when Burwell served as an associate justice of the state supreme court. Up to that time, despite his string of politically connected partners, Walker had held public office on only one occasion, serving a term as Democratic legislator from late 1874 to early 1875 for then-Republican Richmond County. In 1884 he was defeated as the Democratic nominee for state attorney general. Turning their attention to their legal practice, Walker and Burwell developed an enviable reputation and appeared on one side or another in nearly every important lawsuit in the Mecklenburg region. The partners had many corporate clients and frequently worked on litigation in other parts of the state. Perhaps as a result of these endeavors, Walker was unanimously elected the first president of the North Carolina Bar Association in 1899.

In 1902 Walker won election as a Democratic associate justice of the state supreme court. He was reelected and served until he died in 1923. His over two decades on the court were surpassed at that time only by Chief Justices Thomas Ruffin, Richmond Pearson, and Walter Clark. Devoted to duty and legal study, Walker likely wrote over two thousand opinions for the court and placed extremely high value on precedent and legalism. He reportedly recognized that new conditions might require new laws but refused to alter his conservative belief that legislatures, not courts, should write laws. To Walker it was a greater evil for a court to correct a social or economic wrong by unconstitutional judicial legislation than to leave the issue uncorrected. In such conservatism he generally was aligned with most of his colleagues and many North Carolinians of the era. One notable exception was Walter Clark, who became chief justice when Walker joined the court. A Civil War veteran and 1864 graduate of The University of North Carolina, Clark vigorously fought the large railroads and tobacco companies while supporting numerous progressive social reforms and writing many dissenting opinions.

Conservative on a chiefly conservative court, Walker was active in legal societies. He divided the rest of his life between home and organizations, marrying Henrietta Settle Covington (d. 1907) in 1878 and Alma Locke Mordecai in 1910; apparently there were no children by either marriage. An Episcopalian, Walker served as a vestryman for many years. He also was a trustee of The University of North Carolina (1901–5) and president of the North Carolina Literary and Historical Association (1909–10). For years he maintained an interest in politics and business in Charlotte. He was buried in Wilmington.

Daniel L. Grant, Alumni His tory of the University of North Carolina (1924).