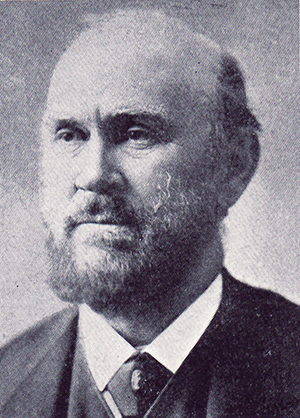 John Dalton Whitford, legislator, railroad president, soldier, and historian, was born in New Bern, the son of Hardy (1793–1841) and Mary James Clark Whitford (1800–1884), who were married on 23 Dec. 1820 at New Bern. His maternal grandfather was Elijah Clark (8 Nov. 1774–19 June 1862), a mayor of New Bern, trustee of the New Bern Academy, and sheriff and trustee or treasurer of Craven County. At the grandfather's home on 11 May 1809 the First Baptist Church of New Bern was organized.

When only twenty-one, John D. Whitford was elected mayor or "intendant" of New Bern. Under his administration local ponds were drained, creeks filled, streets improved, and brick sewers constructed. The old sewers were among the first, if not the first, underground aqueducts of the kind built in North Carolina. At his instigation was erected the shellrock wall that still protects Cedar Grove cemetery. In his day such a wall was essential, for hogs, goats, and cattle were allowed to roam through the city streets.

Upon organization of the state-controlled Atlantic and North Carolina Railroad company in New Bern, with the first general meeting of stockholders held during 20–21 July 1854, he was elected its president; he continued in the post for the next decade with gratifying success except during the Civil War. Whitford was a director of the North Carolina Railroad Company, which operated trains between Goldsboro and Charlotte. Also a later member of a state commission for the improvement of Neuse River, he was a delegate in 1884 to the River and Harbor Convention at Savannah, Ga.; for a period thereafter he was superintendent of certain river improvements in the state authorized by the federal government.

An early member of the New Bern Light Infantry, formed during the mid-nineteenth century, Whitford on 4 July 1859 was publicly presented with a pitcher cast from silver dollars donated by its members "as a token of respect and esteem." From this company he and Jacob Brookfield became the first two volunteers for the Confederate army. He had been a member of the 1861 state convention that passed the ordinance of secession. Whitford was commissioned first a captain, then a major, and later a colonel.

Serving with General Lawrence O'B. Branch, he participated in the Battle of New Bern in March 1862 and in the fighting around Kinston and other parts of eastern North Carolina. For some time he had charge of the transportation of troops and munitions of war through the state. He was also state agent for the purchase of cavalry equipment and other war materials. His work was so effective that he received a complimentary letter from General Robert E. Lee. At the close of the war he was elected to represent Craven County in the 1865–66 state senate, getting more votes than any candidate for public office had ever received in the county up to that time.

In June 1866 Whitford was again chosen president of the Atlantic and North Carolina Railroad, and he was reelected several times afterwards. At the 1867 stockholders' meeting he was officially thanked for his "able and efficient administration of the affairs of this company during the last year. More especially does this company owe to his untiring energy the funding of the remainder of the debt due to the state, and thereby rendering it possible for the stockholders to realize within a reasonable time some return for their investments."

Immediately after his war service he was instrumental in establishing at New Bern the firm of Whitford, Dill and Company, shipping and commission merchants and agents for Murry, Ferris and Company, owners of the first line of steamers operated successfully between New Bern and New York.

For more than sixty years he was a member of St. John's Lodge No. 3, AFAM, of New Bern. In the mid-nineteenth century he financed the decorating of its Blue Lodge room, including the notable trompe l'oeil paintings still colorful on its walls and ceiling in the late 1990s. Apparently unique in the state, they helped qualify the Masonic temple for the National Register of Historic Places. In 1869 he was named a director of the North Carolina Masonic Mutual Life Insurance Company, formed in 1867 by Masons at New Bern. The lodge instructed a committee in June 1886 to work with Whitford in presenting claims against the government for occupation and damage in the lodge room and temple during the Civil War. Later he was thanked for his "kind efforts" in this regard, which helped to obtain a cash award for the lodge.

A longtime leader in the First Baptist Church, he was the author of "The Home Story of a Walking Stick—Early History of the Baptist Church at New Bern, N.C." Available in manuscript, it is a virtual history of his native town.

After his death and burial in Cedar Grove Cemetery, New Bern, Judge Romulus A. Nunn of New Bern wrote of him:

Probably no man has ever lived in New Bern who was more useful in developing certain features of our commercial life. He provided transportation by land and water. Undoubtedly the people of the east who now enjoy the fruits of his labor owe to him a debt of gratitude, which should never be forgotten.

He lived to see the great celebration which was held in 1910 to commemorate the 200th anniversary of the founding of the town. As a courtesy to him, the parade was arranged to pass his house and he was visibly affected as he witnessed from his window the floats depicting the events in our history in which he had had so large a share and which he had written up in his admirable manuscript, "Historical Notes." A few months later . . . he died and closed a long life of honor and usefulness, in the 86th year of his age.