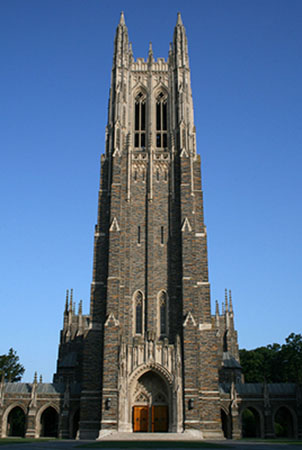 Duke Chapel is the largest, most prominent building of Duke University’s historic West Campus. James B Duke, founder of the University, wanted the church to be the central building of the campus in order to have a profound influence on the spiritual lives of the students. As a result, it was the first building planned for the University, but the last building completed. Its cornerstone was laid on October 22nd, 1930. The chapel was first used for the commencement of 1932, but was not formally dedicated until June 2nd, 1935.

The chapel’s chief designer was Julian Abele, a prominent African-American architect from Philadelphia. Abele designed the chapel with an English neo-gothic style, modeled after the buildings at Oxford and Cambridge. This style is characterized by large stone piers, arches, ribbed vaults, and vast interior space. Abele faced severe discrimination under North Carolina’s Jim Crow laws, and was never able to see his completed work.

The chapel’s interior is spacious, measuring 291 by 63 feet. It has a capacity of 1,500 people. The tower reaches 210 feet high and can be seen from almost any point on west campus.

There are 77 stained glass windows in the chapel, depicting biblical characters and stories. The upper windows show scenes from the Hebrew bible, while the lower windows depict the New Testament. They were the first completed set of windows in the United States to show the complete story of both biblical testaments. More than 1 million individual pieces of glass were used to create the windows, primarily in shades of yellow, red, and blue.

The stone used for the chapel, dubbed “Hillsborough bluetone,” was from Duke quarry, near Hillsborough, North Carolina. It occurs in 17 different shades of color, from rust orange to slate gray. The trimmings and vaults were crafted with limestone from Bedford, Indiana. In total, the chapel cost $2.2 million to build. In 2015, Duke University invested in a $19.2 million dollar restoration project for the chapel.

The outside of the chapel displays sculptures of several prominent historical figures. In the portal are found sculptures of several Methodist leaders (John Wesley, Thomas Coke, Francis Asbury, and George Whitefield). Though the chapel is non-denominational, these four statues honor the Duke family, who were Methodist. To the right are the Southern historical figures Thomas Jefferson, Robert E Lee, and Sidney Lanier. To the left are the prominent Christian reformers Girolamo Savonarola, Martin Luther, and John Wycliffe.

The Memorial Chapel located is just off of the main area of the chapel behind iron gates. Limewood figures of St. Paul, St. Peter, and Jesus overlook entombments of Duke University founders Washington Duke, Benjamin Duke, and James Duke. 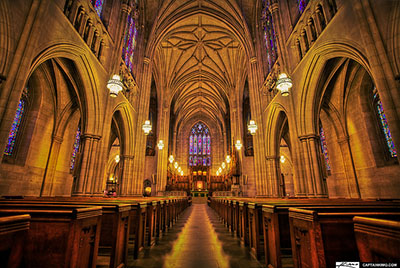 Below the chapel, six people are entombed in the Duke crypt:

Also in the crypt are the ashes of James A. Thomas, James T Cleland, and Cleland’s wife Alice Mead Cleland.

The chapel is home to three permanent historic pipe organs: the Kathleen Mcclendon Organ (1932), the Benjamin N Duke Memorial Organ (1976), and the Brombaugh Organ (1997). A fourth portable organ was added in 2014 for small musical groups.

Duke Chapel houses over 200 worship services per year, and is also a popular venue for concerts, ceremonies, weddings, and funerals. Since the inaugural wedding in 1933 over 6,000 couples have said their vows in the chapel. Many noted leaders have given lectures or speeches there, including Maya Angelou, Desmond Tutu, and Billy Graham. In total, as of 2014, the chapel averaged over 240,000 visitors per year.

Duke Chapel on a Clear Day. Photo by Ildar Sagdejev.

Interior of the Duke University Chapel. Photo by Kim Seng.