Thomas Eastchurch (d. ca. January 1678) became Albemarle’s governor with cunning and the aid of the proprietary faction. Little is known about his family background; however, the Lords Proprietors described Eastchurch “to be a gentleman of a very good family.” By October 1669 Eastchurch was serving as surveyor general of Albemarle County. This was not the position coveted by Eastchurch. He wanted to be governor of Albemarle. Before his in death 1673, Lord High Treasurer Thomas Clifford, a relative of Eastchurch, recommended him to the Lords Proprietors for the governorship. Several proprietors promised the position to Eastchurch, but he did not obtain the post until he forcibly took power from Governor John Jenkins.

In fall 1675 the proprietary faction won control of the assembly. Elected speaker, Eastchurch had Jenkins, a leader in the anti-proprietary faction, arrested and imprisoned for “severall misdemeanors.” Eastchurch assumed the chief executive powers, but maintained the title of speaker. By spring 1676, Jenkins had escaped from prison with the aid of his supporters and reestablished himself as governor. Albemarle evidently functioned briefly with two chief executives. Eastchurch departed for London to appeal to the Lords Proprietors. 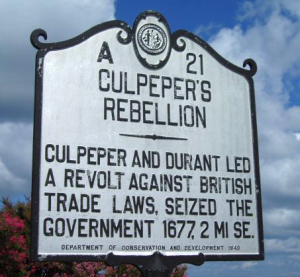 Eastchurch departed for Albemarle in summer 1677. During a stopover in the West Indies, Eastchurch met and married a wealthy woman (her name is not known). Deciding to extend his honeymoon, Eastchurch appointed his traveling companion and fellow proprietary appointed official, Thomas Miller, as acting governor. Miller, a supporter of Eastchurch, arrived in Albemarle in July 1677 and claimed the governorship. By December of that year, Miller’s misdeeds led to a revolt (Culpeper's Rebellion) by the colonists. The revolt led to Miller’s imprisonment and subsequent trial.

Eastchurch arrived in Virginia in December 1677, but he did not proceed immediately to Albemarle due to the rebellion. He issued a proclamation calling for the disarming of the colonists, for the release of prisoners, for the restoration of Miller’s government, and for the appointment of a delegation to visit Virginia to explain the causes of the revolt. The proclamation was ignored, but it did stop Miller’s trial. The anti-proprietary leaders sent an armed force to northern Albemarle County to keep Eastchurch out of the colony. Eastchurch tried to gather a force in Virginia to invade Albemarle. He called on Virginia Governor William Berkeley for troops, yet his plan never materialized. Eastchurch developed a fever and died in Virginia in early 1678.

Powell, William Stevens. 1958. Ye Countie of Albemarle in Carolina: a collection of documents, 1664-1675. Raleigh: State Dept. of Archives and History.