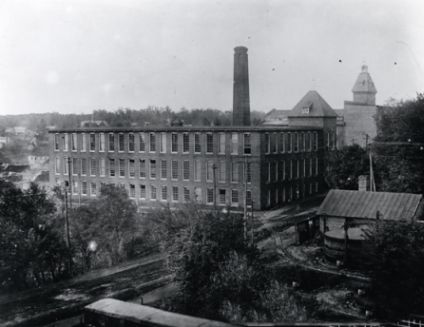 Electric power, at the start of the twentieth century, was a novelty and a luxury in North Carolina. The first electric lighting in the state came from the arc lamps installed in the Arista Cotton Mill in Salem in 1881. Arc lamps ran off a generator, a device consisting of a rotor inside a magnetic field. Cutting the magnetic flux produced electricity. Thomas Edison and his associates developed a practical incandescent lamp in 1879 so that houses could have electric lighting, but the dream of available, affordable power was years away.

Raleigh's board of aldermen authorized an electric lighting system for the city's streets in October 1885. The Thomson-Houston Electric Light Company supplied the power for arc lights that were turned on in December of that year. Durham Electric Light Company illuminated that city's streets a few weeks later, and Thomson-Houston switched Charlotte's streetlights from gas to electricity in 1886. Arc lights arrived in Winston (which later became Winston-Salem) in 1887, in Asheville and New Bern in 1888, in Goldsboro and Henderson in 1890, in Wilmington in 1891, in Fayetteville in 1895, and in Asheboro in 1900.

The state legislature chartered two electric companies in 1881, four in 1889, six in 1891, and three in 1905. Early companies typically produced steam to run a generator. Interruptions were frequent, and the voltage fluctuated. Small power plants often only operated from dusk until midnight. On nights when the moon was bright, streetlights were sometimes switched off to save fuel. Hydroelectric plants could utilize the power of moving water to produce large quantities of electricity, but construction costs were enormous. Mills, especially sawmills, increased production by lighting their facilities with a steam engine and a generator.

The first electric railway system in North Carolina opened in Asheville on 6 Feb. 1889, running from the public square to the railroad station. Raleigh's railway system switched to electricity in 1891, and other cities added streetcars, which ran until they were replaced by buses in the 1930s. Supplementary census figures for 1902 listed 38 private and municipal North Carolina power stations and 488 miles of power lines. Revenues came to $84,196 for arc lighting, $141,460 for incandescent lighting, and $95,527 for other electric services.

In 1905 James B. Duke, Walker Gill Wylie, and William States Lee organized the Southern Power Company (which later became Duke Power Company), building a string of textile mills and hydroelectric plants along the Catawba River. As the North Carolina textile industry expanded, many mill owners, before signing on with the power company, bargained for electricity for their employees' homes. Lee went on to design and build 32 hydroelectric stations and 7 steam-electric stations, and he also became a pioneer in wire-transmission systems.

In 1908 the Raleigh Electric Company, the Central Carolina Power Company, and the Consumer Light and Power Company merged to form the Carolina Power & Light Company (CP&L). The advent of the electric utilities propelled North Carolina's evolution from an agricultural state into a manufacturing one. Wiring a house or business was expensive, so utilities sent out traveling salesmen to stir up interest in electricity. The utilities sold electric appliances and offered free maintenance.

In 1913 the General Assembly placed electric power companies under the regulation of the Corporation Commission. The North Carolina Utilities Commission took over in 1941, eventually becoming a seven-member body, appointed by the governor, serving as part of the Department of Commerce.

The federal government created the Tennessee Valley Authority (TVA) in 1933 and the Rural Electrification Administration (REA) in 1935. As part of the Roosevelt Administration's New Deal, the TVA built dams in western North Carolina on the Hiwassee and Little Tennessee Rivers, bringing hydroelectric power to several counties. Serving under the U.S. Department of Agriculture, the REA provided farms with electricity and big power companies with wholesale customers. The North Carolina legislature had created a state REA and passed the Electric Membership Corporation (EMC) Act just before the federal agency's appointment. Electricity was not available to all rural residents until well after World War II. EMCs were cooperatives owned by their members. With low-cost loans from the REA, EMCs strung lines and supplied power to rural areas.

During the war years of the 1940s, the utilities supplied power outside of their territories to the defense industry. CP&Lstock became available for public trade on the New York Stock Exchange in 1946, and Duke Power followed in 1961. The possibility of producing electricity from nuclear fission prompted Duke and CP&L in 1956 to form the Carolinas-Virginia Nuclear Power Associates, Inc. Another member was Virginia Electric & Power Company, which supplied electricity as North Carolina Power to residents of the northeastern part of the state. The new nuclear organization pooled information and built an experimental station to run tests. CP&L's Brunswick Plant, the first nuclear-fueled electric generating station in North Carolina, began commercial operation in 1975.

By the beginning of the twenty-first century, North Carolinians received electricity either from one of the three major power companies, municipal systems, or EMCs. Power generation came from nuclear reactors, coal- or oil-fired units, hydroelectric and pumped storage plants, and combustion turbine generators. North Carolina has had a history of receiving electricity at costs below the national average. Probably for this reason, per capita usage in the state typically has run above that of other states.