The Textile Industry and Winston-Salem

Tobacco and textiles played a role in Forsyth County from the very beginning of the Wachovia settlement. But from the 1880s to the 1980s, these two industries dominated the industry and cultural environment of Winston-Salem like no others.

Working with fabrics started simply but was an essential activity in the wilderness settlements of Bethabara, Bethania and Salem. One of the first workers chosen to settle in Salem in 1767 was Gottfried Praetzel, a weaver. Weaving linen and sewing leather gloves also provided a successful business for Salem’s Single Sisters. Most items were consumed by the towns’ residents, but excess goods became part of the towns’ commerce with other settlers.

The town and the textile business began to change in 1837 with the decision to open the Salem Cotton Mill on today’s Brookstown Avenue. Never fully successful, the mill marked the first time that the Salem Moravians employed non-Moravians in a business of theirs. In 1854, it was bought by former N.C. governor John Motley Morehead, but returned to local ownership after the Civil War when the Fries family acquired it. In 1880, a large addition to the original structure created Arista Mills.

Francis Fries started in textiles as superintendent of this cotton mill, which by 1840 was running satisfactorily. He left to create his own wool carding factory. It expanded to include spinning machines in 1842 and hand looms in 1843. This mill produced "popular heavy jeans cloth, inexpensive lindseys, and more costly fine dyed woolens," according to the Old Salem Guidebook.

In 1846, Francis’ brother Henry joined the firm, which was renamed F. and H. Fries. During the Civil War, sturdy gray cloth from the Fries mills helped to clothe the Confederate Army. And though Francis died in 1863, Henry had the training to keep the business alive, and his nephews carried it forward until well into the next century. In 1903, Henry’s Southside Cotton Mills merged with Arista, and the larger Arista produced textiles until 1970.

Meanwhile, the Chatham Manufacturing Company moved from Elkin in 1906, welcomed by a freshly macadamized road to its new plant. A specialist in woolen blankets, Chatham soon bought a huge percentage of the N.C. Cooperative Wool Sales’ annual production.

The turn of the century also marked the sale of the P.H. Hanes Co. – a successful plug tobacco company – to R.J. Reynolds. Rather than retire, owners Pleasant Hanes (age 55) and John Wesley Hanes (age 50) chose to take their sale proceeds and start textile companies.

In 1901, John opened Shamrock Hosiery Mills to make infants’ and men’s socks. Later renamed the Hanes Hosiery Mills, the company, expanded to include women’s goods, became "the largest producer of circular knit hosiery in the world."

Meanwhile, Pleasant and his two sons set up P.H. Hanes Knitting Company in 1902, becoming the first Southern company to focus on the manufacture of knitted underwear; the partnership became a corporation a year later.

Pleasant was reportedly very pleased when the plant reached production of 1,000 garments each day. "It would grow into a plant that would easily produce a thousand garments per minute," an author noted.

When the P.H. Hanes business had advanced by 1910, the company decided to manufacture its own yarns, building a spinning mill at Hanes, N.C. (now Stratford Road). A mill village — a self-contained community constructed close to the plant – remained a significant entity until well into the 1930s, and the plant continued into the 21st century.

The Hanes name continued to dominate the textile world of Winston-Salem through the Depression and beyond. Finally, in 1965, the two companies merged. The new Hanes Corporation was described by Gordon Hanes as "a union between kinpeople and good friends." Continued innovations such as L’eggs and acquisitions helped maintain a leadership position.

The top Winston-Salem brand name in textiles eventually became part of the Sara Lee Corporation, but in 2006, emerged once again as an independent maker of brand-name t-shirts, bras, panties, men’s and kids’ underwear, socks, hosiery, casualwear, and activewear. While Hanesbrands Inc. and other textile producers have been buffeted by changing competition and their own efforts to create cost-competitive products, the textile industry is still playing a role in the mix of businesses that make Winston-Salem vital. 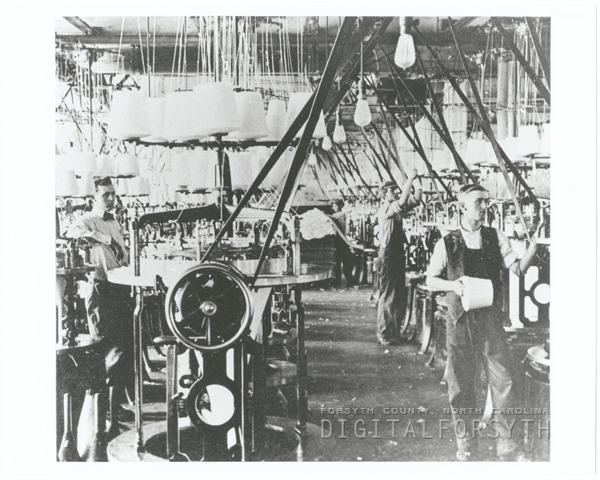 Photograph depicting the first Hanes Knitting factory, sometime in the first decade of the twentieth century. 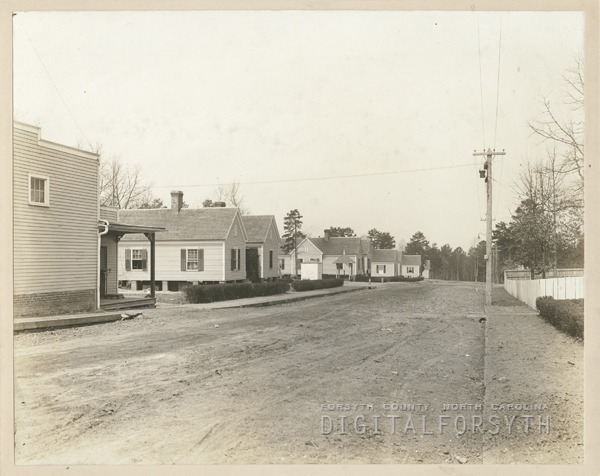 Photographs of new homes in the P.H. Hanes mill village, 1910.