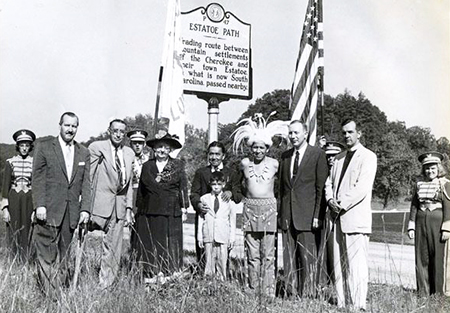 Estatoe Path was a long-established Indian trail that linked the eighteenth-century Cherokee Lower Towns of northwestern South Carolina and northeastern Georgia with the French Broad River Valley in western North Carolina. It may have originated at the site of Old Estatoe, located on a branch of the Upper Tugalo River near Clayton, Ga. However, it is more often described as originating with the cluster of Lower Towns, including Keowee and a different town of Estatoe on the Upper Keowee River in South Carolina. This path headed north, crossing into North Carolina's present-day Transylvania County to the vicinity of Rosman, where a large Cherokee town was apparently located. The path then followed the French Broad River Valley and ultimately reached the Toe River Valley. It is possible that the Mitchell County community of Estatoe derived its name from the nearby path.