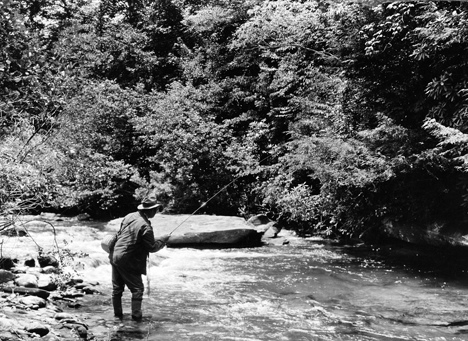 Forests have played a vital role in virtually all aspects of North Carolina's environmental health and economic development. The first European settlers in the region that would become North Carolina found the majority of the landscape covered with forests. Huge numbers of trees were subsequently cleared away to create farmland or for use-oak being an especially good material-in a variety of essential products, such as planks, casks, barrels, hogsheads, staves, hoops, and shingles. In colonial times, oak barrels were the principal packaging for oceangoing cargo such as tobacco, wine, flour, and pickled deer hides, and oak bark was an important export; it was also essential for tanning and an ingredient in medicines designed to treat such maladies as throat infections, hemorrhages, diarrhea, and consumption. The durability as well as distinctive pattern and coloration of oak lumber were attractive to the makers of furniture, flooring, molding, mantelpieces, wainscoting, and cabinetry. Longleaf pine trees were used to make naval stores such as tar, pitch, and turpentine, with a vast amount of these products being exported to England from the seventeenth century to the Civil War era.

Practically no virgin forest remains in North Carolina; two-thirds of the state is classified as commercial forestland or land capable of producing usable trees, and the state's lumber industry thrives. Pine trees supply local pulp and paper mills as well as some furniture producers. A variety of manufacturers use the state's mixed hardwoods to make flooring, cooperage, veneer, plywood, excelsior, furniture, fixtures, and railroad cross ties.

While matters of economy continue to involve the state's forests and trees, greater emphasis has been placed on their essential role in the quality of North Carolina's natural environment. In 1892 George Washington Vanderbilt, owner of the Biltmore Estate, hired Gifford Pinchot as the nation's first professional forester. Six years later, the first forestry school in the United States began at Biltmore under the direction of Carl A. Schenck, Pinchot's successor. Because of the work of this school and subsequent governmental and private organizations, North Carolina has focused on the importance of forests and forest management for decades.

Before the clearing of land for agriculture began, forests contributed to the development of rich, fertile layers of topsoil through the recycling of nutrients and decomposition of organic matter. In many cases, the topsoil has been mostly destroyed by more than 300 years of land clearing for agriculture and the development of urban areas. Forests have been irreplaceable in maintaining water quality and quantity by lessening erosion and stabilizing the flow of water into streams and rivers. They provide habitats for a number of the state's rare and endangered plants and animals as well as other species such as black bear, squirrel, white-tailed deer, and raccoon. They also have great value for recreational activities such as hunting, fishing, picnicking, hiking, bird watching, horseback riding, and mountain hiking. Finally, many North Carolinians value the state's forests simply for their beauty and for the sense of permanence and solitude they give the landscape.