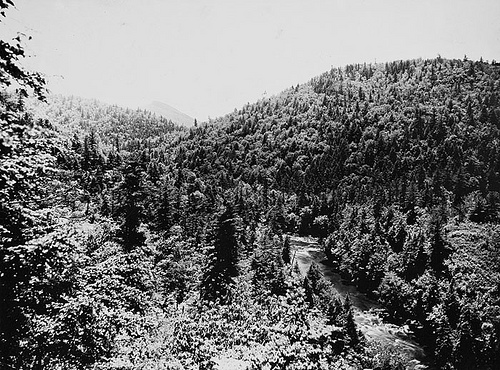 North Carolina forests contain the largest diversity of temperate and tropical tree species in the eastern United States. This abundance of species is due in large part to the wide variations in temperature, moisture, and soil that exist in the state's three geographic regions, the coastal plain, the piedmont, and the mountain region. North Carolina's tree population can be divided into two distinct groups. Conifer trees, also called evergreens or softwoods, have needles or scales for foliage and create cone-bearing fruits. Broadleaved trees, or hardwoods, generally lose their foliage each fall. The three regions of the state are rich in a variety of trees, including loblolly, longleaf, shortleaf, and southern pine and upland and lowland hardwoods, especially varieties of oak. Indeed, settlers in the area designated the land either "oakey" or "piney," illustrating the prevalence of these particular types of hardwoods and softwoods.

Eight of the 60 species of pine trees flourish in North Carolina: the loblolly, longleaf, short-leaf, Eastern white, pitch, pond, Virginia, and table mountain pine. Of these, the loblolly and longleaf are the best known. The loblolly, also known as the black pine and the Carolina pine, is the dominant pine of much of the Southeast. The loblolly is extensively used in the production of pulp, paper, plywood, and lumber and is one of the most commercially important trees in the region.

Thirty or so species of oak trees may be found in North Carolina, of which about half are quite common. There is much distribution of species by region; live oaks-often bearded with Spanish moss-are found only in the coastal plain, northern red oak only in the mountains. Turkey oaks seem to thrive mainly in the Sandhills. White oaks and post oaks are found together, as are black oaks and scarlet oaks, and water oaks and blackjacks.

Beech trees are divided into two main types: the American beech and the European beech. These large trees often dominate forests; other plants are unable to grow because of the intense shade produced by dense layers of elliptical, long-pointed leaves, the depth of fallen leaves, and surface roots. Present in North Carolina since 8000 B.C., beech trees are not in the majority today but have maintained a definite forest presence. They are popular ornamentals, often planted in parks, cities, and private yards. Attesting to the tree's longstanding presence are at least 37 North Carolina locations beginning with the word "beech."

American chestnut trees once covered 30 million acres of North Carolina forests as the dominant hardwood tree species in the eastern United States. Native Americans harvested chestnuts and used them in bread, and colonists used them as a stuffing in roasted fowl dishes or in a special sauce made with gravy and 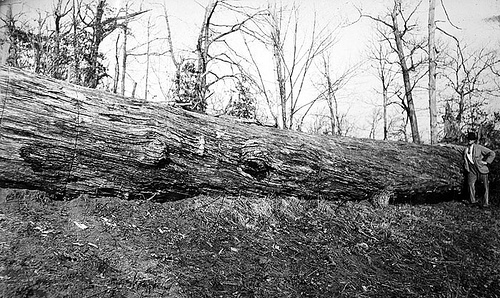 thickened with butter. Families gathered bushels of nuts in the fall and ate them raw, boiled, and roasted or sold them for goods. Settlers also used chestnuts to feed hogs and turkeys, and the wood made excellent shingles and fence posts because of its straight grain and high acidity. Commercial uses of the rot-resistant chestnut wood included tannin, lumber, pulpwood, telephone poles, ship masts, railway ties and caskets.

A blight-an Asian fungus from imported nursery stock first appearing on mature chestnuts in the New York Zoological Park-hit American chestnuts in the early 1900s, wiping out nearly the entire species. The fungus killed trees within two or three years by choking the flow of water and sap. The blight moved southward at the rate of 50 miles per year and eventually reached the entire natural range of the chestnut in North Carolina. Despite control efforts, the fungus destroyed nearly every mature chestnut within its natural range in less than 50 years.

American chestnut root systems continue to produce sprouts, but the lifespan of the trees is very short. In an effort to increase the chestnut tree population, plant pathologists spent decades in unsuccessful attempts to cross the American species with the blight-resistant Chinese chestnut. However, the American Chestnut Foundation, founded in 1982, successfully maintains several thousand trees in its experimental farms in southwestern Virginia. Scientists have studied the blight by deliberately injecting trees with the fungus and cross-breeding to create a blight-resistant offspring.

The red mulberry, North Carolina's only native mulberry, is found throughout the state and most of the eastern United States. The reddish fruit-which makes mulberry wine when fermented-is relished by wildlife, swine, and poultry, a fact that led most North Carolina homesteads to keep mulberry orchards up until the early 1900s. Mulberry leaves are the primary food of silkworms and were utilized in North Carolina from colonial times until around 1850 in the silk industry.

The sassafras tree grows throughout the eastern United States, although it is most common in North Carolina in the coastal plain and piedmont. Fossils of sassafras trees dating from the Cretaceous period (125 million to 60 million years ago) have been found in North Carolina, making it one of the first known types of trees in the state. The entire plant is aromatic, but the root bark and its derived oil have been most often used over the centuries as a tea, flavoring, and medicine. Sassafras had an almost magical reputation as a cure for a host of illnesses; a superstition claimed that merely carrying sassafras wood in one's pocket would ward off diseases. The dried, powdered leaves are used to thicken soups and other dishes in Cajun and other cuisines. Federal regulations now prohibit the commercial use of sassafras in food products.

Two species of walnut trees, among the least plentiful hardwoods found in the state's commercial forest land, are native to North Carolina. The black walnut, although most abundant in the piedmont, can be found throughout the state, usually in low-lying areas where the soil is rich and moist. The white walnut grows primarily in the mountains. Native Americans stored and used the sweet, edible nut for food and body oil. During their expedition of 1584 on behalf of Sir Walter Raleigh, Philip Amadas, Arthur Barlowe, and their men received walnuts and other foods from Granganimeo, brother of Wingina, head of the tribe that inhabited Roanoke Island. Because of the wood's durability and resistance to worms, shipbuilders used black walnut on the bottom of boats, and cabinetmakers during the eighteenth and nineteenth centuries favored black walnut over other native hardwoods. Thomas Day, a free black cabinetmaker working in Milton before the Civil War, used walnut as well as maple and mahogany for his pieces.