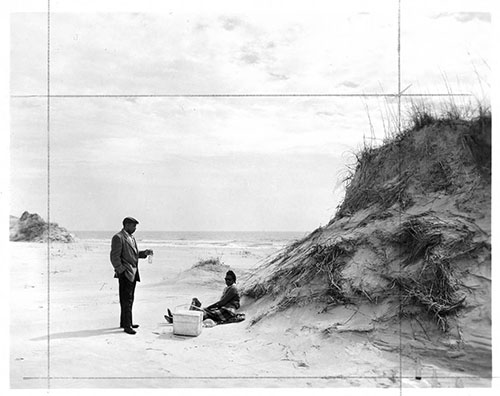 Due to its location, Bear Island has often played a role in the protection of the mainland. During the Civil War, Confederate troops on the island defended it against Union forces occupying Bogue Banks. The island again assumed military importance nearly a century later during World War II when the Coast Guard used it to secure the coast and monitor German U-boat activity.

The NCTA formed the Hammocks Beach Corporation and began fundraising efforts to develop facilities on the mainland. Association members contributed more than $146,000 to build cabins, a bathhouse, and other recreational amenities. Efforts to provide access to the Bear Island beaches proved unsuccessful with prohibitive costs for building a bridge. The Corporation approached the state in 1956 with interest in turning the site over for a state park, but disagreement over terms and legal issues halted transfer until 1961. The state park opened in May, 1961 for African Americans. The park was later integrated with passage of the federal Civil Rights Act in 1964.

In May of 2015, an additional 199 acres of park land were added to the mainland portion of the state park to increase park facilities. The land had been previously owned by heirs of John Hurst.

Except for 33 acres on the mainland, Hammocks Beach State Park is located on Bear Island and Huggins Island.

Bear Island is an 892-acre barrier island. The island, 3.5 miles long and less than a mile wide, is bordered by the Atlantic Ocean to the south and by salt marshes, estuarine creeks and the Intracoastal Waterway to the north. Bogue Inlet lies at the northeast end of the island; Bear Inlet lies to the southwest.

Shrub thickets and maritime forests create a wilderness environment while other areas of the island feel like desert. Seawater has not washed over the island in recent years. Large dunes and sand ridges dominate the landscape. Migrating sand, carried by the wind, often buries portions of the maritime forest.

The loggerhead sea turtle is found on the island. Between mid-May and late August, female loggerheads come ashore at night to nest above the high-tide line. Weighing from 150 to 300 pounds, the females nest every three or four years, laying up to six nests a year. Nests range from 10 to 20 inches deep and often contain 120 eggs. The eggs are about the size of ping-pong balls. After a two-month incubation, the hatchlings emerge from the nest and race to the sea.

Huggins Island, located just east of Bear Island in the mouth of Bogue Inlet, is a 225-acre island visible from downtown Swansboro. The island consists of 115 acres of upland area surrounded by 96 acres of lowland marsh. The island's varied natural habitats and cultural resources contributed to the its inclusion in the state parks system.

Huggins Island is home to a maritime swamp forest, which is listed as a Globally Rare and Significant Area. Huggins Island has a rich history, from Native American fishing and hunting grounds, to being home to a Confederate six-cannon battery in 1861-62. Its commanding view of Bogue Inlet and the town of Swansboro was an obvious strategic value. Huggins Island's thick, dense maritime forest is a stark contrast to Bear Island's sandy beach and open dunes bursting with sea oats.

Hammocks Beach is also a haven for migratory shore birds who feed in tidal marshes and rest on the beach in the spring and fall. Watch herons and egrets search for food or witness osprey plunging into tidal creeks to capture fish. Bottlenose dolphins swim offshore, while white-tailed deer, raccoons and gray fox inhabit inland areas.