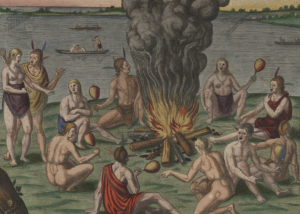 Over four hundred years ago, English colonists trying to settle on Roanoke Island encountered many Native Americans along the coast. At that time more than thirty Native American tribes were living in present-day North Carolina. They spoke languages derived from three language groups, the Siouan, Iroquoian, and Algonquian.

None of the prehistoric Native Americans who lived in North America had developed any sort of written language. They relied instead on oral traditions, such as storytelling, to keep records of their origins, myths, and histories. Our present knowledge of prehistoric inhabitants of this state depends on rare early historical accounts and, especially, on information gained through archaeology.

Archaeologists can trace the ancestry of Native Americans to at least twelve thousand years ago, to the time of the last Ice Age in the Pleistocene epoch. During the Ice Age, ocean levels dropped and revealed land that had previously been under the Bering Sea. Native American ancestors walked on that land from present-day Siberia to Alaska. Evidence suggests that their population grew rapidly and that they settled throughout Canada, the Great Plains, and the Eastern Woodlands, which included the North Carolina area.

The climate on the eastern seaboard was wetter and cooler twelve thousand years ago. Many species of animals roamed the forests and grasslands of our area, including now extinct examples of elephants (mastodons), wild horses, ground sloths, and giant bison. Other animals, now absent from the Southeast, included moose, caribou, elk, and porcupines.

Paleo-Indians, as archaeologists call those first people, hunted for these animals in groups using spears. They used the animals’ meat, skins, and remaining parts for food, clothing, and other needs. They also spent considerable time gathering wild plant foods and may have caught shellfish and fish. These first inhabitants of North Carolina were nomads, which means they moved frequently across the land in search of food and other resources.

Archaic people, like their ancestors, were nomads. They traveled widely on foot to gather food, to obtain raw materials for making tools or shelters, and to visit and trade with neighbors. Some Archaic people may have used watercraft, particularly canoes made by digging out the centers of trees.

These Archaic Indians did not have three things that are commonly associated with prehistoric Indians—bows and arrows, pottery, or an agricultural economy. In fact, the gradual introduction of these items and activities into North Carolina’s Archaic cultures marks the transition to the Woodland culture, which began around 2000 B.C.

Woodland Indians followed most of the subsistence practices of their Archaic ancestors. They hunted and fished and gathered food when deer, turkeys, shad, and acorns were plentiful. But they also began farming to make sure they had enough food for the winter and early spring months, when natural food sources were not available. They cleared fields and planted and harvested crops like sunflowers, squash, gourds, beans, and maize.

The Woodland Indians also developed bow-and-arrow technology. With a bow and arrow, Indians could hunt more efficiently, using single hunters instead of groups of hunters.

Archaeological evidence suggests that Woodland Indians were much more committed to settled village life than their ancestors had been. Though remains of their settlements can be found throughout North Carolina, these Indians tended to live in semi permanent villages in stream valleys.

Mississippian Indians were more common in other parts of the Southeast and Midwest. They had a hierarchical society, with status determined by heredity or exploits in war. They were militarily aggressive and fought battles to gain and defend group prestige, territories, and favored trade and tribute networks. The surviving, often flamboyant artifacts from Mississippian Indian sites reflect the need that those individuals felt to show their status and glorify themselves.

Measuring the involvement of historic North Carolina Indians with those large, powerful Mississippian groups is very difficult. Some minor elements of Mississippian culture can be found in various parts of our state, particularly in pottery types or religious or political ornaments. The Algonquian-speaking Indians met by the Roanoke Island colonists reflected some Mississippian influence, as did the later Cherokee.

Most of the Indian groups met by early European explorers were practicing economic and settlement patterns of the Woodland culture. They grew crops of maize, tobacco, beans, and squash, spent considerable time hunting and fishing, and lived in small villages. In 1550, before the arrival of the first permanent European settlers, more than one hundred thousand Native Americans were living in present-day North Carolina. By 1800 that number had fallen to about twenty thousand.

What happened to the Native Americans? Unlike Europeans, Native Americans had no resistance, or immunity, to diseases that the Europeans brought with them. These diseases, such as smallpox, measles, and influenza, killed thousands of natives throughout the state.

Settlement by European Americans also pushed many Native Americans off their land. Some made treaties with the Whites, giving up land and moving farther west. Others fought back in battle but lost and were forced to give up their lands. These battles, as well as war with other Native American tribes, also killed many.

The fates of the three largest Native American tribes—the Tuscarora, the Catawba, and the Cherokee—are examples of the fates of the other tribes in North Carolina.

In the Coastal Plain Region, most of the smaller Algonquian-speaking tribes moved westward in the face of growing numbers of white settlers. But the Iroquoian-speaking Tuscarora stayed, living in villages along the Pamlico and Neuse Rivers.

The settlement of New Bern in 1710 took up even more of the Tuscarora land and may have provoked the Tuscarora Indian War (1711–1714). In 1711 the Tuscarora attacked White settlements along the Neuse and Pamlico Rivers. They were defeated in 1712 by an army led by Colonel John Barnwell of South Carolina. Later in 1712 the Tuscarora agreed to a peace treaty. According to terms in that treaty they were to move out of the area between the Neuse and Cape Fear Rivers.

After this peace, the North Carolina Assembly refused to reward Barnwell and his South Carolina troops. The Assembly felt the army had not completely destroyed the Tuscarora’s power. As a result, while returning to South Carolina, Barnwell’s troops killed some Tuscarora, captured about two hundred Tuscarora women and children, and sold them into slavery for the money. The Tuscarora retaliated by attacking more towns. The Tuscarora were defeated in a 1713 battle at Fort Noherooka (in present-day Greene County). Up to one thousand four hundred Tuscarora had been killed in the war. Another one thousand had been captured and sold into slavery. Many of the surviving Tuscarora left North Carolina and settled in New York and Canada.

In the Piedmont Region, the Siouan-speaking Catawba Indians were friendly to the settlers. But disease, especially smallpox, killed many. War with neighboring tribes also reduced their number. Of the five thousand Catawba estimated to have been living in the Carolinas in the early 1600s, fewer than three hundred remained in 1784.

In the Mountain Region lived the Cherokee. At the start of the French and Indian War (1754–1763), they joined the British and the colonists in fighting the French. But when some Cherokee were killed by Virginia settlers, the Cherokee began attacking White settlements along the Yadkin and Catawba Rivers. They were defeated and made peace in 1761.

In return for this peace, the British promised that no White settlements would be allowed west of the Appalachian Mountains. But land-hungry Whites ignored this promise and continued to settle on Cherokee land. 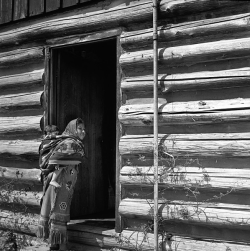 During the American Revolution (1775–1783), the Cherokee sided with the British. They thought that if the British won, the British government would protect their land from further settlement. They also hoped to gain back some of the lands they had lost to the Whites. During the war, Cherokee and Creek Indians attacked White settlements. Colonists sent troops that defeated the Indians. In a 1777 treaty, the Cherokee gave up all lands east of the Blue Ridge Mountains.

Conflicts continued into the 1790s. A 1792 treaty created a boundary between Cherokee and White settlers. The United States government promised to protect the Cherokee land from further settlement. But as White settlement continued, the federal government began thinking about removing the Cherokee and other Native Americans living east of the Mississippi River. In 1838 President Martin Van Buren acted on a policy established earlier by Andrew Jackson and sent federal troops to forcibly remove the Cherokee to the newly established Indian Territory in present-day Oklahoma. About twenty thousand Cherokee were forced to leave. The path they took has been called the Trail of Tears because so many died on this journey west.