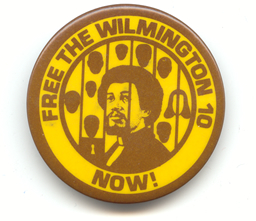 In early February, 1971, downtown Wilmington, N.C. was a war zone. Shots rang through the streets, traffic was blocked, and citizens were barricaded in a church. Although it took only a couple of days to restore peace and order, the actions of those few days and nights would bring worldwide attention to North Carolina, and would resonate for decades to come.


In the late 1960s and early 1970s, African Americans in North Carolina were frustrated by the slow pace of school desegregation and other reforms promised by federal legislation and court decisions. Many young people, rejecting the commitment of the Civil Rights pioneers of the 1950s to non-violent tactics, looked for new ways to make themselves heard. There were prominent cases of arson against white-owned businesses in Charlotte and in Oxford, N.C., and many North Carolina cities erupted in violence after the assassination of Martin Luther King, Jr. in 1968.


The largest demonstration following the assassination of King took place in the historic port city of Wilmington. Race relations there had worsened following the desegregation of the city's high schools at the beginning of the 1969/70 school year. There were frequent clashes between white and African American students resulting in a number of arrests and expulsions. The hostilities reached a boiling point in late January 1971 when Wilmington's African American students announced a boycott of the city's schools. Ben Chavis, an experienced activist from Oxford, N.C., was called to Wilmington to organize the boycott.


Shortly after Chavis's arrival, two downtown businesses were burned, and there was evidence of other arson attempts. African American activists were blamed for the incidents. Members of the Ku Klux Klan and a group called The Rights of White People began to patrol downtown Wilmington armed and openly hostile to the boycotting students and their leaders. On the night of February 6, 1971, several fires were set, and a small downtown grocery store was firebombed. When firemen reported to the scene, they were shot at by snipers on the roof of the Gregory Congregational Church, in which Chavis and a number of students were barricaded. Two people were killed and several were injured during the battle that raged that night and into the next day. Finally, on February 8, National Guardsmen forced their way into the church only to find it empty.


Based on the testimony of two African American men who claimed to have been in the church the night of February 6, ten people - nine African American men and one white woman - were arrested, tried, and convicted on charges of arson and conspiracy to fire upon firemen and police officers. The "Wilmington Ten" were sentenced to a combined 282 years in prison.


In the years following the violence in Wilmington, the case became known around the world. The Wilmington Ten were perceived to be political prisoners by individuals and groups who believed that they were prosecuted not for the actions of February 6, 1971 - and about which there were still conflicting reports - but for their beliefs. Amnesty International took up the case of the Wilmington Ten in 1976, causing an embarrassment for both the North Carolina and federal governments. As the administration of President Jimmy Carter accused the Soviet Union of human rights abuses, it was especially sensitive to charges of mistreatment of American citizens.


The case did not go away. In early 1977, the CBS news program 60 Minutes ran a feature on the Wilmington Ten, suggesting that the evidence against them had been fabricated. After higher courts refused to dismiss the charges, Governor Jim Hunt was under great pressure to pardon the prisoners. In January 1978, in an address broadcast throughout the state, Hunt refused to release the Wilmington Ten, but did reduce their sentences. In 1980 the U.S. Fourth Circuit Court of Appeals threw out the convictions, citing prosecutorial misconduct and denials of due process.

Although the Wilmington Ten were freed from prison, the charges against them remained for another three decades. On December 31, 2012 North Carolina governor Beverly Perdue issued a full pardon for each member of the the group. The action meant that the state no longer believed that any of the 10 committed a crime.


In explaining her pardon, Perdue pointed to the recent discovery of notes suggesting the prosecutor's efforts to select a jury based on race. She wrote, "These notes show with disturbing clarity the dominant role that racism played in jury selection. The notes reveal that certain white jurors believed to be Ku Klux Klan members were described by the prosecutor as 'good' and that at least one African American juror was noted to be an 'Uncle Tom type.'"


At the time of the pardon, four members of the Wilmington 10 had already died and several were in ill health.