Hunting in North Carolina is a popular and economically significant recreational activity as well as an important focus of the state's governmental agencies in charge of wildlife preservation and control. There are between 300,000 and 400,000 licensed hunters in North Carolina at any one time, generating more than $400 million of sales revenues and taxes in the state each year. It is estimated that outdoor sports activities such as hunting and fishing create 35,000 jobs in the state. A large number of programs and workshops are offered by the North Carolina Wildlife Resources Commission to educate both novice and experienced hunters. While hunting is an activity often shared between generations and connected to both cultural tradition and respect for the state's wildlife populations, it may also be seen as a statistically dangerous sport. Between 1990 and 2004, 61 people were killed and 479 injured as a result of hunting-related accidents. 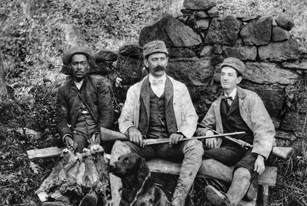 North Carolina's first European settlers brought their hunting experience with them, including, for the upper classes, a love of fox hunting with hounds. The Native Americans whom the settlers encountered were likewise hunters. At that time, the land was rich in buffalo, elk, deer, bear, rabbit, squirrel, beaver, raccoon, opossum, wild turkey, partridge, and pigeons. In time, with more hunters seeking food or recreation or both, game laws were introduced in the colonial period and were continued by the state following the American Revolution. Until 1903, however, there was no statewide governmental organization to protect wildlife. In that year the General Assembly provided partial state funding to the Audubon Society of North Carolina, which also received "state-like" authority to enforce laws and protect wild birds and animals.

The Audubon Society had only limited success, and in 1927 the legislature ended the arrangement with this private organization and transferred its functions to the office of game warden and to the new State Game Commission. Eventually the powers and duties of this commission, along with the office of game warden, came under the control of the Department of Conservation and Development. That department, created in 1925 to replace the State Geological and Economic Survey (which in this act was abolished), and its Board of Conservation and Development, had been established to consolidate all agencies involved in the conservation and development of the state's resources. 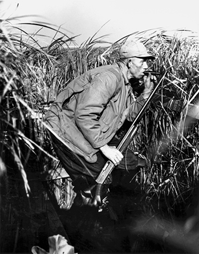 In 1947 the General Assembly established the North Carolina Wildlife Resources Commission as a separate, semiautonomous agency to manage, protect, regulate, and restore the state's wildlife resources and to administer all applicable laws. The commission absorbed the corresponding functions of all agencies that had previously dealt with wildlife conservation and restoration. In 1997 the Wildlife Resources Commission became a part of the Department of Environment and Natural Resources. It is responsible for the sale of hunting and fishing licenses to residents and nonresidents, setting and implementing qualifications for its agents, promoting boating safety, and the preservation of endangered species in consonance with the federal Endangered Species Act of 1973 as amended. The commission also conducts an extensive environmental education program for school-age children. Its official publication, Wildlife in North Carolina, begun in 1937, is dedicated "to the sound conservation of North Carolina's wildlife and other interrelated natural resources and also to the environment we share with them." Each year its September issue includes "North Carolina Hunting Season," a summary of the dates of the hunting season and daily and season limits for each species (dove, deer, black bear, and so forth).

Most of the over 1.8 million acres of public hunting grounds in North Carolina is available for hunting during open seasons by those with Game Lands Use Licenses. Special additional permits may also be required due to quotas in areas with a history of heavy use, for specific hunting methods such as trapping, or because of careful game management, particularly with turkey, waterfowl, deer, and small game. For example, 5,000 permits are granted annually for hunting of the tundra swan (North Carolina has the largest winter swan population on the East Coast). Although squirrels, rabbits, doves, and waterfowl are very popular game animals in the state, deer are by far the most hunted. Other large game animals frequently hunted include wild boar and black bear, whose numbers are higher in North Carolina than in any other southeastern state.

Various hunting seasons extend throughout much of the year, though hunting is not permitted on Sundays except on certain federal military installations. Bear season generally runs from mid-October through late November or the end of December, with certain counties and regions having variations in the dates. Boar season runs for about a month during October and November and likewise closes out the month of December. Wild turkey may be provisionally hunted for about a month between April and May, select counties allowing a few days of hunting around January. Deer season varies based on location and type of hunting (bow and arrow, muzzle-loading weapon, or gun), but any hunting of the species generally begins in mid-September and typically ends by the end of December.

The man in the middle of the