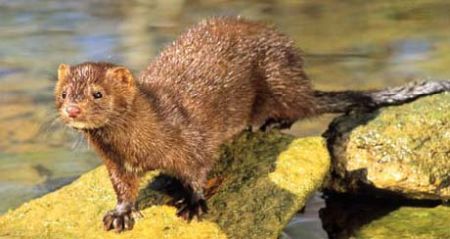 Mink from coastal areas are generally smaller than those found in the mountains and Piedmont. 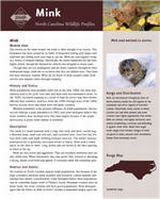 The breeding season occurs from late January through February. Females rear their first litter at one year of age.

Mink are one of over 100 mammal species in which the fertilized egg is not implanted in the womb for some time. In mink, this period of delayed implantation lasts 10-40 days and is followed by an active pregnancy of 28-30 days. One litter of 4-5 blind and hairless kits is produced each year. Offspring are sexually mature when one year old, and females produce litters after their first breeding season. 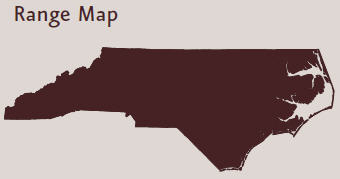 Mink are distributed throughout most of North America except for arid regions of the Southwest and arctic regions of northern Canada. Historically, every county in North Carolina has had mink present and some counties have higher populations than others. Mink are solitary and highly territorial, each animal establishing a territory and defending it against other mink. Males have larger home ranges than females. Ranges of mink are given in miles, because their movements follow linear waterway routes.

Also known as the water weasel, the mink is often thought of as vicious. This reputation has been earned by its habit of frequently killing prey larger than itself and also killing more prey than it can eat. Mink are semi-aquatic living in a variety of wetland habitats. Historically, the mink’s handsome fur has been highly prized, though the demand for wild fur has dropped in recent years.

Though they are not endangered and are fairly common throughout their widespread range, mink are so secretive that they are seldom seen. They have not been intensely studied. What we do know of them usually comes from surveys and samples taken through trapping.

Mink populations were probably fairly low in the early 1900s, but their populations tend to be cyclic over time and little early documentation exists. In the 1920s, increased trapping as a result of high fur prices may have further affected their numbers; however, from the 1940s through most of the 1960s, harvest records show that mink were still fairly common. 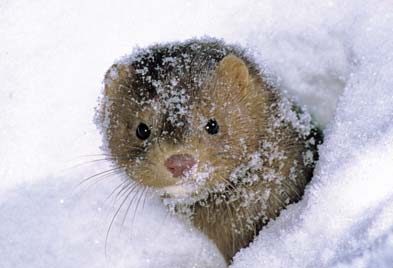 Wetland availability is the primary influence on mink populations. Harvest records indicate a peak population in 1962, and some biologists believe that mink numbers have declined since that time largely because of the steady destruction of prime mink habitat in wetlands.

The mink is a small mammal with a long, thin body and short, sturdy legs, a flattened head, small eyes and ears, and a pointed nose. Each foot has five toes with claws and slight webbing between each toe. The mink’s lustrous waterproof fur is generally chocolate brown to black, often with a white patch on the chin or chest. Long, furred tails are brown at the base tapering to black at the tip.

All counties in North Carolina support mink populations, but because of the high correlation between mink numbers and wetlands, coastal marshes and swamps have denser concentrations. Some biologists believe these populations may be somewhat higher north of Pamlico Sound. Mountain counties have far fewer mink, but some counties still have good populations. Most biologists agree that the future of mink in North Carolina is dependent largely upon the availability of wetlands. As wetlands decrease so do mink populations. However, the mink’s reproductive potential and general food habits tend to provide buffers against most other disturbances, including trapping.

Prime locations in wetlands for mink include areas with irregular shorelines, dense emergent vegetation, availability of den sites and a variety of suitable food. Although mink will den just about anywhere, they prefer burrows made by other animals, usually muskrats or beavers. They may also choose dens in brush piles, log jams or cavities in the roots or trees. Mink move frequently and adopt temporary dens except when they are rearing young.

Because mink are primarily nocturnal, few people have had the chance to see one in the wild. This is not to say that they do not live near humans, but that their secretive nature allows them to go unnoticed. Regulated trapping has little effect on mink populations. A much greater threat is habitat degradation generally in the form of wetland development. In addition to loss of habitat, development often brings pollution, and mink are known to concentrate pollutants in their systems. Aside from humans, mink have few natural enemies, although they experience some mortality from domestic dogs, bobcats, foxes and owls.

Most important to the future of the mink in North Carolina is the conservation of wetlands. Their future is only as promising as that of the wetlands.

Due to declines in the harvest of minks in the southeastern United States, biologists from North Carolina, South Carolina, and Georgia participated in a tri-state research project to determine if certain environmental contaminants may be impacting mink populations. As a predator, mink are near the top of the aquatic food chain, making them susceptible to contamination in the food chain, due to the biomagnification of toxicants. North Carolina licensed trappers and fur dealers provided mink to NC Wildlife Resource Commission biologists for lab analysis. Researchers found various organochlorine insecticides and PCBs in all mink. However, researchers were unable to conclusively state whether these contaminants were associated with mink population declines due to low sample size and the fact that mink from healthy populations also contained contaminants at similar levels. Elevated mercury concentrations were found in all mink kidneys from all three states; it has been suggested that mercury can cause sublethal effects on many physiological functions, such as reproduction, growth and behavior. As with the other contaminants, this study was unable to determine if mercury was impacting mink physiology or mink populations. Biologists acknowledged that other factors may effect mink populations, such habitat loss due to increasing development along eastern shorelines, which alter both mink activity and prey abundance. Further studies were recommended to investigate if there is a link between presence of environmental contaminants in mink and mink populations.

To see minks in action, go to: https://www.youtube.com/watch?v=YRHu5W7RY9g