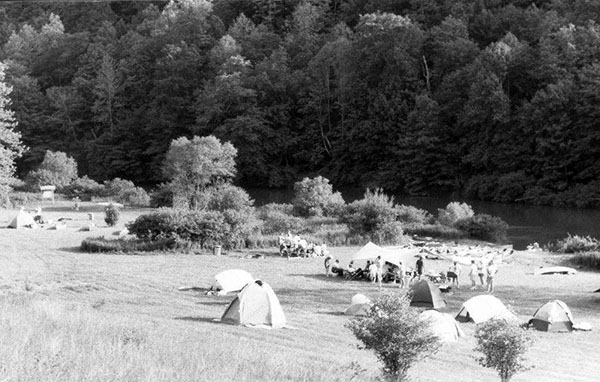 The northwestern corner of North Carolina the north and south forks of the New River flow north from headwaters in the Blue Ridge Mountains. Winding more than 100 miles through forested mountains and pastoral valleys, the forks join just a few miles south of the North Carolina-Virginia line. The New River continues its unusual northward flow through southwestern Virginia and West Virginia into the Kanawha and Ohio rivers, its waters eventually reaching the Gulf of Mexico by way of the Mississippi River.

The New River is believed to be one of the oldest rivers in North America. It existed before the mountains through which it now passes and, for millions of years, its waters have followed essentially the same course. Many stretches of the river flow through remote countryside not easily accessible by road or trail. The designated scenic segment of the river, 26.5 miles in length, includes 22 miles of the South Fork downstream to its confluence with the North Fork and 4.5 miles of the main stem of the river north to the Virginia line.

Archaeological investigations in the New River valley suggest the presence of humans in the region for at least 10,000 years. Artifacts such as arrowheads, pottery shards and stone axes indicate that the Canawhay Indian tribe occupied the valley during the pre-colonial period. The valley also was a hunting ground for bands of Creek, Shawnee and Cherokee Indians. Their hunting trails led north along the New River to the Ohio River. Rock shelters near the confluence of the river's forks were used by hunters who camped in the bottomlands. The river was a major route of travel for transient hunters, but there were no known permanent settlements in the area, perhaps due to more aggressive northern tribes nearby.

The earliest Europeans to enter the area encountered a land of wild beauty with dense forests, open meadows and an abundance of wildlife including bison, elk, black bear and beaver. The first European to see the river was probably Colonel Abraham Wood, who sought trade with the Native Americans in 1654. Hence, the river became known as Wood's River.

Other non-indigenous visitors to the region before the 1770s were hunters and trappers, men such as Daniel Boone who settled along the Yadkin River near present-day Wilkesboro. The New River was given its current name by Peter Jefferson, the father of Thomas Jefferson, who visited the area in 1749 when he surveyed the North Carolina-Virginia boundary through New River country. 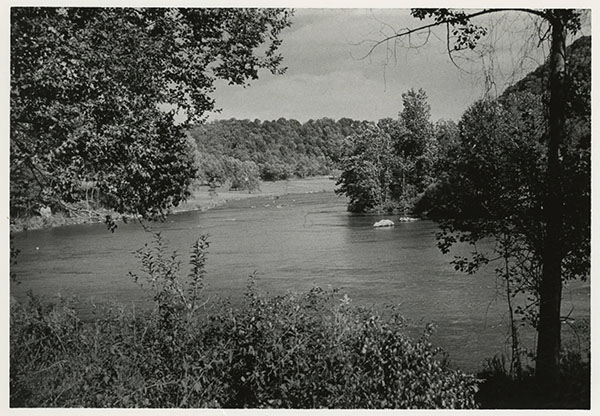 Efforts to preserve the scenic qualities of the New River and to keep it free from human alteration began in 1965 when the Appalachian Power Company applied for a license to dam the river and build reservoirs for water storage. Over time, opposition to the proposal arose from citizen groups, and state and federal agencies. Hearings, litigation and legislative action followed.

In order to protect this historic river and the scenic area surrounding it, the North Carolina General Assembly, on May 26, 1975, declared the 26.5-mile stretch of the river from its confluence with Dog Creek to the Virginia state line a State Scenic River. In April, 1976, the Secretary of the Interior designated the same portion of the river as a part of the National Wild and Scenic River System. This action was reaffirmed by an act of Congress, and construction of the dam and reservoirs was prohibited.

Dense forests once blanketed the land in the New River valley, but most of the virgin forest was cut or cleared and the woodlands now consist of second- or third-growth trees. Nevertheless, an abundance of forest cover grows primarily on ridges and on the steep slopes of the valley wall.

The soil is fertile and much of it is moist, supporting many species of hardwoods, pines, shrubs and wildflowers. More than half of the forest cover is an oak/hickory hardwood community. Oaks, hickories, maples and pines grow where the soil is relatively shallow and dry. The moist soil along the river's tributary streams supports a more diverse flora including American beech, black gum, yellow poplar, black locust and yellow birch. Hemlocks and pines grow at higher elevations. The understory includes dogwood, sourwood, sassafras, huckleberries, alders and hydrangeas. Mountain laurel and rhododendron grow on north-facing slopes and add color to the woodlands in winter and beautiful flowers in the spring.

At least 14 species of rare, threatened or endangered plants grow in the valley. They include rattlesnake root, Carolina saxifrage, Carey's saxifrage, spreading avens and purple sedge. Please help preserve our diverse natural heritage by leaving these valuable species in their natural habitats for all to enjoy.

Diverse animal species make their homes in the New River Valley. White-tailed deer are common and black bears are seen occasionally. Mink, muskrat, river otter and raccoon may be encountered along the river. Beaver have been reintroduced to the area.

Bird life is abundant and varied, and the valley is home to several nesting birds uncommon in other parts of the state. A population of wild turkeys is present in lowland forests and ruffed grouse may be seen at higher elevations. Sightings of ospreys along the river have increased in recent years. Red-tailed hawks nest on cliffs above the river. Scarlet tanagers, American goldfinches and indigo buntings provide brilliant flashes of color, and serious bird watchers look for uncommon species including black-billed cuckoo, willow and least flycatchers, warbling vireo, golden-winged warbler, and northern oriole. Spotted sandpipers, belted kingfishers and wood ducks are also encountered along the waterways.

Wet summer evenings bring choruses of frogs, common in the wetlands adjacent to the river and its streams. Salamanders thrive in shallow, rocky tributaries while nonvenomous water snakes can be seen along the river's edge. A variety of lizards and turtles occupy the region.