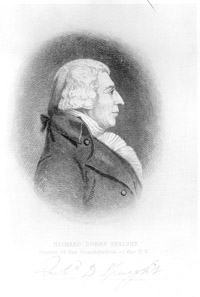 Richard Dobbs Spaight (1758-1802), a signer of the United States Constitution and the first native-born governor, was the father of Richard Dobbs Spaight Jr., who served as governor, 1835-1836. Of Irish extraction, the elder Spaight was born in New Bern on March 25, 1758, to Richard and Elizabeth Wilson Spaight, and was distantly related to Governor Arthur Dobbs. Orphaned as a boy of nine, Spaight received his preparatory education in Ireland and is thought to have graduated from the University of Glasgow. His wife was the former Mary Jones of New Bern, whom he married in 1788.

Returning to North Carolina during the early stages of the Revolution, Spaight served as a military aide to Governor Richard Caswell. Early on, however, his energies and ambitions were directed primarily toward politics rather than warfare. From 1779 through 1783 and the winning of independence, Spaight represented New Bern in the state House of Commons. Following two years as a delegate to the Continental Congress (1783 to 1785), he returned to the House of Commons from 1785 to 1787 and in 1792. In 1785 he served as speaker of the House. Following his governorship, he served in the state Senate in 1801 and 1802.

As a prominent Federalist leader, Spaight was one of five delegates from North Carolina to the Constitutional Convention in Philadelphia in 1787. Following an active role in the Convention, he signed the Constitution; and in 1788 he argued forcefully but unsuccessfully for its ratification at the state Constitutional Convention in Hillsborough. Never a robust man, Spaight’s poor health forced him from public life from 1788 to 1792, when he was returned to the state House for a final term. On December 11 of that year he was elected governor by his fellow assemblymen after four days of balloting. Twice reelected, he served the maximum three consecutive terms.

Spaight was the first governor to convene the General Assembly in Raleigh. Much of his role as chief executive was played against the backdrop of war between England and France. Although he supported President George Washington’s proclamation of neutrality, strong Republican support for France existed in the state’s seaports, especially in Wilmington. In 1794 Spaight’s appeal to the General Assembly resulted in the mobilization of the state’s militia forces and the strengthening of coastal fortifications. Other issues during Spaight’s administration included the ongoing settlement of financial accounts with the federal government, the negotiation of lingering border disputes with South Carolina, and the threat of Cherokee uprisings in the mountain region. In 1795 he presided over the official opening of the University of North Carolina.

Post-term, Spaight returned to New Bern and the life of a wealthy planter, but in 1798 he was elected to the United States House of Representatives. There he remained until 1801 and his election to the state Senate. For several years following ratification of the federal Constitution, Spaight had found himself increasingly inclined toward Jeffersonian Republicanism. His final conversion to that political philosophy stemmed largely from his opposition to the Alien and Sedition Acts. In 1802 he became embroiled in a bitter personal rivalry with the ardent Federalist and fellow New Bernian, John Stanly. On September 5th of that year the two men fought a duel in which Spaight was seriously wounded. He died on the following day, in the forty-fifth year of his age, and was buried in the family cemetery at Cleremont plantation.