Part 2: Development and Growth of the North Carolina Tobacco Industry 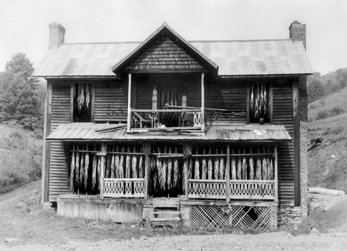 Tobacco usage for ritualistic and medicinal purposes has been traced backed by archaeologists to about 800 B.C., and in many modern cultures, including that of some Native Americans, tobacco still has a ceremonial function. In 1492 Christopher Columbus noted the use of tobacco by American Indians. In Jamestown, Va., John Rolfe, more widely recognized as the husband of Pocahontas, first industrialized tobacco in 1612. After four failed efforts by others to establish a permanent colony on North American soil, Rolfe introduced a milder and sweeter tobacco variety. His "scientific" expertise in 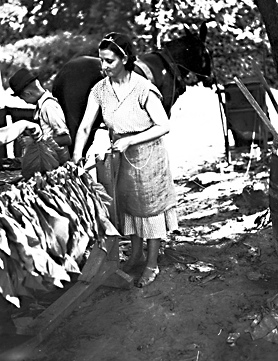 cultivation and curing, along with commercial ingenuity and foresight, parlayed tobacco into a staple trade item with England. It became the basic economic force that brought permanence and success to the country's social beginnings, while also directly creating a plantation economy based on slave labor.

In the late sixteenth century, Sir Walter Raleigh's Roanoke colonists in the region that became North Carolina found that the Native Americans raised tobacco-the Indian's "holy herb"-and that it was smoked by all ages and both genders in clay pipes and also used as snuff. The settlers began to grow Indian crops, and in time tobacco became Carolina's leading "money crop" or export to the British Isles and Europe. It was grown in the Albemarle Sound area, in the Roanoke River Valley, and later in Granville County and other counties bordering Virginia.

Tobacco production was encouraged by agricultural legislation passed by nearly every Assembly, the vast majority of whose members were engaged in agriculture or related industries-as were perhaps 95 percent of the colonists. This was a natural development resulting from the abundance, fertility, and inexpensiveness of land, as well as the imperative need of the people for self-sufficiency. However, in North Carolina, as elsewhere in colonial America, agricultural practices were generally backward and unscientific. Land was tilled year after year until the soil was exhausted, then new ground was cleared and cultivated. There was little or no crop rotation, barnyard manures were not used, commercial fertilizers were unknown, and there was a scarcity of tools and implements. In addition, tobacco growing, primarily in the Coastal Plain but also in the Piedmont, required a great deal of labor, leading to the growth of the slave population in the colony.

Tobacco production in North Carolina continued to increase throughout the eighteenth and nineteenth centuries. By 1850 the state was producing approximately 12 million pounds a year, and by 1860 that figure had skyrocketed to 33 million pounds. Part of this increase came as a result of the discovery of a new type of tobacco leaf and a new curing process. In about 1852 Abisha and Elisha Slade of Caswell County perfected the production of bright yellow tobacco using charcoal instead of wood as the fuel for curing tobacco grown on a bright, sandy, and relatively infertile soil. The new flue-curing process had been accidentally discovered in 1839 by a young slave named Stephen (who later became known as Stephen Slade). Stephen fell asleep while watching a barn of curing leaf tobacco. When he awoke, he rushed to his nearby charcoal pit, seized several charred butts of logs, and placed them on the dying embers. The result was 600 pounds "of the brightest yellow tobacco ever seen." At first it was thought that this curing process was the secret of producing bright leaf tobacco, but later it was found that the soil was the principal factor.