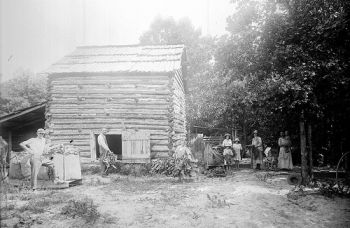 Tobacco manufacturing was developed largely by men who had experience in growing and selling tobacco or who had lived on farms where tobacco was raised. There were many small tobacco factories in counties along the Virginia border-especially Granville, Person, Caswell, Rockingham, and Stokes-as well as Burke, Iredell, Orange, Rowan, and other counties before 1840. But it took the visits of Confederate and Union armies to the Piedmont, particularly to Durham, to popularize these products. During the Civil War, especially in 1865 when Union general William T. Sherman's troops invaded the state, soldiers discovered the quality of bright leaf smoking tobacco. The idle troops-pending arrangement of terms between Sherman and Confederate general Joseph E. Johnston at Bennett Place-looted John R. Green's tobacco factory at Durham. They found Bull Durham Smoking Tobacco to be the mildest and best they had ever tried.

After the war, the soldiers began writing back to Durham for more bright leaf products. The tobacco industry shed its local character and began its rise to national importance. The Dukes-Washington and sons Benjamin N., James B. "Buck", and Brodie L.-were among the first to take advantage of this new demand. Washington Duke, mustered out of the Confederate army, returned to his farm near Durham, where he found that some tobacco had been overlooked by the marauding soldiers. He began grinding tobacco, which he packed and sold under the brand name Pro Bono Publico to soldiers and the public. By 1874 Duke and his sons were manufacturing smoking tobacco. That year R. J. Reynolds also built his first factory in Winston. James B. Duke decided to start making cigarettes, which by 1880 (following their first commercial production, being rolled by hand, in New York about 1864) had become economically important. Although crude cigarette-making machines had been invented in the United States in the 1870s, a more practical device with which to roll cigarettes was invented by James A. Bonsack, a Virginian. That machine-capable of turning out 120,000 cigarettes a day, the equivalent of 40 steady hand rollers working 10 hours-was set up in the W. Duke, Sons and Company factory in 1884. The Duke firm thus gained a great commercial advantage over competitors.

By the turn of the twentieth century, North Carolina was internationally recognized as America's leading source of tobacco. Even though it was widely known as "Virginia bright leaf," European customers still understood the North Carolina origins and looked to the state as the world's major supplier. Cigarettes were fast replacing cigars and chewing tobacco as the most popular means of tobacco consumption in the United States. Interested in forming a combination of the larger cigarette manufacturers, James B. Duke played a key role in organizing the American Tobacco Company, of which he became president, in 1890. In the following years, American Tobacco and its various offshoots gained control of the market not only for cigarettes but also for smoking tobacco, snuff, and practically all tobacco products except cigars. The federal government's antitrust action against this corporate giant was launched in 1907 and ended in 1911, when the Supreme Court ordered its dissolution. The old American Tobacco and its closely related subsidiaries were divided into a new American Tobacco Company, Liggett-Myers, P. Lorillard, Philip Morris, Brown and Williamson, and R. J. Reynolds. James B. Duke soon disassociated himself from the tobacco industry and joined brother Benjamin and George W. Watts in the development of hydroelectric power. 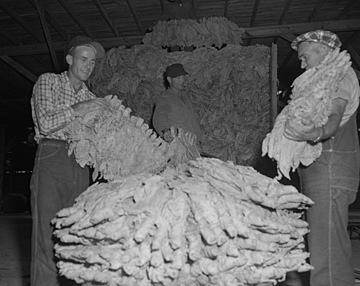 While North Carolina-based tobacco companies came to dominate the industry, the arduous work associated with tobacco cultivation continued to control the lives of thousands of North Carolinians and influence much of the state's rural culture. Tobacco farms and barns were common and easily recognizable features of the North Carolina landscape. Tobacco farming demanded constant attention during all its phases, from planting, tending, and harvesting the crops by hand to curing and transporting the product to market. Successful farming was a year-round process requiring experienced laborers, often working long hours under grueling conditions. From the demise of the plantations following the Civil War through much of the twentieth century, entire families and, in many cases, whole communities lived, worked, and participated in celebrations and diversions fitted to the seasonal requirements of tobacco farming.

During the Great Depression, when crop prices fell drastically, farmers in North Carolina and other agricultural states suffered tremendous hardships. In an effort to improve their situation, Congress passed various bills affecting crop production and prices, the most significant and far-reaching of which was the Agricultural Adjustment Act of 1938. This act established a system of production quotas for several key crops, including tobacco. These quotas-differing in size and calculated from a formula using past production figures of individual tobacco farms-put limits on the amount of tobacco that each producer could sell in the market, thus guaranteeing higher leaf prices. Over the decades, individual producers sold their quotas to larger landowners, who consequently gained increased production rights and a greater share in the market. Quotas were often rented, as well, further strengthening the economic position of the larger farms. The quota system, with its consistently strong price supports, continued to control tobacco production throughout the remainder of the twentieth century. Under this system, North Carolina's tobacco growers became the most productive in the nation. The mid-twentieth century represented a high-water mark for the industry. Growers produced nearly 1 billion pounds of leaf in 1955, the largest amount ever produced in the state.

Meanwhile, Durham (home of American Tobacco and Liggett-Myers), Winston-Salem (R. J. Reynolds and Brown and Williamson), Reidsville (American Tobacco), and Greensboro (Brown and Williamson) were considered to be among the nation's leading tobacco-manufacturing centers. (Philip Morris, the fifth of what became the "Big Five" tobacco companies, located in Concord in 1983.)

Keep reading >> Tobacco- Part 4: Legal Challenges and the Decline of the Industry