North Carolina currently has six types of public transportation systems: human service transportation, community transportation, urban transit, regional transit, vanpool and carpool programs, and intercity buses. A seventh “public” mode of conveyance includes taxis and other “for hire” personal vehicles, such as limousines. Taxi companies are regulated by business licenses granted by the communities in which they operate. Taxi service is available in most North Carolina towns and cities with more than populations of more than 25,000. The six modes of public transportation are described below.

In addition to carpool/vanpool services provided by the regional and urban transit systems, the NCDOT Central Office and various private vanpools and carpools across the state provide commuter services to employees. There are estimated to be almost 200 such informal systems in existence as of 2007.

Intercity bus services are privately owned and operated transportation systems. These systems serve many cities and towns throughout the state, with most routes concentrated in the densely populated corridor from Charlotte to Greensboro and Raleigh. Intercity bus companies currently registered and regulated by the North Carolina Utilities Commission are Greyhound Lines, Carolina Coach Company, and American Charters. These companies provide fixed route intercity and interstate bus service. In addition, major components of North Carolina’s bus/coach transportation services are provided by charter coach or tour companies, which are unregulated at the state level. With the aging of the population, and increasing demands for tourist travel by charter coach or tour companies, there is a growing demand for this type of service. Approximately 110 such private tour/coach companies, which are members of a national charter coach association, currently operate in North Carolina, although this only represents a portion of the companies providing these services. This is another transportation “growth industry” among the transportation services in North Carolina, fueled by the growing number of retired persons and others who prefer such services for tourism trips.

Since congestion in urban areas typically is most severe during morning and afternoon “peak hours,” the most widely used measurement of congestion in American cities is the average time taken on the trip to work. These data are collected in the U.S. Census Bureau’s American Community Survey and in the Decennial Population Census. In 2009, the Average Commute Time to work in North Carolina’s counties (in minutes) is shown in Figure 6. By analyzing commute times and patterns, it is possible to begin to examine the extent to which congestion has become more common in the larger urban areas. Commuting times are a function of the relative traffic density on the highway. Relative traffic density is the ratio of volume to road capacity.

Increased automobile ownership and continuation of the suburbanization of metropolitan areas have been partially responsible for changes in commuting patterns, with an increase from 1990 to 2000 in individuals driving alone to work. However, as compared to previous years (compare Figure 7 with Figure 8), the period from 2000 to 2009 saw a decline in the percentage of individuals driving to work alone, possibly because higher fuel prices caused commuters to carpool and/or use public transportation. In addition, more employers may have encouraged carpooling. In both 2000 and 2009, a larger percentage of individuals drove alone in the Piedmont and larger metro areas, which generally tend to be areas of higher income and auto ownership. 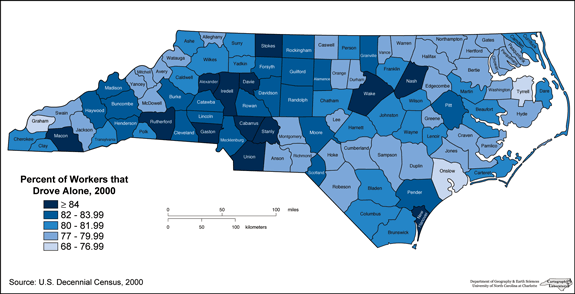 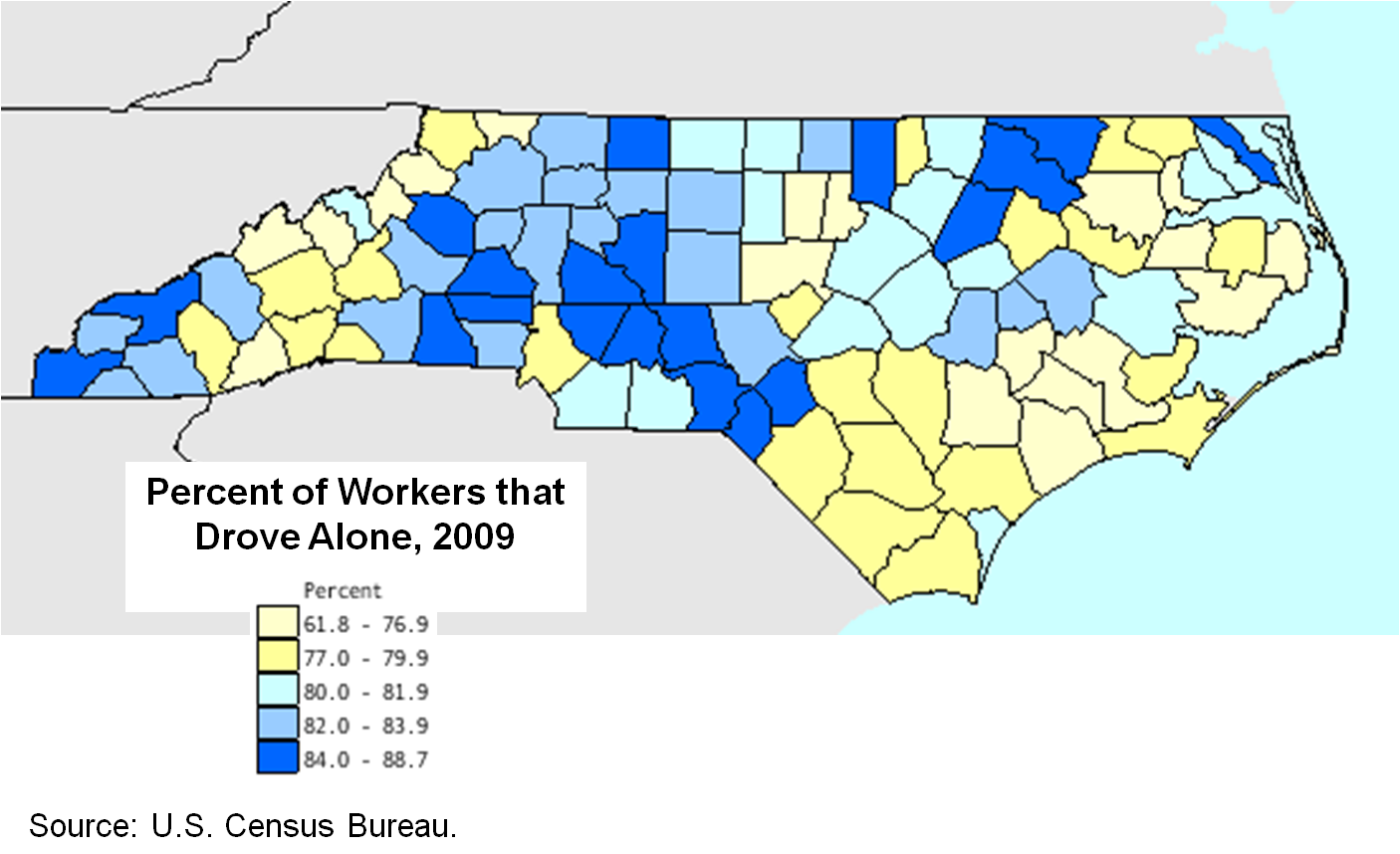 In comparison with the tendency of traveling alone to work occurring primarily in urban areas, carpooling is higher in rural, relatively isolated counties where incomes are usually lower (Figures 9 and 10). The lowest percentages of carpooling in both 2000 and 2009 were located in all of the state’s metro areas. Commuters who live farther from larger employment areas use carpools or vanpools to work, more than those who live closer to their employment. 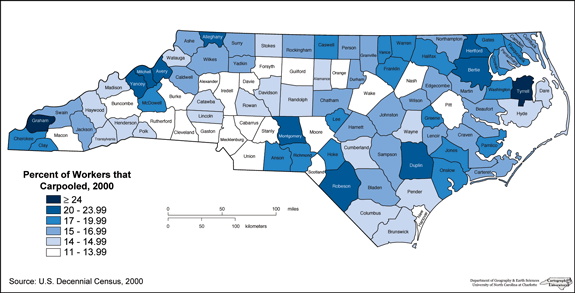 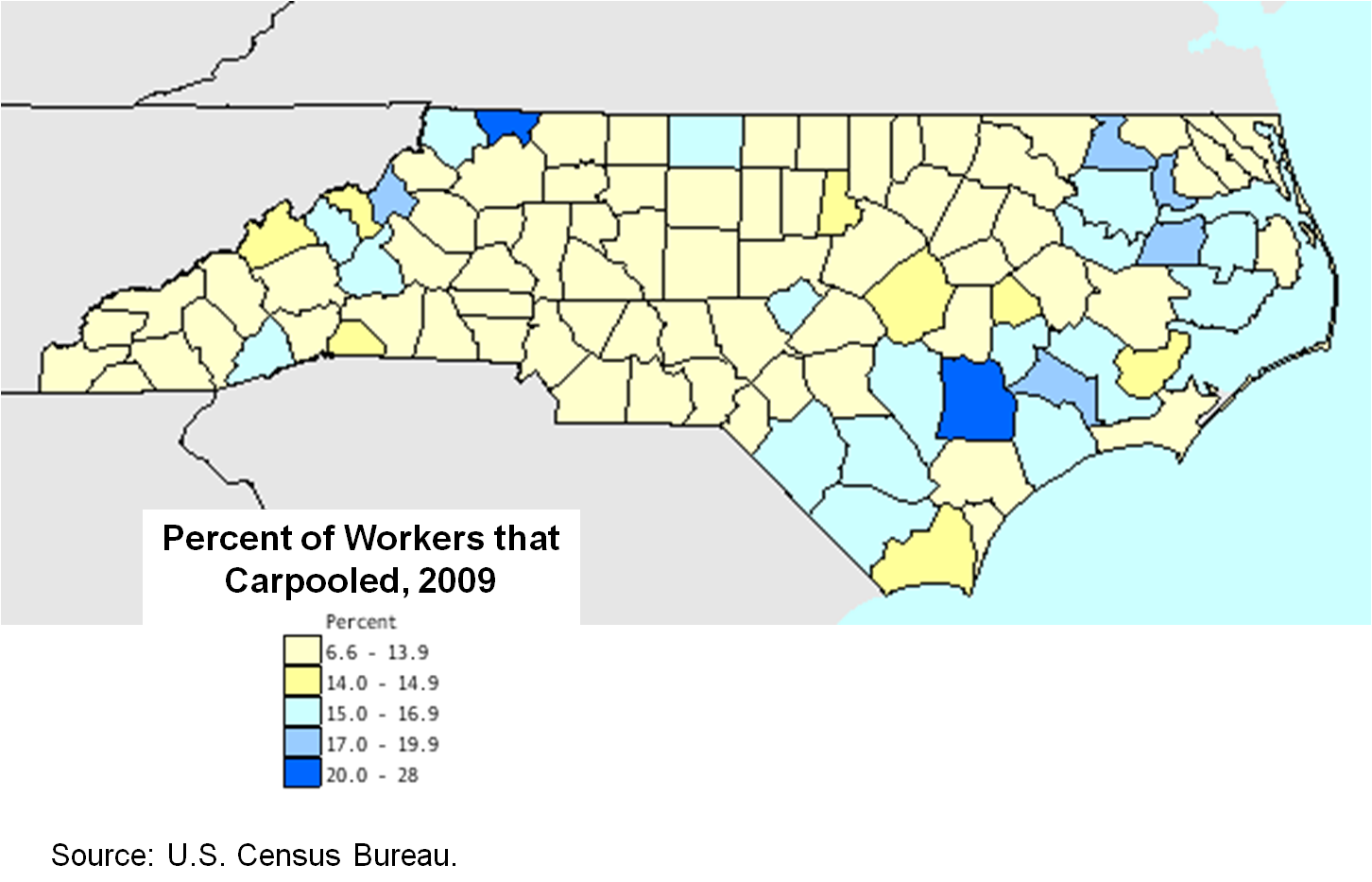 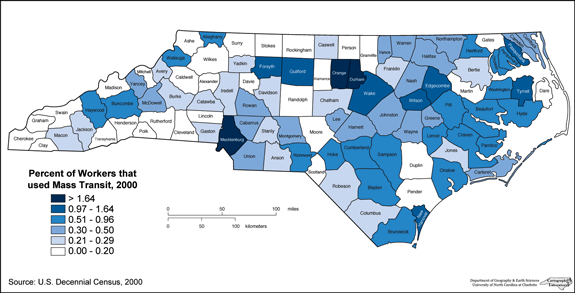 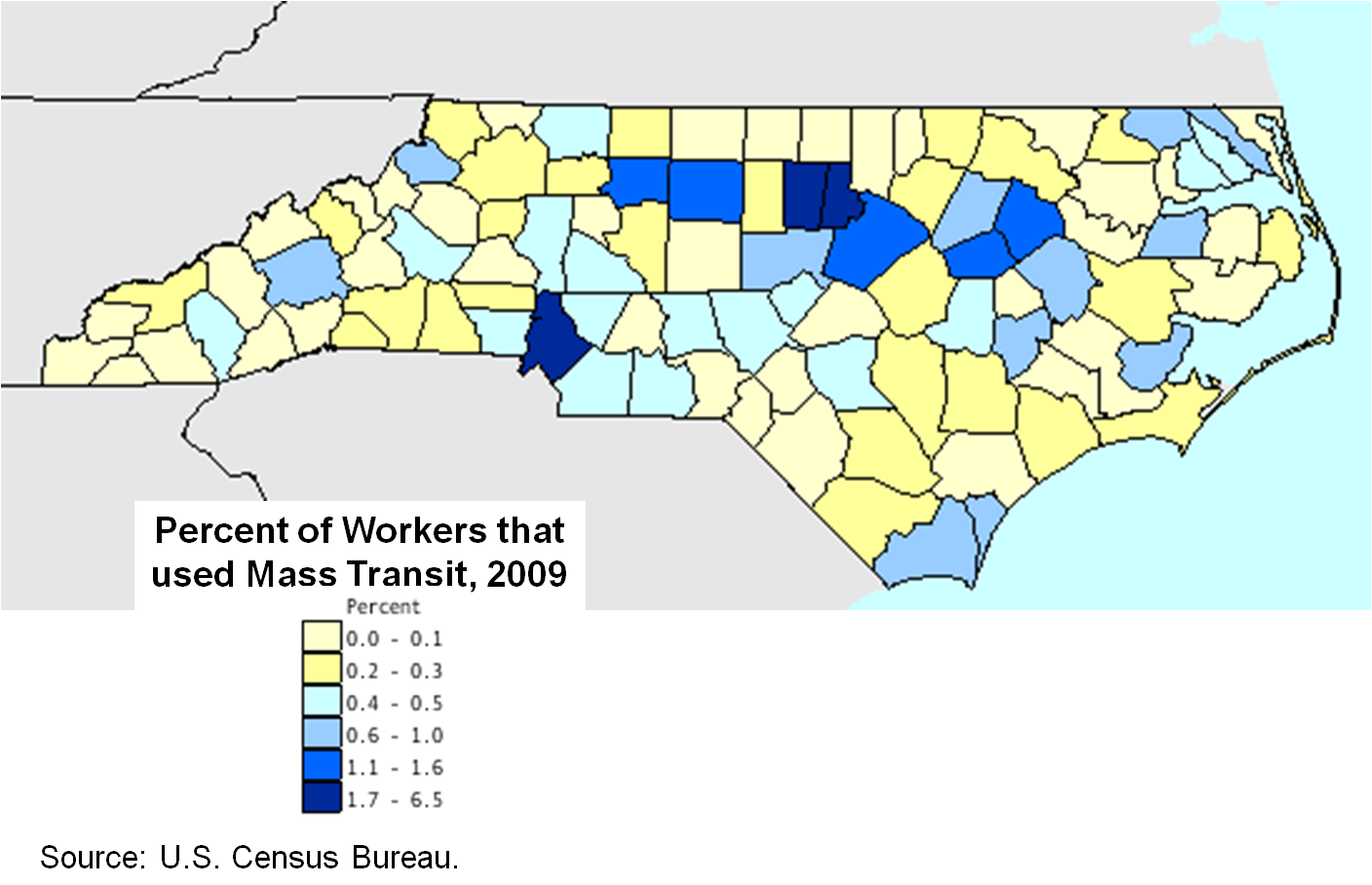 North Carolina is a major manufacturing and distribution center for the eastern U.S. It is geographically positioned to link the nation’s northeast and southeast, the historic center of population and manufacturing, and the emerging center for future growth and economic development. Latin American trade growth and shifts in routing of Asian trade are already affecting North Carolina’s freight transport system. For example, trade patterns are expected to shift when the Panama Canal expansion project is completed in 2014.

Other factors that are making an impact on freight movement, particularly truck freight, in North Carolina include:

Figure 13 shows freight flows on North Carolina’s highways for 2007, the most recent date for which such systemwide data are available. It is no surprise that the heaviest volumes of heavy truck traffic (approximately 50,000 trucks per day) took place on the Interstate corridors through the Piedmont Crescent (Raleigh to Greensboro-Winston-Salem, on to Charlotte and southwest to the South Carolina border). As regulated carriers, there are approximately 272 trucking companies in North Carolina that report to the North Carolina Utilities Commission.

I’m thinking about moving to

I’m thinking about moving to Charlotte no in 2020. I don’t drive. Where can I get information on the new rail system that they just started. I know when I visit we ride it down town.

You can find more information about the Charlotte LYNX service at their website: https://charlottenc.gov/cats/rail/Pages/default.aspx.

I hope this helps. Please feel free to respond to this post with additional questions or comments.

I need transportation to and

I need transportation to and from work in Cabarrus, NC. I will be starting a new teaching job and there is NO public transit out of Charlotte into Concord. Can you suggest a private or commercial shuttle, vanpool, carpool service that will not cost outrageous prices. Thanks

Unfortunately, we don't have any specific information in NCpedia that would help you.  Here are a few suggestions that might help.

Contact Cabarrus County government.  They may be able to suggest local resources for you.  Here is the county government link: https://www.cabarruscounty.us/government/Pages/default.aspx

Contact your local library.  They may be able to help you get access to specific local information and services.

If I fly into Charlotte - how

If I fly into Charlotte - how could I get to the beach areas? Flight there from where I am appears to be the least expensive; I don't drive long-distance on Intersates, but if the roads are good, and the traffic not too fast moving, I can drive some on roads where the traffic goes about 45 mph; what do you suggest? Is there a bus system that goes around the state? thank you

Thanks for taking the time to

Thanks for taking the time to post a question to NCpedia. It really depends on what beach you are going to. Many beaches are hours apart from one another. Charlotte is at least a four hour drive by car to Wrightsville Beach, which is one of the easiet beaches to get to from Charlotte. Nags Head, NC is about six hours from Charlotte and Ocracoke is eight and a half hours from Charlotte. The times quoted are for taking highways for the majority of the trip. There is a Greyhound Bus station in Charlotte and in Wilmington, NC. Wilmington is a few miles from Wrightsville Beach. Contacting the local chamber of commerces for those areas may help determine if there is a bus service between the two.

Greyhound is likely the bus system one would use to travel from one large town to another in North Carolina. Some municipalities have local bus service. Again, the Web site for each town's Chamber of Commerce will likely direct you to information about public transit in that area.

Another site that might help is Visit NC : http://www.visitnc.com/.

Good luck in your travel plans!