The Great War and Global Change

What were some of the key components shaping African American life in NC in the early twentieth century?

The beginning of the twentieth century is often referred to as the nadir of U.S. race relations. The nadir refers to the lowest point in a person or organization’s existence. Many historians use nadir to describe the worst period in African American history. Some identify this period as the end of the 1800s through the early 1900s. For African Americans, this was a period of intense racial violence and few opportunities for economic and educational security.

In the rural South, many African Americans were tenant farmers and sharecroppers. It was common for landowners to refuse to give African Americans an equal part of the profits earned from the crops they harvested. Individuals and families began migrating to cities for better economic opportunities. In North Carolina, this looked like African Americans relocating from rural parts of the state. Some people moved to cities like Durham to work in tobacco factories. Although there was still economic inequality there was the hope of better prospects.

However, the country and the world changed in 1914. On July 28th World War I, also known as the Great War, started. For the first two years, the United States pledged to remain neutral. In the early part of 1917, President Woodrow Wilson asked congress to declare war on Germany. He cited Germany’s military activity in the Atlantic ocean and the destruction of  U.S. ships. On April 6, 1917, the U.S. officially entered the war.

The war ended on November 11, 1918, what is now called Armistice Day. African Americans likely expected to return home to a more equal society. Some may have believed that their sacrifices in the war would guarantee more citizenship rights than before. Instead, they found increased racial tensions when they returned to the United States. African Americans remained disenfranchised and unable to take part in political processes. The African American community endured segregation and the threat of racial violence.

World War I was a significant turning point in modern global history. There was great loss of life and the war reordered global politics. For African Americans, the end of the war showed the limits of democracy in the United States. African Americans did not accept the continued abuse and dehumanization. The injustice inspired the next wave of the African American freedom struggle. It led to the birth and development of the New Negro generation. This generation of activists fought for racial equality throughout the 1920s and 1930s. They prioritized economic rights and better paying jobs. They wanted access to better education opportunities. These activists elevated African American culture and worked to stop racial violence.

Williams, Chad. “African-American Veterans Hoped Their Service in World War I Would Secure Their Rights at Home. It Didn't.” Time. November 12, 2018. https://time.com/5450336/african-american-veterans-wwi/ 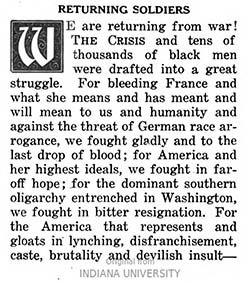 "Returning Soldier"
Editorial by W.E.B. Du Bois in The Crisis, May 1919

Blacks in the Military
Primary Sources from the National Archives