The Cold War: An Overview

The Cold War was a decades-long struggle for global supremacy that pitted the capitalist United States against the communist Soviet Union. Although there are some disagreements as to when the Cold War began, it is generally conceded that mid- to late-1945 marks the time when relations between Moscow and Washington began deteriorating. This deterioration ignited the early Cold War and set the stage for a dynamic struggle that often assumed mythological overtones of good versus evil.

At the close of World War II, the Soviet Union stood firmly entrenched in Eastern Europe, intent upon installing governments there that would pay allegiance to the Kremlin. It also sought to expand its security zone even further into North Korea, Central Asia, and the Middle East. Similarly, the United States established a security zone of its own that comprised Western Europe, Latin America, Southeast Asia, Australia, New Zealand, and Japan. From the long view of history, it is clear that both sides were jockeying for a way to secure their futures from the threat of another world war, but it was the threat that each side perceived from the other that allowed for the development of mutual suspicion. It was this mutual suspicion, augmented by profound distrust and misunderstanding that would ultimately fuel the entire conflict.

Interestingly, for the first few years of the early Cold War (between 1945 and 1948), the conflict was more political than military. Both sides squabbled with each other at the UN, sought closer relations with nations that were not committed to either side, and articulated their differing visions of a postwar world. By 1950, however, certain factors had made the Cold War an increasingly militarized struggle. The communist takeover in China, the pronouncement of the Truman Doctrine, the advent of a Soviet nuclear weapon, tensions over occupied Germany, the outbreak of the Korean War, and the formulation of the Warsaw Pact and the North Atlantic Treaty Organization as rival alliances had all enhanced the Cold War's military dimension. U.S. foreign policy reflected this transition when it adopted a position that sought to "contain" the Soviet Union from further expansion. By and large, through a variety of incarnations, the containment policy would remain the central strategic vision of U.S. foreign policy from 1952 until the ultimate demise of the Soviet Union in 1991.

Successive American presidents and successive Soviet premiers tried to manage the Cold War in different ways, and the history of their interactions reveals the delicate balance-of-power that needed to be maintained between both superpowers. Dwight Eisenhower campaigned as a hard-line Cold Warrior and spoke of "rolling back" the Soviet empire, but when given a chance to dislodge Hungary from the Soviet sphere-of-influence in 1956, he declined. The death of Stalin in 1953 prefaced a brief thaw in East-West relations, but Nikita Kruschev also found it more politically expedient to take a hard line with the United States than to speak of cooperation.

By 1960, both sides had invested huge amounts of money in nuclear weapons, both as an attempt to maintain parity with each other's stockpiles, but also because the idea of deterring conflict through "mutually assured destruction" had come to be regarded as vital to the national interest of both. As nuclear weapons became more prolific, both nations sought to position missile systems in ever closer proximity to each other's borders. One such attempt by the Soviet government in 1962 precipitated the Cuban Missile Crisis, arguably the closest that the world has ever come to a large-scale nuclear exchange between two countries.

It was also in the early 1960s that American containment policy shifted from heavy reliance on nuclear weapons to more conventional notions of warfare in pursuit of a more "flexible response" to the spread of communism. Although originally articulated by President Kennedy, it was in 1965 that President Johnson showcased the idea of flexible response when he made the initial decision to commit American combat troops to South Vietnam. American thinking had come to regard Southeast Asia as vital to its national security, and President Johnson made clear his intention to insure South Vietnam's territorial and political integrity "whatever the cost or whatever the challenge."

The United States ultimately fought a bloody and costly war in Vietnam that poisoned U.S. politics and wreaked havoc with its economy. The Nixon administration inherited the conflict in 1969, and although it tried to improve relations with the Soviets through detente – and even took the unprecedented step of establishing diplomatic relations with Communist China – neither development was able to bring about decisive change on the Vietnamese battlefield. The United States abandoned the fight in 1973 under the guise of a peace agreement that left South Vietnam emasculated and vulnerable.

Although Nixon continued to negotiate with the Soviets and to court Maoist China, the Soviet Union and the United States continued to subvert one another's interests around the globe in spite of detente's high-minded rhetoric. Leonid Brezhnev had been installed as Soviet premier in 1964 as Kruschev's replacement, and while he too desired friendlier relations with the United States on certain issues (particularly agriculture), genuinely meaningful cooperation remained elusive.

By the end of the 1970s, however, the chance for an extended thaw had utterly vanished. Jimmy Carter had been elected president in 1976, and although he was able to hammer out a second arms limitation agreement with Brezhnev, the 1979 Soviet invasion of Afghanistan significantly soured U.S.-Soviet relations. Seeking to place a greater emphasis on human rights in his foreign policy, Carter angrily denounced the incursion and began to adopt an increasingly hard line with the Soviets. The following year, Americans overwhelmingly elected a president who spoke of waging the Cold War with even greater intensity than had any of his predecessors, and Ronald Reagan made good on his promises by dramatically increasing military budgets in the early 1980s.

Nonetheless, by 1985 Mikhail Gorbachev had replaced Brezhnev in Moscow, and he quickly perceived that drastic changes to the Soviet system were necessary if the USSR was to survive as a state. He instituted a series of liberal reforms known as perestroika, and he seemed genuinely interested in more relations with the West, known as glasnost. Although President Reagan continued to use bellicose language with respect to the Soviet Union (as when he labeled it an "evil empire"), the Gorbachev-Reagan relationship was personally warm and the two leaders were able to decrease tensions substantially by the time Reagan left the White House in 1989.

Despite improved East-West relations, however, Gorbachev's reforms were unable to prevent the collapse of a system that had grown rigid and unworkable. By most measures, the Soviet economy had failed to grow at all since the late 1970s and much of the country's populace had grown weary of the aged Communist hierarchy. In 1989 the spontaneous destruction of the Berlin Wall signaled the end of Soviet domination in Eastern Europe, and two years later the Soviet government itself fell from power.

The Cold War had lasted for forty-six years, and is regarded by many historians, politicians, and scholars as the third major war of the twentieth century. 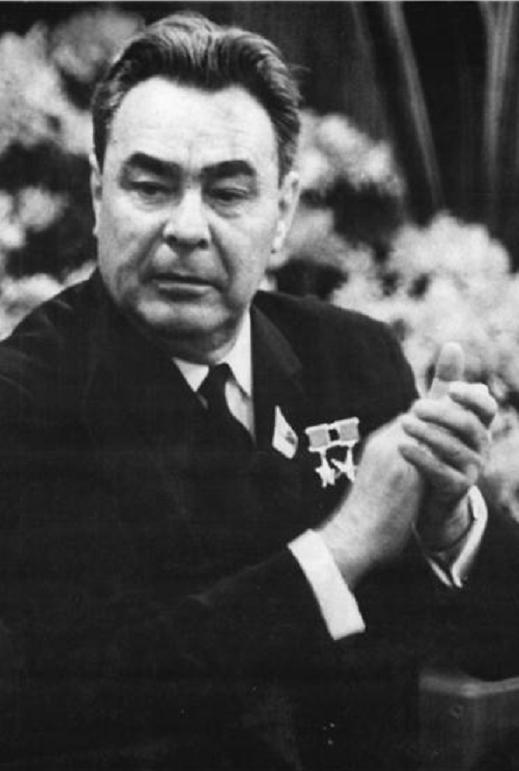 Marshall Plan (1948)
from the National Archives

Aerial Photograph of Missiles in Cuba (1962)
from the National Archives 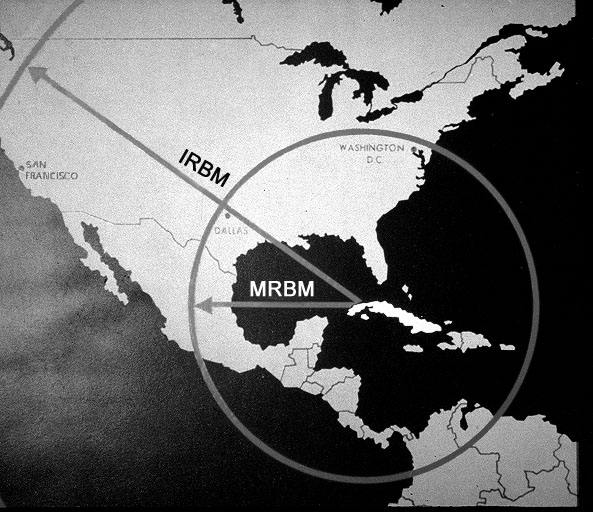 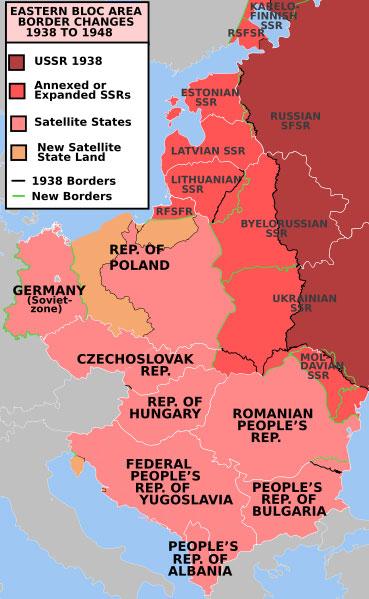 This map shows the communist states of Eastern Europe from 1938 to 1948.