Nationally, the election of 1972 is remembered for Richard Nixon's decisive victory over the Democratic nominee, George McGovern. Nixon had been elected president in 1968 on a "law and order" campaign, winning the support of moderate voters who were growing wary of the pace of change, the increasing radicalism of activists, and the images of hippies and protesters on their television screens. What Nixon called his "silent majority" propelled him to victory, and continued to support him even as support for the war in Vietnam diminished.

McGovern, a liberal senator from South Dakota, called for an end to the Vietnam War and a guaranteed minimum income for the poor. He won the Democratic nomination despite opposition from the party's establishment. Many states held primary elections for the first time in 1972, and McGovern did well in the primaries, where party leaders often had little influence. But the grassroots activists who had led his primary campaign couldn't engineer a victory in the November election. Nixon carried every state but Massachusetts and won the popular vote by a margin of 60.7 percent to 37.5 percent.

Despite Nixon's landslide, both houses Congress remained firmly in the hands of Democratic majorities. But in the South, there were signs of the change that would eventually give the Republicans a national majority.

In North Carolina, television commentator Jesse Helms won the Republican nomination for the U.S. Senate. His opponent was Nick Galifianakis, a U.S. Representative, who defeated two-term incumbent Senator B. Everett Jordan in the primary. Although Galifianakis, like Helms, opposed busing, he was seen as too liberal for most North Carolina voters. Many white North Carolinians did not support the changes that had already taken place in the 1960s, and they were not about to support more. (In 1970, they had defeated an amendment to the state constitution that would have eliminated the literacy test for voting.)

Helms won 54 percent of the vote in the general election, becoming the first Republican Senator from North Carolina since Reconstruction and the first ever elected by popular vote. Helms would be re-elected four times, serving as U.S. Senator until 2003.

Although Holshouser was succeeded by a Democrat, James B. Hunt, and although a majority of North Carolina voters remained Democrats, the Republicans were gaining strength in the state and across the South. In the 1980s, southern votes would propel Republicans to the White House, and in 1994, southern voters would sweep Republicans to their first Congressional majorities in forty years. 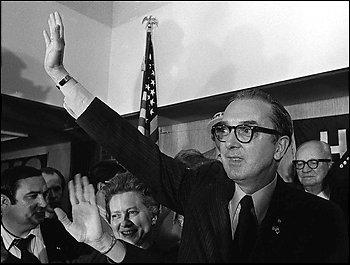 Jesse Helms celebrates his 1972 election to the U.S. Senate