The Lost Landscape of the Piedmont

The Piedmont region of North Carolina is unrecognizable compared to the landscape of 400 years ago. Where man-made lakes now sit were huge bottomland forests. While pine trees accounted for only a small percentage of Piedmont acreage, they now dominate the region's forests -- a result of clearing hardwoods to create farmland. Other once-prominent landscapes include areas of grassland known as “Piedmont prairie,” and upland depression swamps where the clay soils often kept moisture on the land’s surface.

If Mike Baranski could time-travel back to 16th century Rowan County, one of his first stops would be High Rock Lake.

The best way to understand the magnitude of the change is to visualize how the site looks now compared to 400 years ago:

If you see a huge man-made lake like High Rock, Baranski says, “you can assume that it’s over what was once a bottomland forest. I would have liked to have seen the original land under High Rock Lake. I imagine the forest there would have been huge and spectacular.”

Bottomland forests, such as the one that probably stood at High Rock, typically produced the largest hardwood trees among North Carolina’s old-growth forests. “Some of those trees would have been gigantic, maybe four, five, six feet in diameter,” Baranski says.

In the late 20th century, such trees are a rarity in the Piedmont. Boone’s Cave State Park in Davidson County is one of the few areas in the Rowan area where some large old-growth trees survive, Baranski says.

Many hardwood trees would have routinely reached over three feet in diameter in precolonial times, he says. Common hardwoods were oaks, cottonwoods, sycamores and ashes.

In the days when Spanish explorers crisscrossed the Southeast, pine trees — now a fixture of the Piedmont landscape — accounted for a small percentage of Piedmont acreage. Pines became the dominant tree in much of the Piedmont only after European settlers began clearing vast sections of hardwood trees to create farmland in the 1700s, followed by the abandonment of many farms.

Near Barber, in western Rowan County, lies another site Baranski would like to visit if he could travel back four centuries. There, he would look for two once-prominent habitats:

Small numbers of buffalo — actually, woodland bison — grazed there. A “buffalo wallow” near Youngs Mountain in western Rowan continues today as one of the fragments of that once-significant ecosystem.

Many European explorers left written records describing the Piedmont prairie in parts of the old Southeast. The accounts of the Juan Pardo expedition of the 1560s mention that the Piedmont contained “very large and good plains... clear land.”

John Lawson, an English explorer, described the grasslands found in the Rowan area in 1701. He wrote that while approaching the Sapona Indian village at Trading Ford, his party journeyed “about 25 miles over pleasant savanna ground, high and dry, having very few trees upon it, and those standing at a great distance apart....

“A man near Sapona may more easily clear 10 acres of ground than in some places he can clear one.”

The Rev. Jethro Rumple made a similar point in his 1881 history of Rowan County. One longtime resident, Rumple wrote, claimed that when his father had settled in Rowan around 1750, the region “was destitute of forests.” That early pioneer farmer, Rumple wrote, “had to haul the logs for his house more than a mile.”

The Barber area also has remnants of the former wetlands called upland depression swamps. Both the prairies and the wetlands appeared in Barber because of the particular nature of the soil there. In the 1990s, all that remains of those former ecosystems, in many cases, is an isolated plant here and there.

In studying those areas, Baranski is pursuing what he calls an “ecological detective story,” trying to unravel the mysteries behind these forgotten parts of Rowan County’s landscape. “Right now we’re only looking at fragments and pieces and trying to put them together and imagine what they were like,” he says.

A third area the Catawba biologist would like to see in its precolonial condition is in eastern Rowan. In the days of Juan Pardo’s 1567 visit to Rowan, small plants clung to granite outcroppings and spread across the slaterock soil, forming a unique habitat.

“A lot of plants are special to these places,” Baranski says. “These are some of our rarest places now, from a plant point of view.”

The plants have largely disappeared now as timbering and quarrying operations have proliferated — and because we have suppressed the natural occurrence of wild fires.

Fire played an enormously important role in shaping the destinies of plant life in precolonial Rowan, Baranski says. Because modern society places such importance on containing fires, the notion that fire can be beneficial might seem hard to grasp. But in precolonial days, fire — whether caused by lightning or by Indians — produced ecological cycles that were quite healthy for the habitat.

“Different ecosystems depended on fire — some more and some less,” Baranski says. “Prairies are areas where fire is a very important component. Without fire, hardwoods take over.”

Indians, writes Lawrence Barden, a biologist at the University of North Carolina at Charlotte, “have lived in the Piedmont region of the Southeastern United States for 12,000 years. They burned the forest to improve hunting, to facilitate travel and, for the last 1,500 years, to clear fields for agriculture.”

“When a fire would break out back then,” Baranski says, “it would go for a long ways. It may have burned thousands and thousands of acres before it ended.”

Once fires became a rarity, the landscape inevitably changed. The forest slowly crept onto the grasslands. First, the bison and elk disappeared from the Piedmont prairie. Soon thereafter, so did the prairie itself.

By Geitner Simmons. Originally published as "Prairies and bottomland forests are among Rowan’s lost habitats" in the Salisbury Post, Salisbury, N.C., 1999. 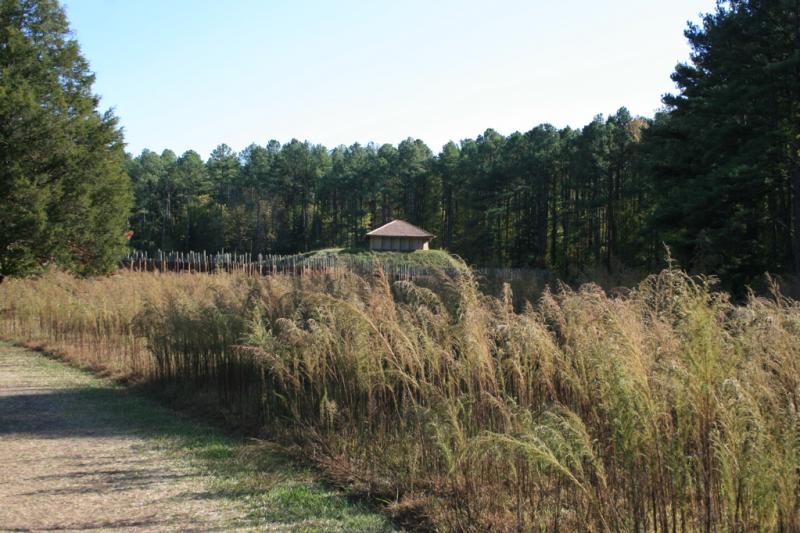 At Town Creek Indian Mound, caretakers are working to restore the prairie plant community that existed when the Pee Dee occupied the site