Although Hurricane Floyd was the biggest storm of 1999 and the one most remembered, eastern North Carolina was hit by three hurricanes in a six-week period in September and October that year. All brought large amounts of rain. Hurricane Dennis (September 4...œ5) saturated the ground. Floyd (September 14-16) created the worst of the flooding. Then, a month later, Hurricane Irene (October 17) brought rivers and streams back to the flood stage.

The maps and charts on this page will help you analyze where and when the rain fell and why the flooding was so bad.

Paths of the hurricanes

The image below is a satellite image of eastern North Carolina, with tracks for Hurricanes Dennis, Floyd, and Irene, September...œOctober 1999. The red lines represent boundaries of river basins. If you look closely, you can see flooding along the Tar, Neuse, and Waccamaw rivers, as well as sediment plumes in Albemarle Sound and the Pamlico River.

Hurricane Floyd was a very large storm -- much larger than most hurricanes, even many that were far more powerful. It also moved very slowly across eastern North Carolina, which is why rainfall totals were so high. The following animation shows satellite images of the storm for September 15 and 16; the numbers at the bottom show the date and time of each image.

Rainfall from Hurricanes Dennis and Floyd

The maps in the margins show rainfall in eastern North Carolina during the passage of hurricanes Dennis and Floyd, with the locations of selected rain gauges.

The table below shows rainfall amounts from hurricanes Dennis, Floyd, and Irene at various locations in central and eastern North Carolina, with normal totals for the same period. The locations are divided by river basin (see below).

By comparing the maps and data of rainfall totals with this map of river basins, we can see why flooding occurred where it did. A river basin is all the land drained by a given river. All rain that falls in the Cape Fear River basin, for example, runs off into streams and smaller rivers that eventually join the Cape Fear before it ends in the Atlantic Ocean. If there is a great deal of rainfall in a river basin, that river is likely to flood downstream -- even if the locations downstream didn't get much rain.

Based on this map and the data and map above, which rivers would you predict were most likely to flood?

The data below, provided by the U.S. Geological Survey, shows how high the water was at various streamgaging stations (stations where stream or river information is measured) at the peak of flooding. The recurrence interval is how often the river was expected to be that high. Note that in some places, the waters overflowed the 500-year floodplain -- the region where flooding would reasonably be expected an average of once every 500 years! (See this discussion of floodplains.)

Compare these flood levels with your predictions above. Were you right?

Rivers and river basins of North Carolina, with cities and county outlines shown for reference. 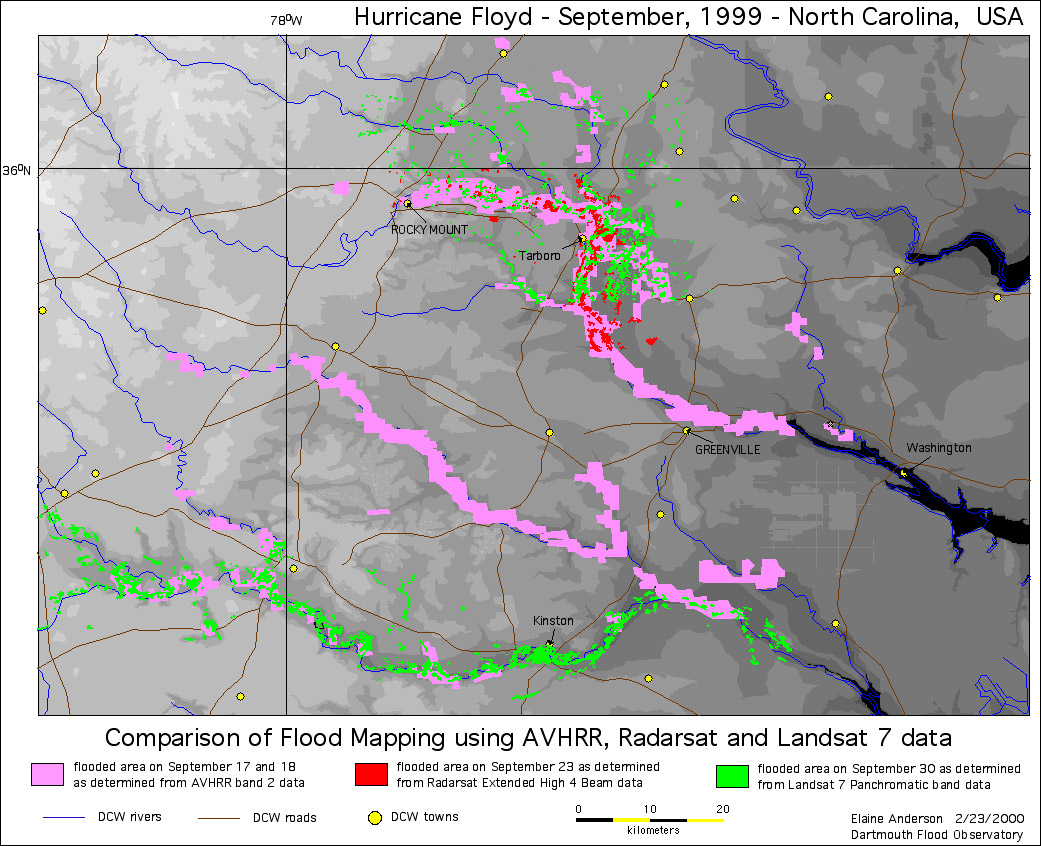 This flood map shows a comparison of the flood data collected by AVHRR (pink pixels), Radarsat (red pixels), and Landsat 7 (green pixels). These colors show areas that were flooded in the wake of Hurricane Floyd. Due to interference from clouds and forest canopies, geographers often get the best insight into a flood when they use data from multiple satellite sensors.