North Carolina has within its borders the highest mountains east of the Mississippi River, a broad, low-lying coastal area, and all the land in between. That variety of landforms, elevations, and climates has produced as diverse a range of ecosystems as any state in the United States. It has also influenced the way people have lived in North Carolina for thousands of years.

Geologists divide North Carolina into four provinces -- regions with common features. These four regions have unique landforms, soil types, and plant and animal communities. From west to east, they are the Blue Ridge Mountains, the Piedmont, and the Coastal Plain, which is divided into an Inner and an Outer Coastal Plain. 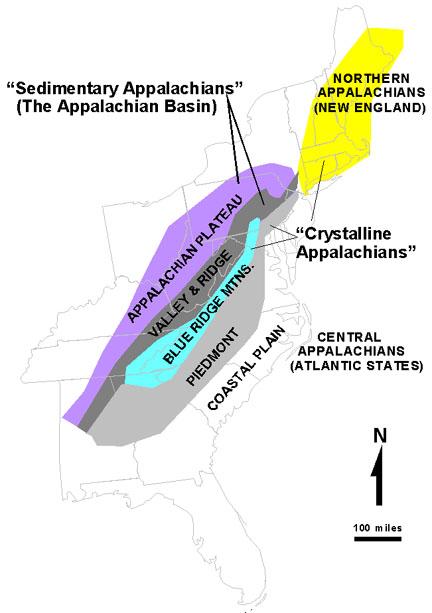 Remember, though, that although North Carolina's eastern and western boundaries are natural ones -- the ocean and the Appalachian mountains -- its northern and southern boundaries are simply lines drawn on a map. No natural features mark the borders with Virginia, South Carolina, or Georgia. The Coastal Plain, Piedmont, and mountains continue up and down the east coast of the United States. 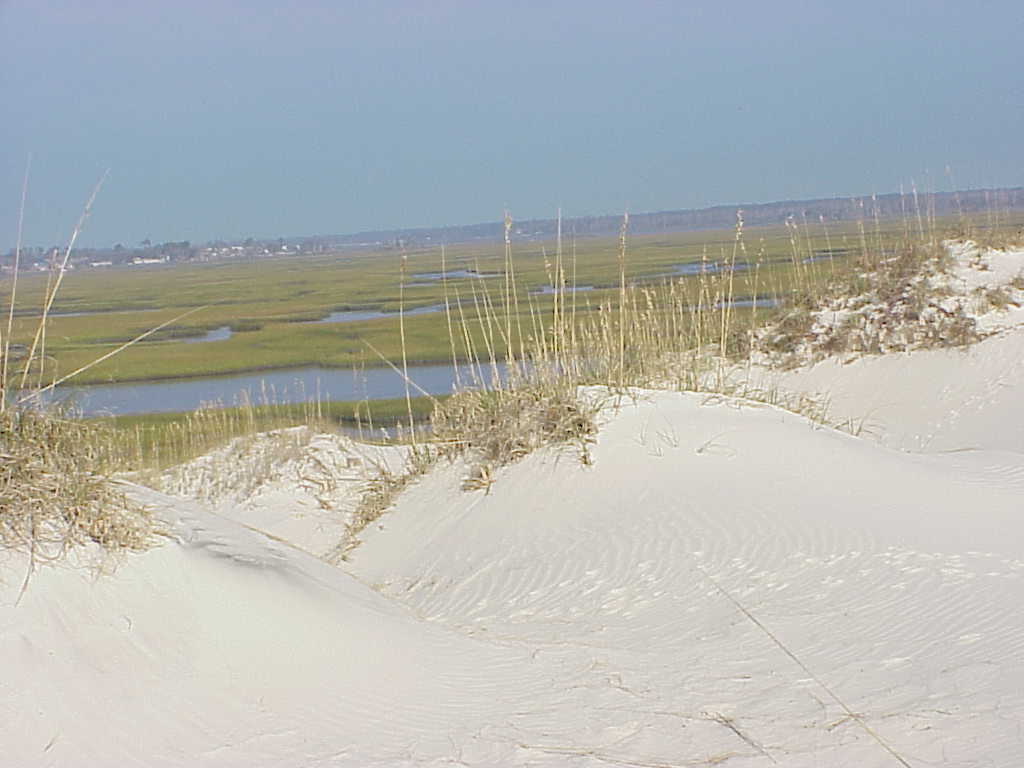 The Coastal Plain is the easternmost region of North Carolina. From the Atlantic Ocean it rises gently to the west, stretching as far as Raleigh and Fayetteville and covering about 45 percent of the state's total land area.

At various times in the distant past, sea level was higher, and parts of the Coastal Plain lay under the ocean. As the ocean retreated, it left sandy ridges across the coastal plain that still remain -- visible evidence of the old shorelines. The greatest of these ridges is the fall line that separates the Coastal Plain from the Piedmont. When rivers flowing to the sea reach the fall line or another escarpment formed by an ancient shoreline, they form falls -- hence the term. When European settlers arrived in North Carolina, they could travel up the rivers by boat as far inland as the falls, but there they had to stop and find another form of transportation. They often founded trading posts at the first falls of rivers, which eventually grew into towns and cities. Those towns were linked by roads, and today, I-95 follows the fall line along much of the east coast.

North Carolina's barrier islands, including the Outer Banks, were formed by ocean currents in a rising sea that deposited sand along the coast. Because of these sand deposits, the waters off the barrier islands are very shallow, making them dangerous to navigate. But just as the islands are built up, waves and storms erode them, and rising sea levels threaten to swallow them entirely. Hurricanes frequently close inlets between islands and open new ones through the sand -- so frequently that when the English first settled here, those inlets were in very different places than they are today. 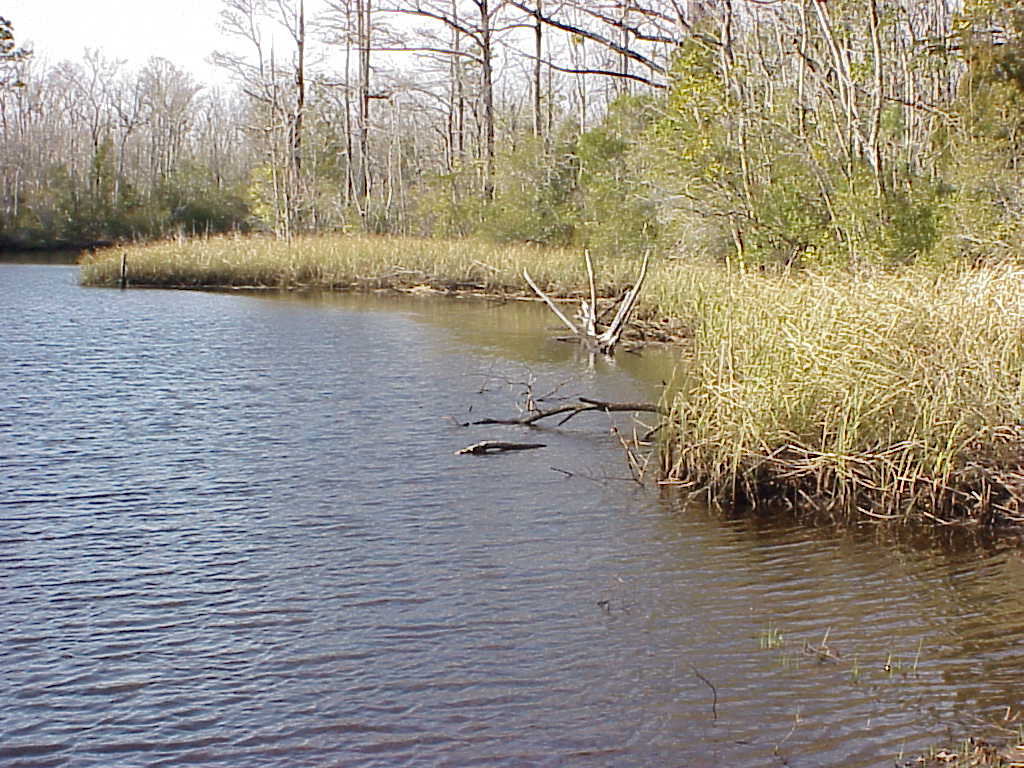 Because the rocks of the Coastal Plain are soft, as rocks go, and its soil is sandy -- and because it lies so close to sea level -- wetlands dominate the natural landscape. A wetland is a region in which the soil is filled with moisture and is saturated or covered with water at some time during each year. Had humans not drained much of the Coastal Plain, nearly all the land east of I-95 would be wetland today.

The width of the Coastal Plain, its poor drainage, its warm temperate climate, and the mix of habitats created by its history of being covered and uncovered by the sea have given this region an incredible diversity of wetlands. North Carolina has more than forty different types of wetlands, each with unique communities of plants and animals! Wetlands filter sediment and pollutants from the water supply and provide crucial habitat for threatened and endangered species of plants and animals, and federal laws now protect them from development.

The Outer Coastal Plain, or Tidewater, is the region along the coast, less than 20 feet above sea level, where the forces of the tides still cause the water to rise and fall in rivers and sounds. Here, wetlands take the form of estuaries, where fresh water from rivers mixes with salt water from the sea. The Outer Coastal Plain extends only about 20 to 30 miles inland, but it contains some of the state's most interesting ecosystems. 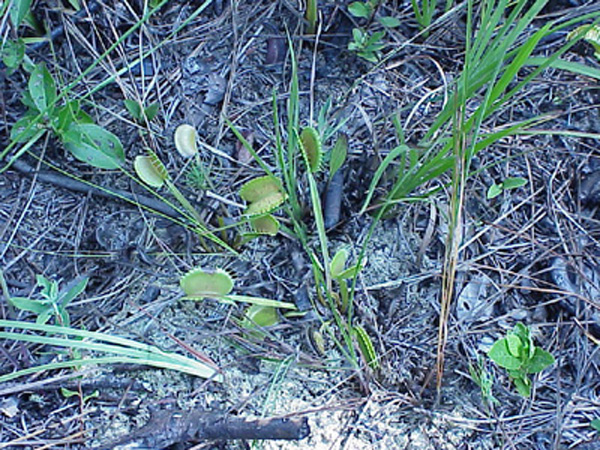 One of the best-known features of the Inner Coastal Plain is the Sand Hills, a large, unusual deposit of sand far from the coast. Formed as sediment eroded from the Blue Ridge and Piedmont and winds piled the sands into dunes, the Sand Hills were once covered by now-rare longleaf pine savanna and still provide habitats for endangered species such as the red-cockaded woodpecker.

In the Piedmont -- which means "foot of the mountains" -- the land rises more rapidly, forming rolling hills. Rivers flow more rapidly here, too, than in the Coastal Plain, which makes travel by water more difficult. But because the rolling, wooded hills of the Piedmont are easy to cross on foot and by vehicle, it provided both American Indians and early European settlers with a natural corridor for transportation from Pennsylvania and New York as far south as Georgia. Today, I-85 follows this corridor through the Carolinas. 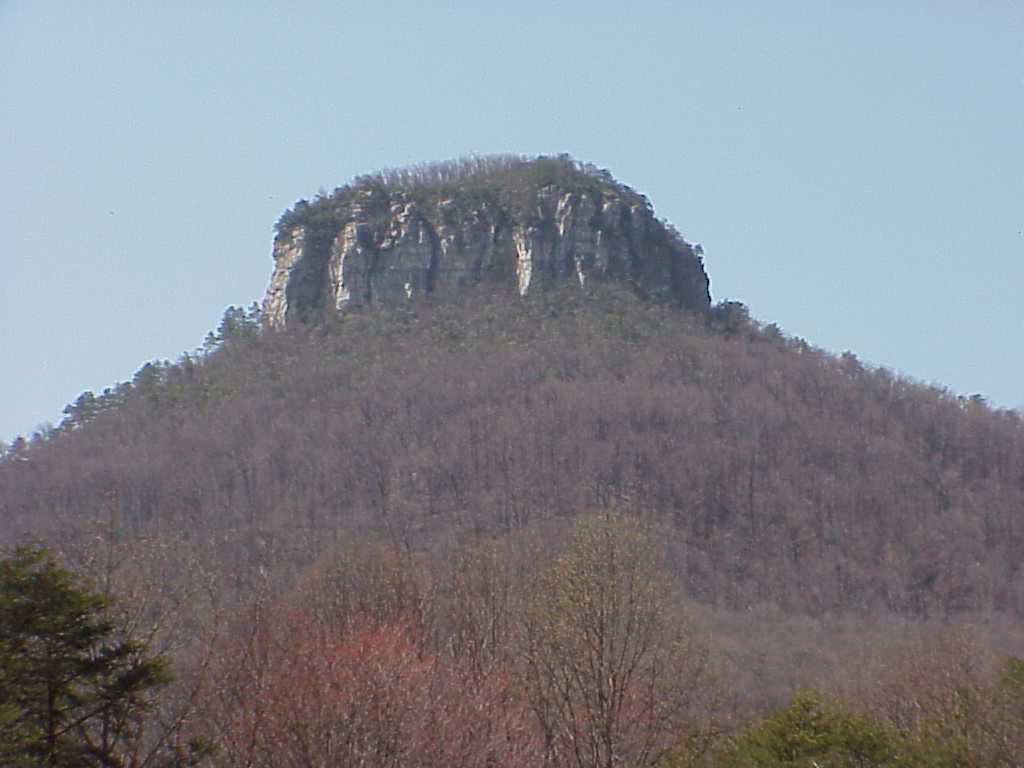 The rock under the Piedmont is harder than in the coastal plain, and a great deal of clay makes agriculture more difficult than in the Coastal Plain but provides raw material for pottery; it is no coincidence that the potters' community of Seagrove is located in the Piedmont. Some of the rocks in the Piedmont contain valuable minerals -- including gold, which was discovered in Cabarrus County in 1799. These and other natural resources, as well as the ease of transportation and the availability of fast-flowing rivers for water power, made the Piedmont the center of North Carolina's manufacturing and industry.

In some parts of the Piedmont, the underying rock is harder and slower to erode. As the land around these regions eroded, it left behind hills or low mountains called monadnocks. The Uwharrie Mountains, Sauratown Mountains (including Pilot Mountain and Hanging Rock), South Mountains, Brushy Mountains, and Kings Mountain are all monadnocks. Because these "lonely mountains" are higher above sea level and therefore cooler than the surrounding land, they can provide habitats for plants and animals that are not otherwise found east of the Blue Ridge. 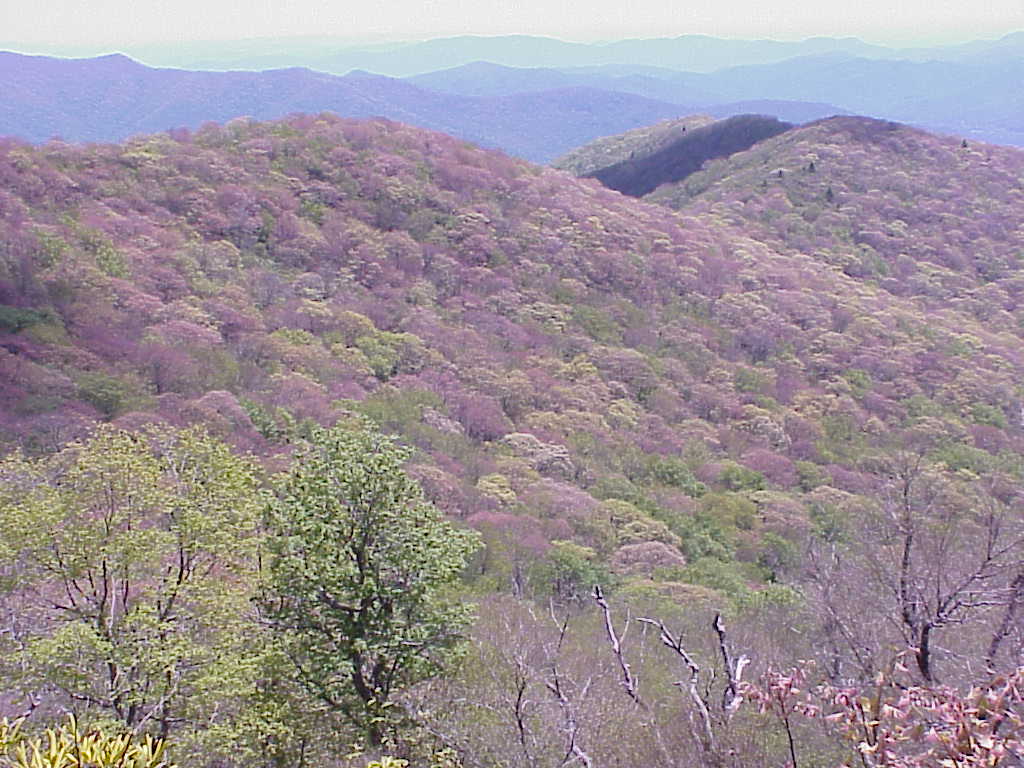 At its western edge, the Piedmont rises 1,500 feet above sea level, and the Blue Ridge Mountains begin. The Blue Ridge Mountains are part of the great Appalachian chain that stretches from northern Alabama all the way to southeastern Canada. North Carolina's mountains include Mount Mitchell, which at 6,684 feet is the highest peak in the eastern United States.

The rapidly changing elevations of the Blue Ridge provide homes for a number of different kinds of forests. The average temperature declines about 5.5 degrees Fahrenheit with each 1,000-foot increase in elevation above sea level -- 22 degrees' difference between Asheville and Mount Mitchell, only eighteen miles away! This diversity means that almost half of all the higher plant species (such as trees and flowers) that occur in North Carolina are found in the Blue Ridge, along with more than 350 species of moss, 2,000 species of fungi, 67 species of mammals, and 50 species of salamander.

The Blue Ridge also includes a rare temperate rain forest, Jocassee Gorges, along the North Carolina-South Carolina border. Erosion has worn deep gorges between the mountains where warm, moist air is trapped and condenses into rain. Some tropical species of plants found in Jocassee Gorges are thousands of miles from their nearest neighbors, in Central and South America.

The regions of North Carolina are linked by one thing -- water. Water falls as rain everywhere in North Carolina, of course, but its path back to the sea begins on the highest peaks of the Blue Ridge. There, rivulets of rainwater flow downhill and collect into tiny streams, which merge into larger and larger streams and eventually become the state's rivers. These rivers flow out of the Blue Ridge and through the Piedmont, draining runoff from more and more land as they go. By the time they reach the Coastal Plain, they are broad and slow-moving. Near the coast they feed estuaries and other wetlands that maintain delicate ecosystems. 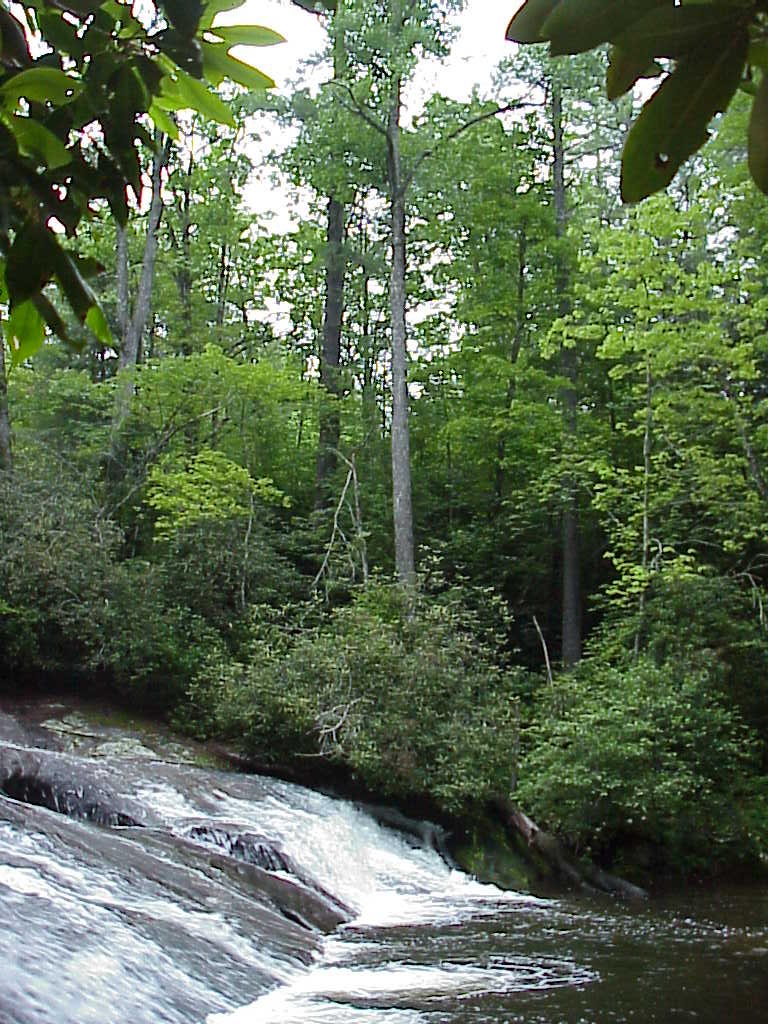 The area drained by a single river into the sea is called a river basin (or, sometimes, a watershed). The map above shows the state's river basins. Not all of the rivers that flow through North Carolina empty onto our coast; some flow further south into South Carolina and Georgia, or west into Tennessee. Some also start farther north, in the mountains of Virginia. Because all parts of a river basin are connected by water, all life in a single river basin is connected and interdependent.

On the map you can also see a line running along the state's western border, labeled "Blue Ridge." This marks the literal ridge of the mountains -- the line of highest peaks. Rain that falls to the east of this line flows east and forms rivers that empty into the Atlantic Ocean, while rain that falls west of it flows west and south to the Gulf of Mexico. Because this line divides the continent's ecosystems, it is called the Eastern Continental Divide. (Along the highest peaks of the Rocky Mountains, the Great Continental Divide divides land draining into the Gulf of Mexico -- and then, eventually, into the Atlantic -- from land draining into the Pacific Ocean.)

On the coast: Sounds 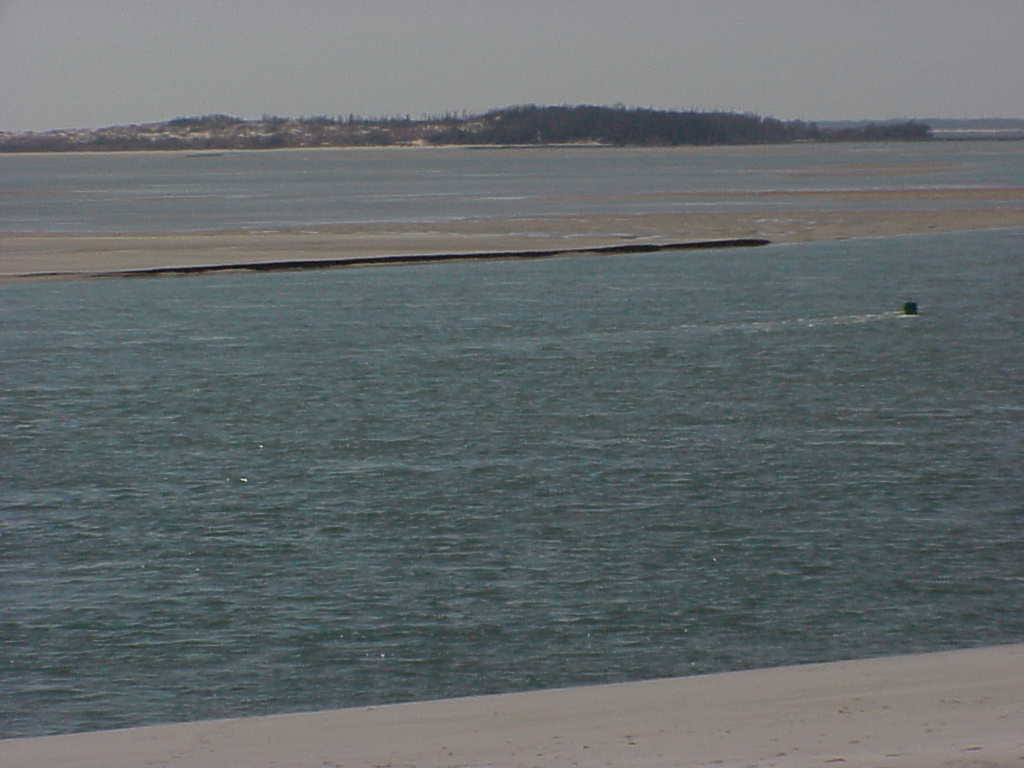 Only one of North Carolina's rivers empties directly into the Atlantic Ocean on the state's coast -- the Cape Fear River, which empties near Wilmington and makes that city North Carolina's most important port. The other rivers that stay within North Carolina empty into sounds -- sheltered, shallow bodies of water between the barrier islands and the coast. The Pasquotank, Chowan, Roanoke, and Alligator rivers empty into the Albemarle Sound; the Neuse and Tar empty into the Pamlico Sound, and the White Oak empties into Bogue Sound near Jacksonville. North Carolina's sounds mix fresh water from rivers with salt water from the sea, creating the second-largest system of estuaries in the United States (after Chesapeake Bay).

Humans and the natural world

From the time the first humans settled in North Carolina -- some 10,000 years ago -- their lives were shaped by the region's geography. Mountains, rivers, wetlands, forests, plains all determined what kinds of lives people could live in various places. And, in turn, humans shaped the region's environment -- hunting animals, clearing forests, draining wetlands, damming rivers -- not only recently, but from the very beginning. North Carolina's history is in part the story of humans' interactions with the natural world, and understanding the natural world is the first step toward understanding that history.