Smallpox is a serious, contagious, and sometimes fatal infectious disease caused by the variola virus. There is no specific treatment for smallpox disease, and the only prevention is vaccination. The name smallpox is derived from the Latin word for "spotted" and refers to the raised bumps that appear on the face and body of an infected person.

The variola virus first emerged in human populations thousands of years ago. Historically, smallpox had a mortality rate of as much as 30 percent -- that is, it killed 30 percent of people who contracted it. Mortality was highest among infants and children. In the eighteenth century, smallpox killed some 60 million Europeans. In the Americas, it killed as much as 90 percent of the indigenous population after contact with Europeans introduced the disease. As late as 1967, some 2 million people worldwide died of smallpox.

Smallpox is now eradicated -- eliminated from nature -- after a successful worldwide vaccination program. The last case of smallpox in the United States was in 1949. The last naturally occurring case in the world was in Somalia in 1977. Smallpox is the only human infectious disease ever completely eradicated. Today, the variola virus exists only in laboratory stockpiles.

Generally, direct and fairly prolonged face-to-face contact is required to spread smallpox from one person to another. Smallpox also can be spread through direct contact with infected bodily fluids or contaminated objects such as bedding or clothing. Rarely, smallpox has been spread by virus carried in the air in enclosed settings such as buildings, buses, and trains. Humans are the only natural hosts of variola. Smallpox is not known to be transmitted by insects or animals.

Incubation period (7–17 days; not contagious)
Exposure to the virus is followed by an incubation period during which people do not have any symptoms and may feel fine. This incubation period averages about 12 to 14 days but can range from 7 to 17 days. During this time, people are not contagious.
Initial symptoms (2–4 days; sometimes contagious)
The first symptoms of smallpox include fever, malaise, head and body aches, and sometimes vomiting. The fever is usually high, in the range of 101 to 104 degrees Fahrenheit. At this time, people are usually too sick to carry on their normal activities. This is called the prodrome phase and may last for 2 to 4 days.
Early Rash (about 4 days; most contagious)
A rash emerges first as small red spots on the tongue and in the mouth.

These spots develop into sores that break open and spread large amounts of the virus into the mouth and throat. At this time, the person becomes contagious.

Around the time the sores in the mouth break down, a rash appears on the skin, starting on the face and spreading to the arms and legs and then to the hands and feet. Usually the rash spreads to all parts of the body within 24 hours. As the rash appears, the fever usually falls and the person may start to feel better.

By the third day of the rash, the rash becomes raised bumps.

By the fourth day, the bumps fill with a thick, opaque fluid and often have a depression in the center that looks like a bellybutton. (This is a major distinguishing characteristic of smallpox.)

Fever often will rise again at this time and remain high until scabs form over the bumps.

Until the late eighteenth century, the only way to prevent smallpox was by inoculation -- deliberately giving someone a weak case of the disease so that his or her body would develop an immunity to it and prevent a more deadly case of the disease later on. This might be done by rubbing pus from the sores of an infected person into a scratch or cut on the skin of a healthy person. Although inoculation had a mortality rate of 0.2 to 0.5 percent, it was far safer than taking chances with the full disease.

Inoculation was used to prevent smallpox in China by 1100 CE and was also widely understood in West Africa. According to several eighteenth-century accounts, African slaves taught methods of inoculation to European colonist. But inoculation was rarely used in Europe until the eighteenth century, and remained controversial for centuries afterwards.

In 1796, Edward Jenner, an English doctor, discovered that inoculation with cowpox would give a person immunity to smallpox as well. Cowpox and smallpox are closely related, but cowpox is a much less serious disease than smallpox, and so Jenner's form of inoculation was far safer than the traditional version. He called his method "vaccination," from the Latin word vacca, or cow, and today we use vaccination to refer to immunization against any disease.

The modern smallpox vaccine is made from a virus called vaccinia which is a related to smallpox. The smallpox vaccine contains the "live" vaccinia virus -- not dead virus like many other vaccines. For that reason, the vaccination site must be cared for carefully to prevent the virus from spreading. Also, the vaccine can have side effects. The vaccine does not contain the smallpox virus and cannot give you smallpox.

Smallpox vaccination provides high level immunity for 3 to 5 years and decreasing immunity thereafter. If a person is vaccinated again later, immunity lasts even longer. Historically, the vaccine has been effective in preventing smallpox infection in 95 percent of those vaccinated. In addition, the vaccine was proven to prevent or substantially lessen infection when given within a few days of exposure. It is important to note, however, that at the time when the smallpox vaccine was used to eradicate the disease, testing was not as advanced or precise as it is today, so there may still be things to learn about the vaccine and its effectiveness and length of protection.

The smallpox vaccine is not given with a hypodermic needle. It is not a shot as most people have experienced. The vaccine is given using a bifurcated (two-pronged) needle that is dipped into the vaccine solution. When removed, the needle retains a droplet of the vaccine. The needle is used to prick the skin a number of times in a few seconds. The pricking is not deep, but it will cause a sore spot and one or two droplets of blood to form. The vaccine usually is given in the upper arm.

If the vaccination is successful, a red and itchy bump develops at the vaccine site in three or four days. In the first week, the bump becomes a large blister, fills with pus, and begins to drain. During the second week, the blister begins to dry up and a scab forms. The scab falls off in the third week, leaving a small scar. People who are being vaccinated for the first time have a stronger reaction than those who are being revaccinated. The following pictures show the progression of the site where the vaccine is given. 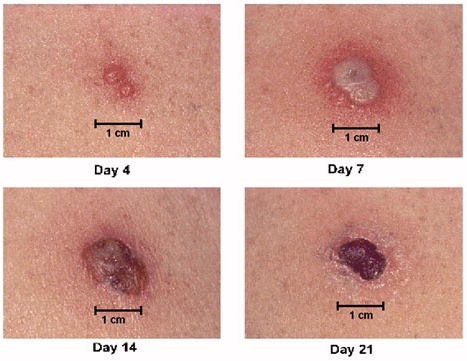 The smallpox vaccination site, days 4 through 21 after receiving the vaccine for the first time.

Adapted from "Smallpox Overview" provided by the U.S. Department of Health and Human Services and the Centers for Disease Control.

The variola virus first emerged in human populations thousands of years ago. Historically, smallpox had a mortality rate of as much as 30 percent -- that is, it killed 30 percent of people who contracted it." data-share-imageurl=""> 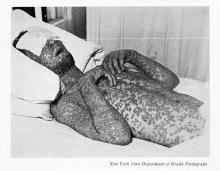 This photograph of a smallpox victim appeared in the Baltimore Health News in 1939 as a warning to people who had not been vaccinated.