The United States and World War I

To the American public of 1914, the outbreak of war in Europe – with Germany and Austria-Hungary fighting Britain, France, and Russia – came as a shock. At first the encounter seemed remote, but its economic and political effects were swift and deep. By 1915 U.S. industry, which had been mildly depressed, was prospering again with munitions orders from the Western Allies. Both sides used propaganda to arouse the public passions of Americans – a third of whom were either foreign-born or had one or two foreign-born parents. Moreover, Britain and Germany both acted against U.S. shipping on the high seas, bringing sharp protests from President Woodrow Wilson.

Britain, which controlled the seas, stopped and searched American carriers, confiscating "contraband" bound for Germany. Germany employed its major naval weapon, the submarine, to sink shipping bound for Britain or France. President Wilson warned that the United States would not forsake its traditional right as a neutral to trade with belligerent nations. He also declared that the nation would hold Germany to "strict accountability" for the loss of American vessels or lives. On May 7, 1915, a German submarine sunk the British liner Lusitania, killing 1,198 people, 128 of them Americans. Wilson, reflecting American outrage, demanded an immediate halt to attacks on liners and merchant ships.

Anxious to avoid war with the United States, Germany agreed to give warning to commercial vessels – even if they flew the enemy flag – before firing on them. But after two more attacks – the sinking of the British steamer Arabic in August 1915, and the torpedoing of the French liner Sussex in March 1916 – Wilson issued an ultimatum threatening to break diplomatic relations unless Germany abandoned submarine warfare. Germany agreed and refrained from further attacks through the end of the year.

Wilson won reelection in 1916, partly on the slogan: “He kept us out of war.” Feeling he had a mandate to act as a peacemaker, he delivered a speech to the Senate, January 22, 1917, urging the warring nations to accept a "peace without victory."

The U.S. enters the war

On January 31, 1917, however, the German government resumed unrestricted submarine warfare. After five U.S. vessels were sunk, Wilson on April 2, 1917, asked for a declaration of war. Congress quickly approved. The government rapidly mobilized military resources, industry, labor, and agriculture. By October 1918, on the eve of Allied victory, a U.S. army of over 1,750,000 had been deployed in France.

In the summer of 1918, fresh American troops under the command of General John J. Pershing played a decisive role in stopping a last-ditch German offensive. That fall, Americans were key participants in the Meuse-Argonne offensive, which cracked Germany's vaunted Hindenburg Line.

President Wilson contributed greatly to an early end to the war by defining American war aims that characterized the struggle as being waged not against the German people but against their autocratic government. His Fourteen Points, submitted to the Senate in January 1918, called for: abandonment of secret international agreements; freedom of the seas; free trade between nations; reductions in national armaments; an adjustment of colonial claims in the interests of the inhabitants affected; self-rule for subjugated European nationalities; and, most importantly, the establishment of an association of nations to afford "mutual guarantees of political independence and territorial integrity to great and small states alike."

In October 1918, the German government, facing certain defeat, appealed to Wilson to negotiate on the basis of the Fourteen Points. After a month of secret negotiations that gave Germany no firm guarantees, an armistice (technically a truce, but actually a surrender) was concluded on November 11.

The League of Nations

It was Wilson's hope that the final treaty, drafted by the victors, would be even-handed, but the passion and material sacrifice of more than four years of war caused the European Allies to make severe demands. Persuaded that his greatest hope for peace, a League of Nations, would never be realized unless he made concessions, Wilson compromised somewhat on the issues of self-determination, open diplomacy, and other specifics. He successfully resisted French demands for the entire Rhineland, and somewhat moderated that country’s insistence upon charging Germany the whole cost of the war. The final agreement (the Treaty of Versailles), however, provided for French occupation of the coal and iron rich Saar Basin, and a very heavy burden of reparations upon Germany.

In the end, there was little left of Wilson's proposals for a generous and lasting peace but the League of Nations itself, which he had made an integral part of the treaty. Displaying poor judgment, however, the president had failed to involve leading Republicans in the treaty negotiations. Returning with a partisan document, he then refused to make concessions necessary to satisfy Republican concerns about protecting American sovereignty.

With the treaty stalled in a Senate committee, Wilson began a national tour to appeal for support. On September 25, 1919, physically ravaged by the rigors of peacemaking and the pressures of the wartime presidency, he suffered a crippling stroke. Critically ill for weeks, he never fully recovered. In two separate votes – November 1919 and March 1920 – the Senate once again rejected the Versailles Treaty and with it the League of Nations.

The League of Nations would never be capable of maintaining world order. Wilson’s defeat showed that the American people were not yet ready to play a commanding role in world affairs. His utopian vision had briefly inspired the nation, but its collision with reality quickly led to widespread disillusion with world affairs. America reverted to its instinctive isolationism.

The transition from war to peace was tumultuous. A postwar economic boom coexisted with rapid increases in consumer prices. Labor unions that had refrained from striking during the war engaged in several major job actions. During the summer of 1919, race riots occurred, reflecting apprehension over the emergence of a “New Negro” who had seen military service or gone north to work in war industry.

Reaction to these events merged with a widespread national fear of a new international revolutionary movement. In 1917, the Bolsheviks had seized power in Russia; after the war, they attempted revolutions in Germany and Hungary. By 1919, it seemed they had come to America. Excited by the Bolshevik example, large numbers of militants split from the Socialist Party to found what would become the Communist Party of the United States. In April 1919, the postal service intercepted nearly 40 bombs addressed to prominent citizens. Attorney General A. Mitchell Palmer’s residence in Washington was bombed. Palmer, in turn, authorized federal roundups of radicals and deported many who were not citizens. Major strikes were often blamed on radicals and depicted as the opening shots of a revolution.

Palmer's dire warnings fueled a "Red Scare" that subsided by mid-1920. Even a murderous bombing in Wall Street in September failed to reawaken it. From 1919 on, however, a current of militant hostility toward revolutionary communism would simmer not far beneath the surface of American life.

from US Department of State 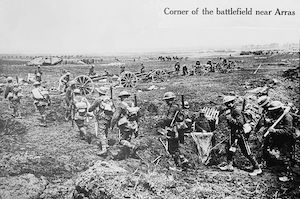 U.S. Participation in the Great War (World War I)

Zimmermann Telegram (1917)
From the National Archives

From the National Archives 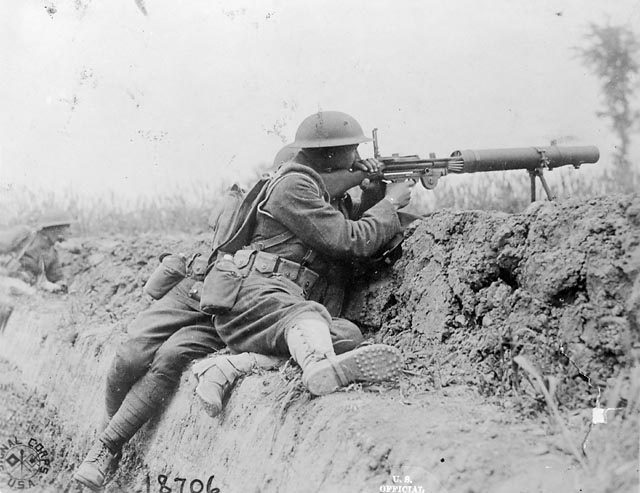 A machine gunner from the 115th Machine Gun Battalion, 30th Division takes aim as he sits next to another soldier on an earthen ledge of a trench. 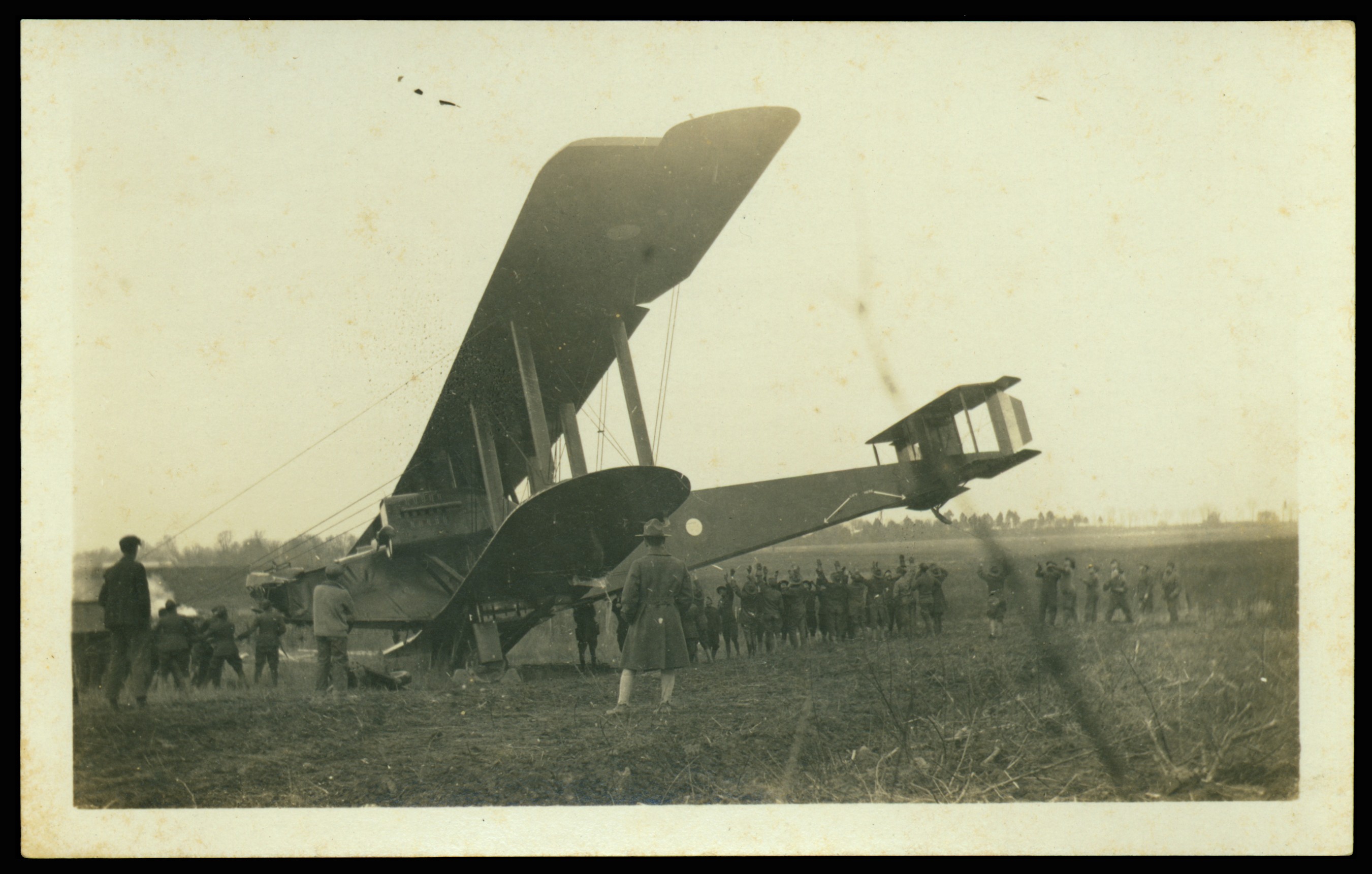 Soldiers reach to hold lines attached to a military biplane in a field. The plane, which had been nose first into the ground, is being pulled upright by the soldiers. A tank in a field during World War I. Tank warfare began during the first world war.

from the National World War I Museum and Memorial