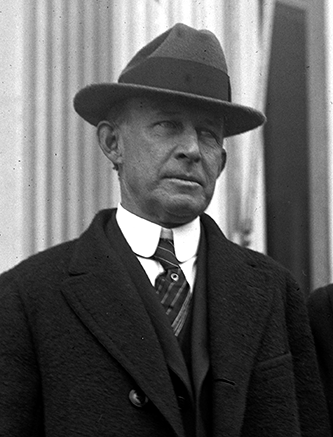 James Crawford Biggs, jurist and U.S. solicitor general, was born in Oxford, the son of William Biggs and his wife, Elizabeth Arrington Cooper. William Biggs, a former captain in the Confederate Army, practiced law for a short time after the Civil War; later he turned to free lance, pro-Conservative journalism, editing the Tarboro Southerner and the Oxford Free Lance and eventually helping to organize the North Carolina Press Association. James Crawford Biggs's paternal grandfather was Asa Biggs, judge and senator; his maternal grandfather, James Crawford Cooper, a banker and merchant, was chairman of the Granville County Board of Commissioners.

Biggs was graduated from the Horner Military School in 1887 and then worked for two years before entering The University of North Carolina. He was graduated from the university summa cum laude in 1893 with the degree of Ph.B.; the valedictorian of his class, he had won the Greek medals for 1891 and 1892 and the Willie P. Mangum Medal for his senior oration, "The True American." He was elected to Phi Beta Kappa and joined Zeta Psi, the Philanthropic Literary Society, and the Order of the Gimghouls. He served as editor of both the Tar Heel and the yearbook, the Hellenian, and as an associate editor of the University Magazine. He was elected chief marshal of the commencement of 1892 and president of his senior class. A proficient baseball player, Biggs was also the star end on the university's celebrated football squad of 1892, which won the unofficial southern collegiate championship.

After graduation, Biggs taught school in Virginia and then returned to Chapel Hill in 1894 to study law; he was admitted to the bar that same year. Opening practice in Oxford, he almost immediately rose to distinction. In 1895 he associated with R. W. Winston and F. L. Fuller of Durham in the firm of Winston, Fuller, and Biggs. He was soon elected chairman of the Granville County Democratic Executive Committee and mayor of Oxford for two terms (1897–98).

In 1898, Biggs was appointed assistant professor of law at The University of North Carolina, to succeed Thomas D. Warren. His tenure was brief (1898–1900) but eventful. On the death of Dr. John Manning in February 1899, he was named acting dean of the law school. About the same time, he became involved in the campaign for the organization of a state-wide bar association. He saw the need for such an organization to oversee professional standards and practice, approached several prominent attorneys, drafted a proposed constitution and by-laws, and then, on 21 Jan. 1889, distributed a circular letter calling for a meeting in Raleigh on 10 Feb. of the same year. At that meeting, his constitution was adopted and he himself was elected secretary and treasurer of the new association, posts he held until his elevation to the bench; it is his "painstaking and enthusiastic work" that is given major credit for the association's survival and growth. Throughout his career, Biggs remained active in bar association affairs, strongly advocating stricter educational standards for lawyers. In 1914 he was elected president of the North Carolina Bar Association; in 1930 he was president of the Wake County bar; and in 1933 he was elected vice-president of the American Bar Association from the Fourth Federal Circuit.

Meanwhile, in 1900, Biggs reentered practice in Durham, first as an associate of R. B. Boone and V. S. Bryant in the firm of Boone, Bryant, and Biggs, and later as an associate of R. P. Reade in Biggs and Reade. Again he advanced rapidly and soon was attorney for Durham County. In 1902 he was chairman of the Durham County Democratic Executive Committee and in 1905 he was elected for one term to the state house of representatives. From 1905 to 1907 he acted as a supreme court reporter. At the age of only thirty-four, he was nominated on the first ballot over two other contenders at the Democratic convention for the Ninth Judicial District for a seat on the state superior court. He was elected and served as a justice until 1911, when he resigned to become a professor of law at Trinity College (1911–12).

A staunch Progressive and an anti-Simmons man, Biggs supported the abortive "Progressive Democratic Convention" in Raleigh in April 1914 and was a member of the committee, together with Josiah Bailey, Clarence Poe, Dr. H. Q. Alexander, Alfred M. Scales, and Augustus Graham, designated to present the convention's resolutions to the regular Democratic State Convention's platform committee. Perhaps as a result, his own political career was dormant until August 1917, when he was appointed special assistant to the U.S. attorney general for the prosecution of the Southern Pacific Railroad for land fraud. Biggs's successful prosecution earned him a national reputation in the field of land claims and further federal appointments. In 1919 he argued for the U.S. government before the Supreme Court in the celebrated "Elks' Hills" case; and in 1920 and 1921, he was again a special assistant, directing the condemnation proceedings against the land on which Fort Bragg was located.

In 1928, Biggs publicly supported Al Smith for president. In May 1929, Governor O. Max Gardner appointed him chairman of the state board of elections, a post he held until 1932. Then, in a surprise move in April 1933, President Franklin D. Roosevelt appointed him solicitor general of the United States.

Biggs's traditionalism (he required all his subordinate attorneys to appear in court in frock coats with long tails) and his deep reverence for the Supreme Court and the power of judicial review soon clashed, however, with the philosophy and style of the younger, more liberal New Deal officials. Gradually, as many important matters as possible were channeled around his office. Finally Biggs resigned in March 1935; perhaps Roosevelt's letter of regret, which was headed "Dear Clay" instead of "Dear Crawford," best illustrates Biggs's isolation from the White House.

Nevertheless, Biggs maintained connections with Roosevelt's administration. In May 1935, on the nomination of Jesse Jones of the Reconstruction Finance Corporation, he was elected to a one-year term as a neutral director of the Wheeling and Lake Erie Railroad, then a center of controversy (and occasional physical violence) between rival shareholding factions. Between 1935 and 1938 he was again a special assistant to the attorney general, for the prosecution of claims against the Northern Pacific Railway Company concerning nearly 2.8 million acres of public land.

The rest of Biggs's career, until his retirement in 1950, was given to private practice in Washington, D. C., and in Raleigh. He died at his home, Hardimont estate, outside Raleigh, and was buried in Oakwood Cemetery.

A typewritten manuscript of Biggs's address "The Supreme Court of the United States," delivered to the annual meeting of the Maryland State Bar Association, 29 June 1934, is in the North Carolina Collection of the Library of The University of North Carolina.