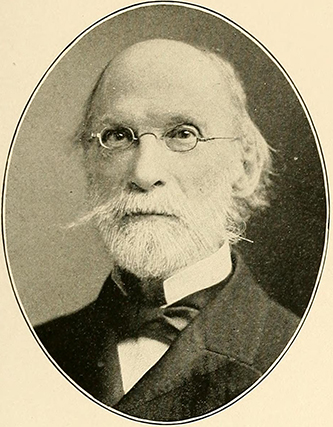 Nathaniel Hill Burgwin, corporation lawyer, civic leader, and Episcopal layman, was born at the Hermitage, the ancestral home of the Burgwin family in New Hanover County. He was the son of George William Bush Burgwin, Cape Fear planter, and his wife, Maria Nash, daughter of Governor Abner Nash. He is believed to have been named after Dr. Nathaniel Hill, who lived on the adjoining plantation, Cricket Hill.

Gifted with a brilliant mind, he began to prepare for college at the age of eight when he was enrolled in the noted school of William J. Bingham at Hillsborough. Within five years he was ready to enter The University of North Carolina, but his extreme youth prevented his enrollment until 1840. At that time he was admitted as a member of the sophomore class. Burgwin earned the highest honors in his class but was unable to complete his studies because of poor health. In 1842, at the age of seventeen, he began reading law under his brother-in-law, Judge Thomas S. Ashe. Later, he did further study with his uncle, Frederick Nash, who was appointed chief justice of the state supreme court. Long before reaching the age of twenty-one, Burgwin had passed his bar examinations; he was not allowed to practice, however, until attaining his majority. Admitted to the bar in 1847, he opened an office in Elizabeth City and began his practice.

Moving to Pittsburgh, Pa., in 1851, Burgwin continued to practice law until his retirement in 1890. He enjoyed a highly profitable and successful practice there. His career was filled with cases of paramount importance. In the County of Allegheny v. Pittsburgh and Connelsville Railroad Company, he represented the defendant with success; this was a test case involving one hundred thousand dollars and determined liabilities in excess of one million dollars for the defendant. On another occasion, Burgwin was involved in Linton and wife v. J. B. Neal et al. Burgwin brought this suit in equity into the U.S. Circuit Court when its jurisdiction was sustained against the Orphan's Court of the State of Pennsylvania. This case dealt with the settlement of the accounts of the various executors, guardians, and trustees appointed by the will of James Brown of Kittaning. Afterward, the substantial estate, consisting of property in several states, was divided among the heirs.

Burgwin represented Mechanics National Bank of Pittsburgh and the Pittsburgh Marine Bank. He was solicitor for the Dollar Savings Bank, in addition to being its oldest vice-president and oldest member of its board of trustees. He was also director of the Pittsburgh and Connelsville Railroad Company.

Active in politics, Burgwin adopted the Whig viewpoint in his youth. Following the actions of Henry Clay, however, he assumed an independent position. In Pittsburgh, he ran on the Citizen's ticket and was elected to represent Ward Twenty-three on the select council from 1869 until 1875. During this time he was chairman of the committee appointed to select a location for a city park. Under his leadership, the land now comprising Schenley Park was chosen.

A devout Episcopalian, Burgwin was extremely active in the affairs of his church. He spearheaded the effort that led to the division of the diocese of Pennsylvania to form the diocese of Pittsburgh in 1865. From 1871 until the time of his death, he represented his diocese in the general convention. He was a member of the committee on canons after 1871. In addition, he served on the committee to revise the constitution of the general convention and on the 1880 joint committee of twenty-one bishops, priests, and laymen that revised the Book of Common Prayer. An authority on canon law, Burgwin was frequently consulted by both clergymen and laymen. He was chancellor of the diocese of Pittsburgh for many years.

Burgwin died at Hassell Hill, his home in Pittsburgh. A portrait of him is now in the possession of George Collinson Burgwin of Pittsburgh.