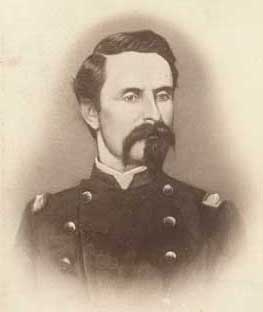 John Benton Callis, military leader and congressman, was born in Fayetteville. His parents moved to Tennessee when he was six years old and to Lancaster, Grant County, Wisconsin, six years later. Callis was schooled sporadically in the common schools in areas where he lived. He studied medicine for three years but abandoned the study before receiving a degree. He moved to Minnesota in 1849 and became one of the contractors building Fort Gaines (later known as Fort Riley).

In 1851, wanderlust took Callis to California, where he developed interests in mining and merchandising. In early 1853 he went to Central America, and six months later he returned to his former home, Lancaster, Wisc., spending seven years there in the mercantile business.

When the Civil War began in 1861, Callis joined the Wisconsin forces of the Union army as a lieutenant and soon became captain of the Seventh Regiment, Wisconsin Volunteer Infantry. The Seventh Regiment of the Wisconsin Volunteer Infantry is often mentioned in historical records as being part of the noteworthy "Iron Brigade". Two years later he was promoted to major in the same unit. Then, following a wound at the Battle of Gettysburg, he was honorably discharged on 29 Nov. 1863. 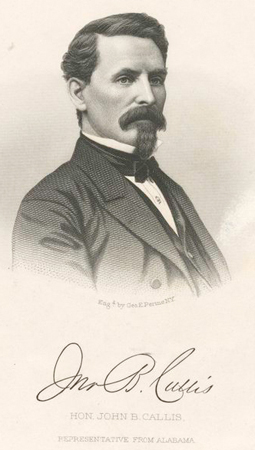 The following year, President Lincoln appointed him military superintendent of the War Department, with headquarters in Washington, D.C., and there he served until December 1865. In the previous February he had been promoted to lieutenant colonel, and on 13 Mar. 1865 he was breveted colonel and brigadier general of the volunteers, being cited "for efficient and meritorious services." Subsequently, he was appointed captain in the Forty-fifth Regiment, U.S. Infantry. His military prowess at the Battle of Gettysburg resulted in his being again breveted as major, in 1867.

By 1865, Callis had settled in Huntsville, Ala., where he was named assistant commissioner of the Freedmen's Bureau. He held the post until 4 Feb. 1868, the same date he resigned his commission in the army.

After Alabama's readmission to the Union, Callis was a successful Republican candidate for the U.S. House of Representatives from the Fifth Alabama District. He served in the Fortieth Congress for less than a year (21 July 1868 to 3 Mar. 1869) and was not a candidate for reelection. During his short stay in Congress he was very vocal and exerted considerable leadership; he was the author of a resolution that served as a basis for the famous Ku Klux Klan Bill in the Forty-first Congress.

In mid-1869, Callis moved his family from Huntsville, Ala., to resettle in Lancaster, Wisc. He established a prosperous real estate business, to which he devoted his energies for the rest of his life.

In 1874, Callis made one further venture into public life, when he was elected to the Wisconsin General Assembly; he served for one year. He died in Lancaster and was buried in the Hillside Cemetery there.