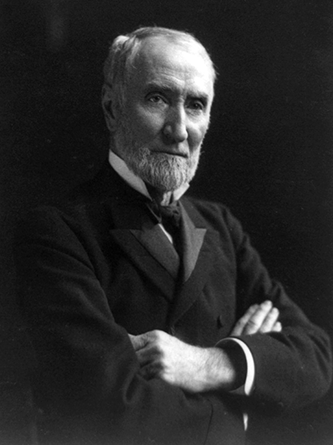 Joseph Gurney Cannon, congressman and speaker of the U.S. House of Representatives, was born in New Garden, Guilford County, the son of Gulielma Hollingsworth and Dr. Horace Franklin Cannon, one of the founders of Guilford College. The family moved to Indiana when Cannon was six and afterward moved to Illinois. Cannon had a common school education and spent six months at the Cincinnati Law School; he was awarded an honorary LL.D. degree in 1903 by the University of Illinois. Admitted to the bar in 1858, he practiced first in Terre Haute, Ind., but within a few months moved to Tuscola, Ill. In that state he served as district attorney general from 1861 to 1868. He was elected as a Republican to Congress; during his service there (1873–91, 1893–1913, and 1915–23), he epitomized a certain style of congressional behavior, the man of pungent language, rough manners, decidedly illiberal views, and autocratic parliamentary authority. He was speaker of the House from 1903 to 1911 and received fifty-eight votes for the presidential nomination at the Republican National Convention in Chicago in 1908.

In Congress, Cannon served on the Committee on Post Offices and Post Roads; was a member of the Holman Commission, which investigated conditions on Indian reservations; and was active in the consideration of governmental reforms, in the currency and tariff debates, in the advocacy of a larger navy and reorganization of the army, and in the discussion of shipping and the Isthmian canal. He declined appointment to the peace commission after the War with Spain. As speaker he exemplified strong one-man rule, but he was finally defeated as speaker by a coalition of younger men from both parties; for many years afterward the House speakership was held by leaders of a different style. Nevertheless, Cannon, often known as "Uncle Joe," was popular personally. The first office building for congressmen in Washington was named for him—Cannon House Office Building—and there are four portraits and a bust of him on Capitol Hill.

Cannon married Mary P. Reed in January 1862; they were the parents of two daughters. He was a Quaker and remained proud of his North Carolina heritage, returning on occasion to visit the scene of his early childhood. He was buried in Spring Hill Cemetery, Danville, Ill.

W. H. Smith, Speakers of the House of Representatives of the United States (1928).

"Speaker of the House Joseph Gurney Cannon of Illinois." Office of the Historian, U.S. House of Representatives. http://history.house.gov/Historical-Highlights/1800-1850/Speaker-of-the-House-Joseph-Gurney-Cannon-of-Illinois/ (accessed December 16, 2013).