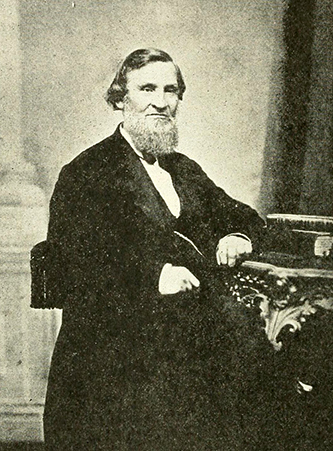 William Dewey Cooke, educator of the deaf, editor, publisher, and cartographer, was born in Williston, Vt., to Milo and Harriet Bulkley Cooke. He was educated in Middlebury College, Middlebury, Vt., receiving the B.A. degree in 1832.

Cooke appears to have commenced his professional life by giving private instruction to students in Staunton, Va. After his marriage in 1834 he served jointly with his father-in-law, Lyttleton Waddell, as principal of Staunton Academy. Afterward he taught in Waynesville, Va., and was then briefly associated with his brothers H. B. and Robert L. in their Bloomfield (N.J.) Female Seminary. Though Cooke never lost interest in the New Jersey school, he soon gave up active participation in it in order to study for two years under Harvey Prindle Peet (1794–1873) in the New York Institution for the Instruction of the Deaf and Dumb, where he was awarded the M.A. degree.

In 1840, Cooke returned to Staunton; a school for the deaf, established there in the year of his marriage, was in the early 1840s entertaining plans of expansion both of physical plant and faculty. At the end of two years, in which he taught deaf students privately, it became apparent to him that delay in enlarging the school in Staunton would defer indefinitely the realization of his hope to be added to its faculty. In October 1843, consequently, he entered into correspondence with Governor John Motley Morehead on the subject of a private school for the deaf in North Carolina. The governor was receptive to the proposal and for the purpose offered Cooke the use of a tavern building he owned in Leakesville. Cooke considered Raleigh the proper location for such a school, however, and a visit to North Carolina in the winter of 1843–44 confirmed his opinion. Further correspondence with North Carolinians and appeals to various Presbyterian bodies suggested a public rather than a private school; as a result, Cooke sought public support for his proposal in a second visit to the state.

On 28 Dec. 1844, Cooke and his pupil Daniel M. Albright of Greensboro demonstrated to the General Assembly of North Carolina the method of teaching the deaf. The demonstration created a sensation. Eleven days later an act to establish the North Carolina Institution for the Deaf (now the Governor Morehead School) was ratified by the General Assembly. A few days after passage of the act, the literary board met and appointed Cooke principal, with instructions to open the school as soon as possible. The institution accepted its first students and opened on 1 May 1845. For the next fifteen years, Cooke served as head of the school and in this capacity made a lasting contribution to the state. In the fall of 1860 he resigned in order to accept the principalship of the Georgia Institution for the Education of the Deaf and Dumb, located at Cave Springs. After the Georgia school was closed during the Civil War, Cooke removed to Maryland, where he became principal of that state's school for the deaf. In 1871 he returned to Staunton to become principal teacher in Virginia's Institution for the Education of the Deaf, Dumb, and Blind; he remained there until his death.

As part of the curriculum of the North Carolina Institution for the Deaf, Cooke, characterized as possessing "a wonderful genius for mechanics," engaged a printer and established a press at the school. His brief experiment with the periodical the Deaf Mute (1849–51) appears to have led him into editing and publishing. His next venture was a literary newspaper, the Southern Weekly Post (6 Dec. 1851–24 Nov. 1855); Calvin Henderson Wiley originally coedited the newspaper but was forced to resign by the press of his duties as superintendent of common schools. Simultaneously with the newspaper, Cooke published and edited other periodicals. As a member and secretary of the executive committee of the Agricultural Society of North Carolina, he interested himself in agricultural developments in North Carolina and during 1853 and 1854 published John F. Tompkins's Farmer's Journal. When it failed, Cooke edited and published the Carolina Cultivator (March 1855–October 1857), with the assistance of Benjamin Sherwood Hedrick, professor of agricultural chemistry in The University of North Carolina. Through the university's Historical Society of North Carolina, of which he was a member, he became involved in the mounting movement to stir up public interest in the history of the state. From its revival in January 1852 through March 1857, Cooke published the University of North Carolina Magazine for the society, and in 1853 he compiled and published essays by Francis Lister Hawks, David Lowry Swain, and William Alexander Graham under the title Revolutionary History of North Carolina.

Cooke's brief association with Calvin H. Wiley led him into other fields. As early as 1852, Wiley and Cooke were joined by Samuel Pearce of Hillsborough in a joint effort to compile a gazetteer, natural history, and authoritative map of the state (the most recent predecessor, executed by Robert H. B. Brazier, was two decades old). Cooke immediately brought out a modest Outline Map of North Carolina (1852), and the three men set about gathering necessary data for their considerably more ambitious project. Though the General Assembly supported their proposal for a map, Wiley disengaged himself from the venture in 1854 in order to devote his total effort to common schools. Probably as a result of Wiley's withdrawal, Cooke and Pearce restricted their effort to the compilation of a map. They were successful, and in 1857 the map was published (presumably through the press of the Institution for the Deaf) under the title Cooke's New Map of North Carolina ; Pearce's name was included in small letters in the lower right corner of the map, but with no statement of credit or explanation. In July 1858, Joseph Hutchins Colton of New York republished the map, still under date of 1857, using a newly engraved plate from which reference to Pearce had been excised. As an authority, this map was replaced within a decade by Pearce's New Map of the State of North Carolina. Cooke's experience with his and Pearce's compilation apparently guided him in his subsequent Map of the Routes to the Virginia Springs, Giving All Routes and Distances  . . . , lithographed in Richmond by Ritchie and Dunnavant in 1858.

A stockholder and director of the North Carolina Mutual Life Insurance Company, Cooke resigned his position as a member of its executive committee before leaving for Georgia. He maintained his membership and interest in the Presbyterian church and the Independent Order of Odd Fellows until his death of bronchitis in Staunton, Va.