Robert H. B. Brazier, cartographer and civil engineer, was born of unknown parentage in Great Britain, where he received his professional training under John Rennie (1761–1821), the Scottish civil engineer chiefly remembered as the designer of Southwark, Waterloo, and London bridges, the London and East India docks, Plymouth breakwater, and so on. Brazier came to North Carolina in company with Hamilton Fulton in July 1819, at the instigation of Peter Browne, and entered into a contract with the commissioners as assistant to the principal engineer. His contract was not confirmed by the board of internal improvements until February 1820, though he had already entered upon his duties under Fulton, who had been appointed principal engineer. Browne's endorsement of Fulton and Brazier brought the two engineers under fire from Browne's political opponents, and efforts to manipulate the internal improvements programs to secure the major benefit for the eastern region of the state resulted in organized opposition by legislators from the Piedmont and Western regions. The continued existence of the board of internal improvements itself was precarious. Unexpectedly, the principal engineer of the State of Virginia died, and in 1822 Brazier applied to that state's board of public works for the post, in the hope of stabilizing his professional position and of finding more congenial working conditions. As his references he named William Ruffin, the celebrated teacher of law, William Nichols, architect of North Carolina, and Governor Gabriel Holmes. He was unsuccessful in his application and remained at his post in North Carolina. 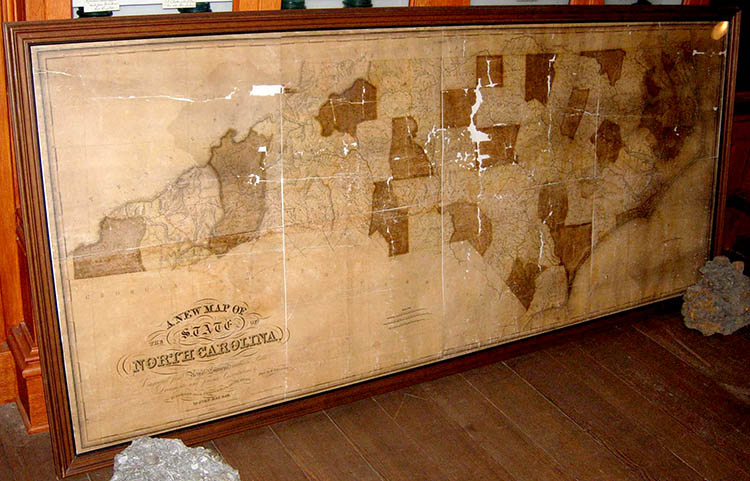 Despite what can only have been a galling situation, marked by an ever deteriorating relationship with the board of internal improvements and reductions in salary during the years 1820 through 1823, Brazier completed surveys and drew maps, plans, profiles, and transverse sections of the principal North Carolina watercourses from Yadkin River east to Roanoke Inlet. After an altercation over his account of expenses, Brazier resigned his office as assistant engineer effective 19 Feb. 1824 and then wrote what the board of internal improvements chose to view as a "disrespectful" letter, in which he demanded settlement of the controversial account. Brazier's resulting lawsuit against the board was successfully concluded in Wake County Superior Court when he was awarded damages in 1825.

After a two year period in which he made patent drawings and undertook private surveying (including the survey of the Buncombe Turnpike), Brazier resumed a contractural relationship with the board of internal improvements. He commenced his survey of the state's swamp lands in the spring of 1827 and was considered by the board the assistant engineer to the state, this time under Alanson Nash, who had been hired from New York, on the recommendation of DeWitt Clinton, following Hamilton Fulton's departure from the state. After presenting his report on the swamp lands to the General Assembly late in 1827, and his expense accounts to the board of internal improvements early in 1828, Brazier's connection with internal improvements in North Carolina came to an end.

For the next few years, Brazier supported his family by private surveying and by delineating survey plats for landowners in Wake and surrounding counties. His map of the route from Raleigh to Cobb's Mill (1831), his survey plat of the 7,383-acre Jeffreys tract in Wake and Franklin counties (1832), and his plan of the Rolesville tract in Wake County (1833) are typical examples of his piecework. During this period the position of principal engineer to the State of Virginia became vacant once more, and in 1831 Brazier again applied for the office. Governor Montfort Stokes, jurist and U.S. senator James Iredell, Attorney General Romulus M. Saunders, and several other state officers and leading citizens of Raleigh testified to Brazier's skill as a practical surveyor, expressing to the Virginia board their opinion that "as a Draughtsman, it is believed that [Brazier] has no superior in the country." But the application failed of success. Brazier was, however, given brief employment by the Virginia Board of Public Works, and in 1831 he completed surveys and drawings of "A Plan of the Blackwater River from New South Quay to Rattlesnake Swamp" and "A Survey of a Proposed Line of Canal from Blackwater River to Pagan Creek Near Smithfield."

Simultaneously with these smaller efforts, Brazier undertook his greatest work. He had, in 1821 and again in 1822, been one of the commissioners appointed by the General Assembly to lay out anew and map the streets of Fayetteville. At this time, presumably, he made the acquaintance of the legislator, newspaper publisher, and Fayetteville postmaster, John MacRae. By 1825, MacRae had conceived the notion of bringing out a new, authoritative map of the state. In 1826 he presented this idea to the General Assembly and won its approbation and support. Through the assistance of Governor John Owen, MacRae in 1829 secured the services of Lieutenant William Henry Harford of the U.S. Corps of Engineers for production of the projected map, but nothing came of their joint efforts. At this point, MacRae turned to Brazier, whose handsome plan of Fayetteville he had published in 1825. By July 1831, Brazier had completed most of the surveying required for the map, and his finished manuscript was ready for the engraver in 1832. The responsibility for engraving the map was entrusted to Henry Schenck Tanner of Philadelphia, and the finished prints were published jointly by MacRae in Fayetteville and Tanner in Philadelphia in 1833. Published under the title "A New Map of the State of North Carolina Constructed from Actual Surveys, Authentic Public Documents and Private Contributions," this carefully drawn and elegantly executed map was the first authoritative work of its kind to appear since Jonathan Price and John Strother completed their surveying of the state in 1798 and published their map in 1808. Brazier's map of North Carolina remained the standard authority for cartographers until 1857, when it was superseded by the compilation of William D. Cooke and Samuel Pearce. In addition to the acknowledged edition of 1833, updated editions of Brazier's map were brought out without attribution of authorship by Wellington Williams of Philadelphia in 1854 and 1856.

After this major achievement of mapping the state, Brazier's life entered a rapid decline. During the period between the end of his employment by the board of internal improvements and the beginning of his work with MacRae, he had suffered financial reverses from which he never recovered. In May 1830 the mortgage on his Raleigh property had been foreclosed, and both real and personal property had been lost. By 1833 it was necessary for the charitable fund of Christ Church, Raleigh, to come to the aid of his family. In an effort to regain financial solvency, Brazier joined eleven associates in a speculative venture involving some Campbellton lots in Fayetteville in 1834, but this speculation failed to recoup his fortunes. In 1836 his affairs and finances fell to a new low, and he was again obliged to seek assistance from Christ Church. Then, following a severe ice storm during the Christmas holidays of 1836, Brazier fell from a pair of high steps and died of the effects in Raleigh. He was survived by his wife, Rachel, and his young son, James Henderson, both of whom were members of the Episcopal church; Brazier appears to have been an Anglican.

Though the rector of Christ Church very harshly wrote that Brazier had come to his death "by his own folly and wickedness," he acknowledged that the cartographer was a most excellent draughtsman "with the talents of an angel." In elegance of execution, Brazier set a standard yet to be met by a North Carolina cartographer. His original manuscript maps and surveys are characterized by a sureness of hand and eye, beauty of line, and delicacy of color. Brazier's principal surviving maps and surveys not otherwise noticed above are "Plan of Croatan and Roanoke Sounds Shewing the Proposed Situations of the Embankments and Inlet" (1820); "Plan and Sections of a Line of Canal From the Tar River to the Tossnot Creek and a Survey of that Creek to its Junction with the Contentney" (1820); "Plan and Sections of Part of Crab Tree and Walnut Creeks" (1820); "Plan of the Tar River from Louisburg to the Little Falls Showing the Proposed Situation of the Locks and Dams" (1821); "Longitudinal Section of the Tar River from Louisburg to the Great Falls" (1821); "Transverse Sections of the Tar River Between Louisburg and the Great Falls" (1821); "Transverse Sections of the Cape Fear River Between Buckhorn Falls and Campbellton" (1821); "Plan of the Cape Fear River Between Haywood and Campbellton And of a Proposed Line of Canal Between Foxes Islands and Campbellton" (1822); "Survey of the Cape Fear River from the Upper to the Lower Flats" (1823); "Plan of the Catawba River from the Devils Shoals to Near Sherril's Ford" (1824); "Longitudinal Section of the Catawba River from the Devils Shoals to the Mouth of Little Catawba River" (1824); "Plan of that Part of the Big Swamp Lying Between Sullivan's Mills & Lumber River in the County of Robeson" (1827); "Survey of the Great Swamp, Columbus County" (1827); "Plan of that Part of Uhara Swamp Lying Between the Road Leading from Jackson to Bryan's Cross Roads and Pottocasy Creek in the County of Northampton" (1827); "Plan of Part of Holly Shelter Swamp" (1827); "Plan of the Swamp Lands Between Albemarle and Pamlico Sounds" (1828); "Plan of the State Road from Fayetteville, Raleigh, Louisburg, Warrenton and Robinson's Ferry to the Virginia Line" (from H. Fulton's survey; 1822); and "Plan of the Road from Salem to Fayetteville by Randolph and Moore Court Houses" (from H. Fulton's survey, 1823). Works of Brazier not known to have survived, or yet to be discovered, are a survey of the Roundabout in Neuse River, Wayne County (1820); a survey of Tar River from the Great Falls to the Small Falls below Battle's Mills (1820); and a survey of at least a portion of Yadkin River (1820).

Virginia State Archives (Richmond), for Records of the Board of Public Works (Papers of Road Engineers and Assistants, 1825–82).