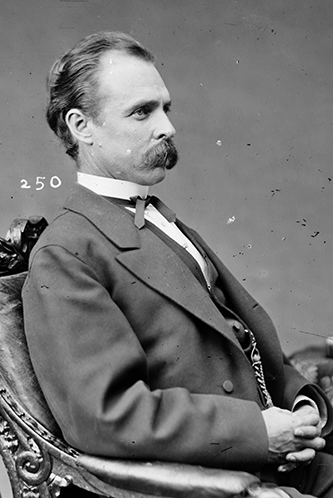 John Thomas Deweese, Union soldier and North Carolina congressman, was one of the most remarkable men who scrambled to prominence in North Carolina as a result of the Civil War and Reconstruction. His career was characterized by political opportunism and amoral conduct. A native of Van Buren, Crawford County, Ark., Deweese received his first formal education from his mother. Subsequently, he read law and was admitted to the Kentucky bar. In 1856 he opened a practice in Henderson County, remaining there only a short time before moving to Denver, Colo. In 1860 he settled in Pike County, Ind.

In politics Deweese was an old-line Whig, who, upon the demise of the Whig party as a national institution, became an ardent Republican. Early in the Civil War (6 July 1861) he entered Federal service as second lieutenant, Company E, Twenty-fourth Regiment, Indiana Volunteer Infantry. In February 1862 he resigned, but that August he became a captain, and later a lieutenant colonel, in the Fourth Indiana Cavalry. He was honorably discharged in March 1864. In July 1866, when the army was reorganized, he was appointed second lieutenant in the Eighth Regiment, United States Infantry, which was assigned to North Carolina. A rabid political partisan, Deweese soon embraced Radical Republicanism, became active in North Carolina politics, and attacked President Johnson with reckless abandon. At one time he served as judge of provost court for thirty-two eastern North Carolina counties, with Raleigh as his seat. He resigned from the army (under considerable pressure because of his extreme political views) only to be appointed to the lucrative position of commissioner in bankruptcy for North Carolina. There he distinguished himself by charging—and pocketing—exorbitant fees, while urging economically distressed men to apply for bankruptcy with the false assurance that the government would collect all debts owed to them by others. But this post only whetted Deweese's ambitions. In the spring of 1868, when North Carolina had complied with the Congressional Reconstruction acts, he was elected to represent the Fourth District in the Fortieth Congress despite considerable opposition from within his own party. In the regular elections of 1868 he bought the withdrawal from candidacy of James T. Harris and the support of John A. Hyman, popular Fourth District African-Americans. Thus, in a time of Conservative impotence, he assured his election to the Forty-first Congress.

In November 1868 Deweese characterized himself as "a Radical Republican" of the Stevens-Butler stripe who believed "Holden & Brownlow the only men who understood how to reconstruct the Gvt in the South & handle Rebels & make treason odious." His actions in Congress were consistent with this avowed philosophy. He sometimes waved the "bloody shirt" and engaged in extravagant and provocative rhetoric. On one occasion when discussing the removal of political disabilities from a North Carolinian whom he did not know, he expressed a willingness to accommodate "deserving men" but concluded: "I do not want to see the gate thrown open so that all these rebels whose hands are red with the blood of my fellow-soldiers shall be brought in." Whereas he opposed the unrestricted right of southern governors to declare martial law, Deweese argued vigorously that arms should be made available to "loyal" men in the South. Claiming that the former rebels were well-armed, he viewed opposition to providing arms to Union men as a Democratic plot to undermine the newly reconstructed state governments and to disperse "us carpet-baggers." He threw down the gauntlet to Conservative Southerners, warning: "Now, I say to them, come on whenever you feel disposed to do so. Stretch forth your traitorous hands and touch one fold of the old flag, and the representatives of four million men, who, although black in skin, are yet white and loyal in heart, will throw themselves as a bulwark between you and these loyal governments, and you will live only in the sad memories of past events. . . . I think it is about time . . . that we ceased consulting these rebels. They grow worse the more we endeavor to coax and please them. The only thing they fear or respect is the mailed hand of power."

Deweese's congressional career ended abruptly on 28 Feb. 1870, when he resigned his seat without explanation. The reasons soon became clear as the House Committee on Military Affairs reported that he had accepted a $500 bribe in return for recommending a cadet for admission to the Naval Academy. The committee declared him "unworthy of a seat in the House of Representatives," indicating that it would have recommended expulsion had he not already resigned. The beleaguered former congressman pleaded ignorance of wrongdoing, indicated that he had merely accommodated a friend, and denied that the money—which had been returned—was a factor. He complained: "Hundreds have done the same thing before and will do it again."

Deweese did not return to North Carolina but took up residence in Cleveland, Ohio. There he practiced law and invested an ill-gained fortune in real estate. By 1876 he had become a Democrat, even serving as a delegate to that party's national convention. During the ensuing campaign, The Cleveland Plain Dealer published a sensational Deweese letter recounting the political and fiscal chicanery practiced by himself and other Republicans during the early years of Reconstruction. The Raleigh Daily Sentinel gave wide circulation to his allegations, causing deep consternation and chagrin among North Carolina Republicans in a crucial election year. Deweese's own cynicism and moral obtuseness were revealed when he explained his North Carolina career as follows: "I was compelled to pay money for any favor I ever received from the republican party. Their offices appeared to be in the market for sale and I purchased them, like any other doubtful stock on which speculation is made. I know of no friend of mine who had any favor from either his party or its leaders he did not pay for." The nature of Reconstruction politics implied in these remarks provides a sad commentary on the motives and actions of at least some American leaders in a time of grave national crisis.

Deweese died in Washington, D.C., and was buried in Arlington National Cemetery.