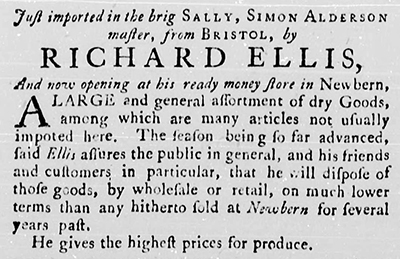 Richard Ellis, Revolutionary War patriot and shipowner, was a native of Ireland living in New Bern prior to 1765. On 16 May of that year he was one of the forty residents requesting Governor William Tryon to seek an annual salary from the Society for the Propagation of the Gospel in Foreign Parts for schoolmaster Thomas Thomlinson. A shipowner and shipper, Ellis ordered harpoons and dories from Boston in 1768 for his sloop Sally, the first vessel in the town to be so equipped, in his unsuccessful attempt to start a whaling industry. During late 1771 he was among those petitioning for a charter to start a Masonic lodge in New Bern. On 9 Jan. 1772, the day before the date of the charter, he was one of eight men attending the first meeting of St. John's Lodge. The following December he was elected its senior warden. After the Revolutionary War when the lodge was reorganized, he was unanimously chosen its Worshipful Master on 16 Mar. 1787. At the organizational session of the Grand Lodge of North Carolina in December 1787 at Tarboro, he received one of the nine votes cast for Grand Master and two for Deputy Grand Master. He was elected its first Senior Grand Warden.

Ellis was among those who insisted that the First Provincial Congress be held in New Bern, and he was a New Bern representative to the Third Provincial Congress at Hillsborough in August 1775. At the provincial council meeting in Johnston County in December 1775, he was appointed a commissioner for Port Brunswick and as such was one of several entrusted with purchasing, arming, and outfitting vessels to guard the main ports of North Carolina. In June 1775 he had been instrumental in arranging a meeting between Governor Richard Caswell and French representatives en route to Philadelphia. A letter to Caswell of 9 Feb. 1778 indicates that Ellis was well informed about English affairs. He was in charge of outfitting the Pennsylvania Farmer in October 1776 and the Caswell in June 1778. Ellis, it was said, "has been accustomed to the sea from his youth, & consequently pretty well acquainted with maritime affairs." He was one of the men commissioned to seize and sell the personal estate of Josiah Martin in December 1776. His privateers, with those of John Wright Stanly also of New Bern, were instrumental in keeping the ports open along North Carolina's Outer Banks during the Revolution as about the only lifelines of water shipments of supplies to General Washington.

On 4 July 1778 Richard Cogdell wrote to Governor Caswell: "In celebration of this day great numbers of Guns have been fired, at Stanley's wharf and Mr. Ellis' ship, three different firings from each from early morning, midday and evening, and Liquor given to the populace. Stanley and Ellis seemed to vie with each other, in a contest who should do the most honor to the day, but Mr. Ellis had the most artillery." This is believed to have been the first observance of the Fourth of July as Independence Day in North Carolina, following only those in Boston and Philadelphia.

The 1790 census of North Carolina records Ellis as living alone in his household but owning six slaves. After his death his New Bern home went to a nephew, George Ellis, who in 1800 and 1801 represented New Bern in the North Carolina House of Commons. George Ellis was also active in the local Masonic lodge until his accidental death on 6 Sept. 1808 in a gunpowder explosion while "blowing up a House to stop the ravages of a Fire." His wife was Amaryllis Sitgreaves, sister of Judge John Sitgreaves; their daughter, Arete S., was a religious worker and a teacher at Moses Griffin's school, one of the first free trade schools for orphan girls. Twin stained glass windows in Christ Episcopal Church, New Bern, memorialize Arete Ellis.

North Carolina General Assembly. "An Act to amend and continue an Act, For facilitating the Navigation of Port Bath, Port Roanoke, and Port Beaufort." North Carolina. Complete revisal of all the acts of Assembly, of the province of North-Carolina, now in force and use: together with the titles of all such laws as are obsolete, expired, or repealed: with marginal notes and references, and an exact table to the whole. Newbern [N.C.]: Printed by James Davis, printer to the Honourable the House of Assembly. 1773. 480-481. http://digital.ncdcr.gov/cdm/ref/collection/p249901coll22/id/78697 (accessed February 20, 2014).