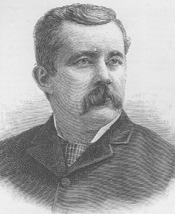 Hamilton Glover Ewart, attorney, congressman, and judge, was born in Columbia, S.C., the son of James Beckett and Mary A. McMahon Ewart. He was valedictorian of his graduating class at the University of South Carolina in 1872, when he received the degree of bachelor of laws. In 1875 he opened a law office in Hendersonville, N.C., and in 1878 and 1879 was elected to one-year terms as mayor of the town. Under U.S. Chief Justice Morrison R. Waite he was appointed register of bankruptcy for the Eighth Congressional District, a post he filled from 1874 until it was abolished in 1880. Several of his opinions were published in the National Bankruptcy Reporter. Originally a Democrat, Ewart is reported to have become a Republican in 1872 because he could not support Horace Greeley in the presidential race, preferring Ulysses S. Grant. In 1876 he was a delegate to the Republican National Convention at Cincinnati and on the state electoral ticket in the Rutherford B. Hayes campaign. On several occasions Ewart declined to be nominated for the General Assembly, but in 1886 he accepted the nomination for Congress by the Republican convention in his district. Although he was defeated, his opponent won by a much smaller majority than Democrats had enjoyed in previous elections.

In 1886, Ewart was nominated for the North Carolina House of Representatives and won by a large majority; he served during the 1887 session when he was chairman of the Committee on Corporations and a member of the Committee on Judiciary. At that time he introduced the bill to establish a Railroad Commission. Subsequently he was elected as a Republican to the United States Congress and served from December 1889 until March 1891; he was defeated for reelection in 1890 and for election in 1904. In Congress he was a member of the Committee on Claims, the Committee on the Merchant Marine, and the Committee on Private Land Claims. He also played a prominent role in the investigation of the Civil Service Commission. He spoke strongly in opposition to the federal election bill and stressed that if passed it was likely to renew animosity between North and South; he also favored federal aid to education and urged the repeal of internal revenue laws. Following his service in Congress Ewart was elected to the General Assembly of the state and served during the 1895 session but resigned immediately upon its adjournment; he served again in 1911.

In 1898, President William McKinley appointed Ewart judge of the United States District Court for the Western District of North Carolina; however, despite the fact that he was nominated on three different occasions, he was never confirmed. Nevertheless, he took his seat on the bench and served from 16 July 1898 to 4 Mar. 1899 and from 14 Apr. 1899 to 7 June 1900. Finally his nomination was withdrawn. After leaving Congress Ewart was charged with attempting to sell government publications that had been delivered to him for free distribution among his constituents. In 1916, Ewart moved from Hendersonville to Chicago where he continued to practice law. He died in Chicago and was buried in Oakdale Cemetery, Hendersonville.

Ewart owned extensive farming interests around Hendersonville and was a member of the Farmers' Alliance. In 1874 he married Sarah Cordelia Ripley, daughter of his stepfather, Colonel Valentine Ripley. They were the parents of seven children: Mary D., Eliza Adger, Hamilton Gustavus, Sarah Cordelia, Valentine, James Beckett, and Matthew Quay.

Ashe, Samuel A'Court. Cyclopedia of Eminent and Representative Men of the Carolinas of the Nineteenth Century, Volume 2. Brant & Fuller, 1892. http://books.google.com/books?id=wkYTAAAAYAAJ&source=gbs_navlinks_s&printsec=frontcover#v=onepage&q&f=false (accessed May 2, 2013).