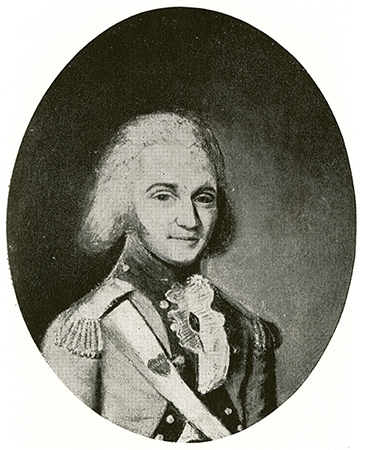 Alexander Gaston, patriot, was the fifth son of William Gaston of County Antrim, Ireland. The Gastons were Huguenots, having fled from France to Scotland in the seventeenth century and thence to northern Ireland. Two of the sons of William of Clough Water, County Antrim, were educated at Glasgow University; Alexander was preceded there by his brother Hugh, who became a distinguished Presbyterian clergyman. According to early sources, Alexander studied medicine at the University of Edinburgh, but his name does not appear in the catalogues from that institution and his university training was doubtless completed at Glasgow. He joined the British navy as a ship's surgeon and was present with the fleet in 1762, when Havana was taken by the British in the Seven Years War. An epidemic of dysentery broke out in the fleet and Dr. Gaston was stricken while attending the sick. His health was so seriously undermined that he determined to seek the salubrious air of America for recovery. By May 1764 he had settled in New Bern, the largest town in the colony of North Carolina, and soon became a leading citizen, purchasing 2,000 acres of land in the Trent River area two miles from the town.

In May 1775 he married Margaret Sharpe, a native of Cumberland County, England, who was visiting her two brothers in New Bern where they were engaged in the mercantile business. Margaret was a devout Roman Catholic and had been educated in a convent in Calais, France. It is possible that her husband had become an Episcopalian, though reared a Presbyterian, because in 1765 he signed a petition asking that the academy in New Bern be encouraged to promote the education of youth "and imprint on their tender minds the principles of the Christian religion agreeable to the establishment of the Church of England."

From the beginning of the Revolutionary War, Gaston espoused the cause of American liberty. On 23 June 1775 he was one of the band of patriots, including Richard Cogdell and Abner Nash, who seized six pieces of artillery in front of the Governor's Palace in New Bern soon after the flight of Josiah Martin, the last of the royal governors of the province. On 9 August he was appointed a member of the Committee of Safety for the District of New Bern by the Provincial Congress at Hillsborough. He was later captain of a company of volunteers who operated against the forces of Sir Henry Clinton when that officer threatened Wilmington. Gaston was also distinguished for his services in civil affairs. In December 1776 he was elected a justice of the court of pleas and quarter sessions for Craven County, and in May 1777 he was elevated to judge of the Court of Oyer and Terminer for the District of New Bern.

His wife, a woman of great dignity, superior education, and decided loyalties, was as ardent a patriot as he. A chapter is devoted to her contributions in Elizabeth F. Ellet's The Women of the American Revolution (vol. 2, 1852). Three children were born to the Gastons in New Bern. The oldest, a son, died in infancy. The younger son, William Joseph, became North Carolina's eminent jurist. Their daughter, Jane, became the second wife of John Louis Taylor, chief justice of the supreme court of North Carolina.

Naturally, Gaston was much hated by the local Tories, of which there seemed to have been a considerable number in and around New Bern. In August 1781 a raid was made on New Bern by Major James H. Craig, commandant at Wilmington, with his force of regulars and Tories. The martyrdom of Gaston as a result of this raid is nowhere better told than in the words of his son, Judge William Gaston. "The circumstances of his death," he wrote, "I have so often heard from my weeping mother that I can never forget them. An ineffectual attempt to check the march of Major Craig's detachment from Wilmington had been made, and no idea was entertained of further resistence to its entry into New Bern. Dr. Gaston was one of those who were peculiarly obnoxious to the Tories, and it was deemed advisable for all such to keep out of the way of their ferocity. He had retired to his plantation on the South side of Trent, but misled by some information respecting the movements of the detachment, he returned to town on Saturday, and stayed with his family until after breakfast on the next day. Rumors of the approach of the Tories, joined with the entreaties of Mrs. Gaston induced him then to revisit his plantation. He had quitted his house (which stood on the spot where the Bank of New Bern now stands) but a short time, when the mounted men, who consisted entirely of Tories, under the command of Captain Cox, and formed the advance of the detachment, galloped into town, and proceeded directly to the wharves. Mrs. Gaston, fearful that her husband might not have crossed the ferry, and unable to endure the agonies of suspense, rushed down the street to the Old County Wharf, and found them actually firing at him. He was in the ferry boat, at a very short distance from the shore, and alone, the boy who had been rowing the boat having jumped overboard. She threw herself between him and the assailants, and on her knees, with all a woman's eloquence, implored them to spare the life of her husband. The captain of the savage band answered these cries by damning him for a 'rebel' and his followers as 'blunderers,' called for a rifle, levelled it over her shoulder, and stretched him a corpse."

Margaret Gaston, who was only twenty-six years old at the time, never ceased to mourn her husband's death and wore black for the thirty remaining years of her life. She has been described as a lady of calm, gray eyes, beautiful features, and stately carriage. It was said that she never permitted her shoulders to touch the back of a chair. Although sometimes pressed for ready money, she apparently operated the plantation with considerable success. The census of 1790 lists her as the owner of thirty slaves, a considerable estate for that time. Her piety, kindness to the sick and destitute, and faithfulness to the church in which she had been reared made her an outstanding figure of her community until her death on 17 Dec. 1811 in New Bern.

There are descendants of Alexander Gaston through the female lines, but the last of his name, a great-grandson, Captain Hugh Jones Gaston, was killed in the Confederate Army in the Battle of Sharpsburg in 1862.

William Gaston, "Account of the Death of Dr. Alexander Gaston," Publications of the Southern History Association 9 (1905).