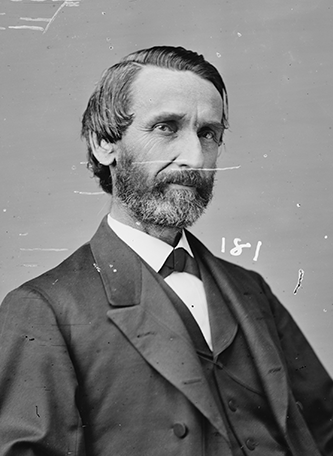 James Clarence Harper, surveyor, manufacturer, and congressman, was born in Cumberland County, Pa., the son of John Witherow Harper III, whose grandfather had emigrated to America from Ireland, and Eliza Love Horner Harper. James Clarence was one of six children; the others were Jane, Elizabeth, Mary Ann, Alexander, and Margaret. In 1831 Harper moved with his family to Darke County, Ohio, where he was educated in the common schools. At the invitation of his uncle, James Harper, young James Clarence Harper moved from Ohio to Caldwell County, N.C., which became his permanent home.

Before the Civil War, Harper's major activities centered on his surveying and business ventures. In 1841, he laid out and surveyed the town of Lenoir. In 1846–47 he surveyed the turnpike from Lenoir to Blowing Rock and helped to found the turnpike company; in 1856, he became the company's president after securing a majority of the stock. On or near his farm on the Yadkin River at Patterson (seven miles from Lenoir), Harper initiated numerous enterprises in the 1850s. He built a tannery, a gristmill, cotton and woolen mills which manufactured sizing and yarn, an oil mill, an icehouse, a saw mill, a paper mill, a blacksmith shop, and a mercantile house. He farmed and logged, and initiated banking by paying drafts written on him for credit balances. By 1855, Harper had a net worth of at least $38,000.

Harper was also committed to public service. In addition to holding several local offices, he entered the state militia as a private in 1861. He was defeated at a muster for colonel in October of that year, and his poor health prevented his active service during the Civil War. In 1865 and 1866 he served in the North Carolina House of Commons. In 1870, after Plato Durham declined to run for Congress on the Conservative ticket, Harper was nominated and won the election. He served in the Forty-second Congress, although poor health and a natural reticence minimized his role. Harper introduced only two bills, both private, and he made only one prepared speech, to oppose the Civil Rights Bill of 1872. For many years he served on the board of directors of the Western North Carolina Hospital at Morganton and assisted in the construction of the buildings. Also Harper was a longtime trustee of the Davenport Female College in Lenoir, was active in the Western North Carolina Conference of the Methodist church, and was one of the founders of the Yadkin Valley High School in 1852.

On 12 Sept. 1843 Harper married Louisa C. McDowell of Caldwell County, the granddaughter of Major Charles Gordon and the great-granddaughter of General William Lenoir. They had three children: Emma (d. 16 Oct. 1922); John Witherow, who was killed at the Battle of Southwest Creek near Kinston in 1865; and an infant son who died in 1873. Emma married Colonel Clinton A. Cilley of the Union Army who commanded the Freedmen's Bureau in the western district of North Carolina. They were the parents of three sons: Lenoir, a banker in Hickory; John, a technician and machinist in Hickory; and Gordon, advertising manager of the John Wanamaker store in Philadelphia. Harper was buried at Harper's Chapel in Patterson.