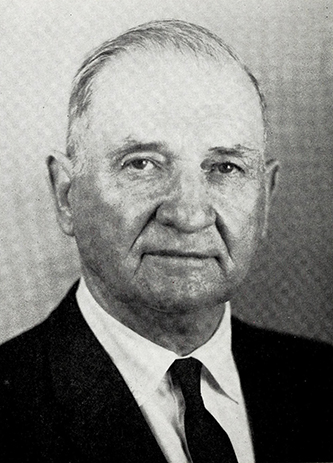 Johnson Jay Hayes, federal district court judge, was born in his parents' cabin between Cole and Purlear creeks, near Purlear, in Wilkes County. His father was John Lee Hays, son of Joseph Washington ("Wash") Hays, and his mother was Sarah Julia McNeil Hays. Johnson's older brother, Thomas, changed the spelling of their surname by adding an "e." Johnson said the event was "like a scrambled egg; we can't undo it."

After attending the Whitsett Institute in Whitsett, N.C., Hayes entered Wake Forest College in 1907 and was graduated from Wake Forest Law School in 1909: In October of that year he formed a law partnership with John A. Holbrook, but Holbrook died the following April. With John R. Jones, Hayes then established the law firm of Hayes and Jones on 1 June 1910. Four years later Hayes was elected to serve a four-year term as solicitor for the Seventeenth North Carolina Judicial District, beginning 1 Jan. 1915. He was reelected twice, but decided not to seek a fourth term.

In February 1926, the Republican state executive committee elected Hayes to succeed John Parker as national committeeman from North Carolina. Later that year, Hayes waged an unsuccessful campaign against U.S. Senator Lee S. Overman. On 1 Jan. 1927, he moved to Greensboro and joined the law firm of Brooks, Parker, and Smith.

In March 1927, Congress created the Middle District of North Carolina. After Hayes received endorsements from the chief justice, two of the four associate justices, sixteen of the twenty state Superior Court judges, and three-fourths of the lawyers in the district, President Calvin Coolidge appointed him over Frank Linney as Middle District Court judge. He took the oath of office on 6 April and, for the next thirty years, was the only judge of the district. The chief justice also assigned Hayes to hold court in New York City; Richmond, Va.; Columbia, S.C.; and Bluefield, W.Va. Between 1927 and 1957, he heard an average of 750 criminal and 150 civil cases each year.

In 1933, Hayes was the first federal judge to hold that the repeal of the Eighteenth Amendment intentionally rendered the Volstead Act inoperative, leaving the courts powerless to punish crimes committed under it. The attorney general directed the U.S. attorney to appeal directly to the United States Supreme Court. The Supreme Court upheld Hayes's decision and 30,000 defendants awaiting trial were set free.

Hayes helped organize the Wilkes Building and Loan Association (now Wilkes Savings and Loan Association) and the Kiwanis Club in Wilkes County, of which he was an active member until moving to Greensboro in 1927. Always interested in education, he was instrumental in establishing Wilkes Community College and in moving Wake Forest College from Wake County to Winston-Salem. A committed Baptist layman, Hayes served on the state general board and was a trustee of Wake Forest College and of Baptist Hospital in Winston-Salem.

In 1957, while holding court in Greensboro, Hayes suffered a heart attack, forcing him to retire. Fearing he might grow tired with nothing to do, he wrote The Land of Wilkes, a history of Wilkes County for the Wilkes Historical Society. Even during retirement, Judge Hayes often presided in court when it was necessary to clear a backlog of cases. In fact, he presided in Wilkesboro a little more than two weeks before his death.