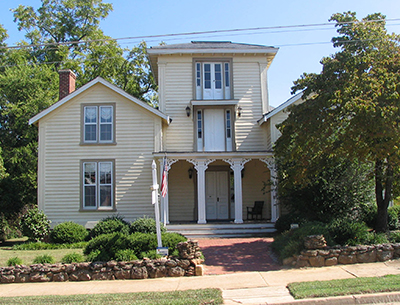 Jacob W. Holt, contractor, architect, and builder, the oldest son of David and Elizabeth ("Betsy") McGehee Holt, was born in Prince Edward County, Va. When he was still quite young his mother died and he and his brother, Thomas J., and two sisters were placed in the care of an uncle, John McGehee. Their father, an impoverished and itinerant carpenter, also died a few years later. The young brothers apparently were apprenticed to a carpenter, most likely William A. Howard of Prince Edward County who often worked in association with brickmason Dabney Cosby, later of North Carolina. Jacob's connection with Howard is not documented but arises from stylistic similiarities in the work of the two men and from the fact that Holt later named a son William Howard Kenneth Holt. In February 1838 Holt married Aurelia Ann Phillips, and by about 1840 they were the parents of a daughter, Mary C. Evidently by 1844 Holt and presumably his family moved to Warrenton, N.C., where, according to local tradition, he was involved in the construction of the grand residence of William Eaton, completed in 1843; no documentation of this exists, and the house is not much like his known later work. Holt was one of several craftsmen who moved to Warrenton in the early and middle 1840s from Prince Edward County. These included Thomas Holt (probably Jacob's brother), brickmasons Edward T. Rice and Francis Woodson, cabinetmaker Samuel N. Mills, and others. Most were Baptists, and in 1847 Holt, Woodson, Rice, and L. A. Womack bought as trustees of the "intended Warrenton Baptist Church" a lot in Warrenton. Here was soon built a small frame temple-from Greek Revival church—probably Holt's work.

Although Holt lived and worked in Warrenton throughout most of the town's 1840s–1860s boom period, employing a work force of sixty including enslaved people and assistants, there is no documentation for any of his buildings before 1853. Local historian Elizabeth Montgomery (who was a little girl in antebellum days in Warrenton) recorded that "Under the superintendence of these three contractors [Jacob and Thomas Holt and E. T. Rice] most of the handsome residences in the county, as well as those in town, before the War Between the States, were built." More than twenty Greek Revival-style houses stand in Warrenton and there are others in the countryside. Most of these have strong similiarities to Holt's later, documented work and are probably the products of his workshop.

The 1850 census lists Holt as a thirty-eight-year-old carpenter with a wife and three young children. Also in his household were eighteen young men, many from Virginia, presumably workmen, assistants, and apprentices. Holt also enslaved forty-two people, mostly young men. By 1860, at age forty-nine, he had six children. The census listed him as a "master mechanic," with fourteen young men—all carpenters—in the household.

In 1853 construction began on a major project for Warren County—the new courthouse. County court records document regular payments from the "Courthouse Fund" to Holt and to his associates, brickmasons Woodson and Rice, throughout the 1853–57 construction work. The two-story brick temple-form courthouse, for fifty years the centerpiece of Warrenton, bears similiarities to Holt's probably earlier work in the Greek Revival style, but it features the bracketed cornice of the coming Italianate style, in which he was so prolific.

Beginning in 1856 Holt began work on a number of buildings for which documentation survives. All had the basic, boxy Greek Revival form, but were enriched by brackets along cornices, curvilinear and circular motifs on doors and porches, arched elements at windows and in mantels, and other repetitive, distinctive features. Among those well documented by family papers are Vine Hill in Franklin County, built in 1856 for Archibald D. Williams; Sylva Sonora in Warren County, now gone, built for the Boyd family; and Eureka, a grand, towered house built in 1857–58 for the Baskervill family in Mecklenburg County, Va. The contract for Eureka states that the source for the design was W. Ranlett's The Architect, a widely used architectural pattern book.

Not documented, but stylistically similar, are half a dozen dwellings in Warrenton plus the Presbyterian Church, and perhaps twenty structures in the county. In addition, and quite different from his other work, is Holt's own house in Warrenton. He did not own the land but leased it from at least 1856 to 1859, and on it were located his dwelling and workshop. The design Holt obviously took from Andrew Jackson Downing's Cottage Residences, a popular pattern book that promulgated the picturesque bracketed and Gothic mode supplanting the classical Greek Revival. The house has a central tower flanked by projecting gabled wings, an inset porch, and ornate eaves—as does Downing's Fig. 72, "A Cottage in the Italian or Tuscan Style." It appears that Holt used Downing's publication for details in many of his houses, but only in his own dwelling did he stray from the traditional boxy house into the more modish villa form.

Holt also worked in Mecklenburg and Charlotte counties in southern Virginia, and in Vance, Granville, Halifax, Nash, Northampton, Franklin, and Wake counties in North Carolina. In both Raleigh and Chapel Hill, too, houses of Holt's mode once existed.

Shortly before the Civil War, Holt expanded his field of operation beyond building for a planter clientele and undertook construction of three of the substantial educational buildings going up in those prosperous years. He took the carpentry contract for the massive St. John's College at Oxford, which was built during the late 1850s, with John Berry, Hillsborough brickmason, undertaking the brickwork. In 1860 Holt gained commissions for both carpentry and brickwork in constructing Peace Institute in Raleigh and the new main building at Trinity College in Randolph County. A newspaper article from the High Point Reporter, quoted in the North Carolina Standard of 31 Oct. 1860, described him as "one of the first architects in the state," who had "put up many fine residences and public buildings in the eastern part of the state."

In these large projects Holt worked as a contractor building from an architect's designs—in contrast to his accustomed role of accomplishing both design and construction. First William Percival, a talented and itinerant English architect, and then Holt's brother Thomas, who had worked in Jacob's carpentry shop in Warrenton until moving to Raleigh in the late 1850s, served as architect for Peace Institute. Trinity president Braxton Craven was credited with the design of the ambitious new building, fronted by columns. The Civil War prevented completion of the Peace building; it was patched up in makeshift fashion to serve as a hospital, later housed the Freedman's Bureau, and finally was reclaimed for its original purpose as a Presbyterian school for young women. The Trinity project was never begun.

After the war, Holt's work continued many of the motifs of his antebellum buildings, with some accommodation to the increased verticality, roofline complexity, and ornateness of developing late nineteenth-century styles. In 1868 he remodeled the Central Hotel in Warrenton: a newspaper article of 14 February noted that "our friend Jacob Holt Esq., so well known in North Carolina and Virginia, is busily employed in repairing the establishment."

Soon after the war, Holt moved to Virginia and continued to build. In 1873 he constructed the Boydton Methodist Church; a contemporary newspaper commended "Mr. Jacob Holt, a workman of more architectural taste and more faithful to comply with his contracts could not be found." Other buildings in Chase City and Boydton are highly suggestive of his hand. Family tradition at Shadow Lawn in Chase City strongly claims his authorship. His last known work, however, was back in North Carolina, in Murfreesboro. A Norfolk paper of 21 Apr. 1875 reported: "New house of D. A. Barnes about finished. Built by Jacob W. Holt of Chase City, Mecklenburg Co., Va." An early photograph shows a boxy frame house with ornate, vigorous woodwork.

Although not trend-setting or sophisticated, Jacob Holt's work is important as a consistent and highly personalized oeuvre within the mainstream of mid-nineteenth-century American vernacular architecture. Particularly significant are three aspects of his work: he was prolific, constructing dozens of buildings in a many-county area, perhaps as many as eighty; many of his buildings are documented and either surviving or pictured; and at least two mid-nineteenth-century pattern books are known to have been his sources. His handsome Greek Revival buildings and distinctive, more ornate Italianate ones are an important element in the mid-nineteenth-century architectural fabric of North Carolina.