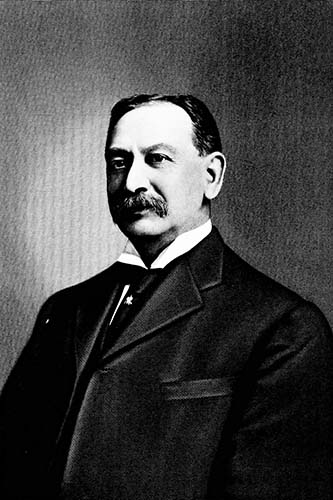 Lawrence Shackleford Holt, textile manufacturer and capitalist, was born in Alamance County at Locust Grove, the home of his parents near the village of Alamance. He was the youngest of ten children of Edwin Michael and Emily Farish Holt. Holt received his elementary education at the Reverend Dr. Alexander Wilson's school at Melville, in the southern part of Alamance County, after which he attended Horner Military Academy at Oxford. He then enrolled at Davidson College as a member of the class of 1871, but did not remain to graduate because he was impatient to enter the business world.

To satisfy his son's ambition, the elder Holt placed him in charge of a wholesale grocery business that he owned in Charlotte. After proving himself in this capacity, the young manager persuaded his father and brothers, Thomas, James, William, and Banks, to join him in founding the Commercial National Bank of Charlotte, which soon became—and remained—a highly successful financial institution.

The year after his marriage, Holt returned to Alamance County and built a home near Locust Grove. He became a partner in the family firm of Edwin M. Holt's Sons, operator of the cotton mill at Alamance and the Carolina Cotton Mills which it had built on the Haw River. For the next several years, in cooperation with one or more of his brothers and William A. Erwin, a brother-in-law, Holt helped found the Bellemont Cotton Mills and the E. M. Holt Plaid Mills. He also became one of the owners of a half interest in the Altamahaw Cotton Mills; the other half was owned by J. Q. Gant, his brother-in-law by marriage to Corinna Erwin. The new firm of Holt, Gant, and Holt operated six miles northeast of Mill Point (now Elon College).

In 1884, Holt attempted to buy the bankrupt Lafayette Mills, at Company Shops, but was outbid by R. J. Reynolds. The tobacco magnate soon changed his plans and sold the factory to Holt for $17,000. In this transaction, the industrialist fulfilled his greatest ambition—to become the sole owner of a textile mill. By concentrating all his resources on this venture, he was able to replace the knitting machines used in the defunct plant with 2,160 spindles and 124 looms. In 1885, the Aurora Cotton Mills began production; thereafter its output increased regularly as various additions were made to the plant.

In order to be near his principal business, Holt moved from his country home to Blythewood, an ornate house he built at Company Shops about the time the town's name was changed to Burlington. Like his father, he firmly believed in a family-owned-and-operated business, and in 1896 he included his sons in the mill's management by forming the firm of Lawrence S. Holt and Sons. Subsequent expansion followed, and the enterprise eventually included the Gem Cotton Mills in Gibsonville and the Sevier Cotton Mills in Kings Mountain. All of the firms were profitable. Moreover, Holt was credited with being the "first manufacturer in the South" to voluntarily shorten the working day from twelve to eleven hours without reducing pay.

While born into a Presbyterian family, Holt married an Episcopalian and became a communicant of that church. In 1879 he played a leading role in the construction of St. Athanasius Protestant Episcopal Church at Company Shops, which still stands. In 1911 he built and endowed the impressive Episcopal Church of the Holy Comforter in Burlington in memory of his daughter, Emily Farish, who died in 1885 at age five.

Grieved by the death of his wife in 1918, Holt closed Blythewood; it remained unoccupied for two decades. Leaving his mill operation in the hands of his sons, the industrialist retired to Washington, D.C.

When new materials were introduced into the textile industry, Eugene Holt advised replacing cotton yarn with rayon, but his father would not agree to the change. Shortly after this difference of opinion, Aurora Cotton Mills ceased operation. The plant was first rented, then sold to other textile corporations. Eugene moved to Richmond, Va., where he pursued his interest in rayon. Lawrence, Jr., became a real estate promoter in Asheville, and Erwin lived a retired life in Burlington. All of the manufacturer's family left Alamance County.

Near the end of his life, Holt moved to western North Carolina in the interest of his health, and he died in a Statesville hospital. His remains were taken to Burlington and interred in the family plot in the cemetery adjacent to St. Athanasius Church. He had been a Republican in politics, a charitable conservative, and a man of keen financial judgment.