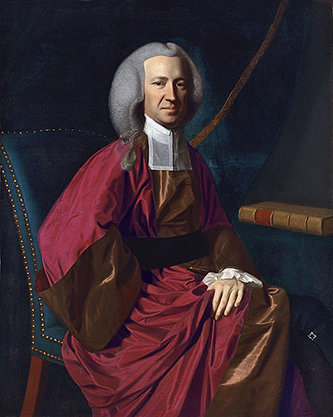 Martin Howard, Loyalist and chief justice of North Carolina, was born either in England or in New England (authorities disagree) but grew up in Rhode Island where his father, Martin, Sr., was admitted as a freeman of Newport in May 1726. Young Howard read law in Newport under James Honyman, Jr., who later became attorney general of Rhode Island. One of his biographers wrote that he studied at an Inn of Court, but Howard is not listed in Jones's American Members of the Inns of Court. On 29 Dec. 1749 he married his first wife, Ann Brenton Conklin of South Kingstown, R.I. They had three children—a son and two daughters. Although a regular attendant at Newport's Anglican Trinity Church, Howard had been born and bred an Anabaptist and was not baptized as an Anglican until the summer of 1770 in North Carolina. During 1752–55 he served as librarian of the famed Redwood Library. The Rhode Island legislature chose him as a delegate to the Albany Congress in June 1754 to negotiate with the Six Nations (composing the Iroquois Confederacy) in the coming hostilities with France. In 1756 Howard was elected to the Rhode Island Assembly and four years later served on the committee to revise the laws of the colony.

During the turbulent years after the close of the French and Indian War in 1763, Howard was a member of the conservative Newport Club, which included such figures as Peter Harrison and Dr. Thomas Moffat. These men abhorred the disorder of Rhode Island politics, and in April 1764 Howard joined with Moffat in a newspaper campaign to have the colony's charter revoked and royal government imposed. As a part of this effort, Howard corresponded with Benjamin Franklin, who was trying to accomplish the same end in Pennsylvania. In February 1765 Howard wrote a pamphlet called A Letter from a Gentleman at Halifax to his Friend in Rhode Island. In it he responded to a pamphlet by Governor Stephen Hopkins of the previous November that had attacked the Newport Club. The thrust of Howard's essay, however, was support of Parliament's authority to tax the colonies. Although Howard had not been named as author on the pamphlet's title page, there was no question among his friends or enemies as to who had written it. Undoubtedly when he was attacked as a Stamp Act agent in the summer of 1765, much of the hatred vented against Howard resulted from his identification as the "Gentleman at Halifax."

When leaders of the Stamp Act riots, which occurred in Newport on 27–28 Aug. 1765, began formulating their plans, they reserved a special enmity for Howard because of his pamphlet allegations that Newport merchants were little better than smugglers. On the morning of 27 August a gallows was erected near Colony House in Newport with effigies of the three stamp agents hanging there. Crowds gathered and by 5:00 P.M. free drinks were provided. After sunset the three figures were cut down and burned. That evening Howard was walking through town with John Robinson, the customs officer, when Robinson was attacked by a small crowd. Howard helped rescue his friend and then upbraided the ruffians for their behavior. The next evening a mob with painted faces and broad axes broke into Howard's house, demolished his furniture, and drank the contents of his wine cellar. Later that night they returned and smashed his doors, floors, and windows, and even cut down the trees in his front yard. By 29 August Howard was so concerned for his own safety and that of his family that he boarded the British ship Cygnet and two days later sailed for England, arriving there in October. Seven years later while in North Carolina, he submitted a claim for £524 13s. sterling to the Rhode Island legislature for his losses in the riots. The assembly lowered the award to £111 18s. but never paid it. In a swipe at Howard as a defender of the Crown, the legislature agreed to pay his award when England fully recompensed Rhode Island for its role in the French and Indian War. After he demonstrated the extent of his losses and protested his loyalty to friends in England, the Crown offered Howard the chief justiceship of North Carolina. He accepted, and his commission was issued on 29 July 1766.

By January 1767, Howard was in North Carolina and on the twenty-third of the month qualified as chief justice before the governor and Council. At some time during the year he went to Boston to sit for his portrait by John Singleton Copley. While there he married his second wife, Abigail Greenleaf, daughter of the sheriff of Suffolk County, Mass.

Having escaped from a volatile situation in Rhode Island only a short time before, Howard soon found himself in the midst of the Regulator upheaval in North Carolina. He presided over all higher court trials of Regulators in the fall of 1768 and generally was considered to have been fair by backcountry residents. In fact, when the Regulators planned to disrupt the Salisbury court session of March 1771, they specifically excluded the chief justice from their hatred but not his colleagues. That spring he presided at the trials of the rebel leaders of the Battle of Alamance, six of whom were executed.

A man of considerable intellect as well as courage, Howard condemned the institution of slavery from the Superior Court bench late in 1771. In his charge to a grand jury that had failed to convict a white man for murdering a slave, he said: "Slavery is an adventitious, not a natural state. The souls and bodies of negroes are of the same quality with ours—they are our own fellow creatures, tho' in humbler circumstances, and are capable of the same happiness and misery with us." The entire text of Howard's remarks was published in both the Cape Fear Mercury (Wilmington) and the Newport Mercury (Newport, R.I.). His remarks were a powerful intellectual indictment of the slave system and may have contributed to passage of an act in 1773 by the General Assembly providing punishments and fines for the killing of black bondsmen.

In January 1770 Governor William Tryon nominated Howard to a seat on the royal Council, and on 19 November he was sworn in. Faithful in his attendance at Council sessions, Howard usually sided with the governor—especially during the crucial months prior to the American Revolution. When the Superior Court system was suspended in late 1772, he served as chief justice of the prerogative courts established by Governor Josiah Martin but his income from fees was diminished. His salary of £70 per year had not been paid since 1770, but he had averaged at least £800 a year in fees and other perquisites. Lorenzo Sabine writes that in the summer of 1777 Howard said: "I shall have no argument with the Sons of Liberty of Newport; it was they who made me Chief Justice of North Carolina, with a thousand pounds sterling a year." Because of his association with the hated prerogative courts, Howard had become the most despised official in the colony (next to the governor) by the summer of 1775. Yet when full-scale fighting broke out, he was able to withdraw quietly to his plantation, Richmond, on the Neuse River in Craven County. There he lived a remote existence, as his letter thanking James Iredell for a personal kindness in May 1777 indicates: "An instance of civility to an obscure man in the woods, is as flattering as a compliment to a worn-out beauty. . . . I have lately been so little accustomed even to the common courtesies of life that a sentiment of kindness comes upon me by surprise."

By midsummer 1777, it became necessary for Howard to leave North Carolina when he refused to take an oath of loyalty to the state. He moved his family to New York, and less than a year later went on to England and settled in Middlesex County. Howard was awarded a pension of £250 per year for his loyalty to the British government. In November (one account says the fourth; another, the twenty-fourth) 1781 he died. After the war, his wife and daughter settled in Massachusetts.