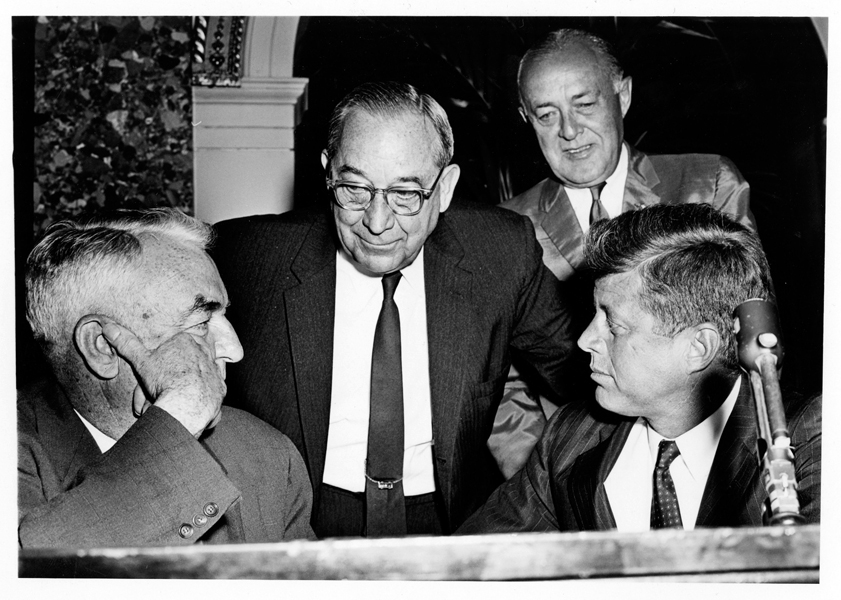 Benjamin Everett Jordan, textile executive and U.S. senator, was born in Ramseur, the son of Ann Elizabeth Sellers and Henry Harrison Jordan, a Methodist minister. He attended Rutherford College Preparatory School and, in 1914–15, Trinity College (now Duke University). From 1915 to 1918 he worked in an uncle's jewelry store in Wellington, Kans. Jordan served in the U.S. Army Tank Corps in France in 1918 and with the occupation forces in Germany in 1919.

In 1920 he took a job with a textile mill in Gastonia, where he was plant superintendent of Myrtle Mill from 1923 to 1926 and of the Gray Mills from 1926 to 1927. In the latter year he was elected secretary-treasurer and general manager of the newly formed Sellers Manufacturing Company, organized by Jordan, his uncle Charles V. Sellers, a Burlington merchant, and other members of the Sellers family. The company purchased a textile mill on the Haw River at Saxapahaw which had been in receivership and standing idle for over three years. The plant was converted to the production of fine-combed cotton yarns intended to supply the local hosiery industry. By 1932 the corporation had purchased equipment for the production of mercerized combed yarns and silk yarn. As a result of plant improvements and the construction of a concrete dam in 1938, Sellers Manufacturing continued to grow. In the late thirties and forties the Sellers group purchased spinning mills in Cedar Falls, Burlington, and Wake Forest which were placed under Jordan's management. In the fifties the company added a dyeing process and equipment for the spinning and blending of synthetic fibers. 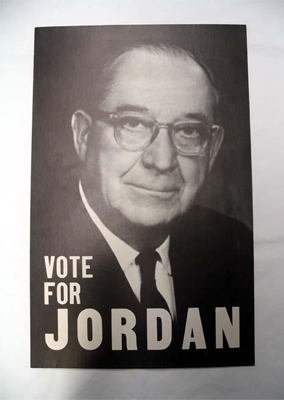 At the 1952 state Democratic convention, Jordan broke with Scott over the presidential nomination; Jordan supported Senator Richard Russell of Georgia, whereas Scott backed Adlai Stevenson. Scott resented Jordan's business alliance with Scott's political enemy, Senator Willis Smith, and Jordan's support of William B. Umstead's gubernatorial candidacy. Jordan continued as party chairman under Governor Umstead until his election as Democratic national committeeman in 1954—a post he held until his appointment to the Senate.

In April 1958 Governor Luther Hodges appointed Jordan to the U.S. Senate to fill the vacancy caused by the death of Kerr Scott, and in November Jordan was elected to fill the remainder of the term ending in January 1961. Several state newspapers suggested that Jordan was appointed as a "seat warmer" until Hodges could run for the Senate in 1960—although both Hodges and Jordan denied making a deal for Jordan not to seek reelection.

Jordan was elected to two full terms in the Senate in 1960 and 1966. His age and health were important issues in the 1972 Democratic primary in which he was defeated by Nick Galifianakis, who in turn lost the general election to Republican Jesse Helms.

As a leader of the conservative wing of the state Democratic party, Jordan faithfully represented the state's tobacco and textile interests. He introduced the "acreage-poundage" legislation that brought sweeping changes in the tobacco marketing system and was instrumental in maintaining tobacco price supports. He also obtained federal appropriations for development of the state's water resources, harbor improvements, and an environmental health center in the Research Triangle Park. In 1964, he entered the national spotlight as chairman of the Rules Committee which investigated the activities of former Senate Democratic secretary Bobby Baker. Jordan's voting record was increasingly liberal during his tenure in the Senate. He generally supported the social welfare, educational, agricultural, and taxation programs of the Kennedy and Johnson administrations while opposing civil rights measures. He was regarded as a dove on the issue of the Vietnam War. In 1970 he broke ranks with other southern Democrats to vote in favor of the Cooper-Church amendment to the defense appropriations bill. The amendment passed, limiting the president's power to extend U.S. participation in the war. In 1971 he supported the McGovern-Hatfield end-the-war amendment.

Jordan's civic activities included service as a member of the North Carolina Peace Officers Benefit and Retirement Commission (1943–48) and of the North Carolina Medical Care Commission (1945–51). He was a member of the board of trustees of American University, Duke University, and Elon College; chairman of the board of trustees of Alamance County General Hospital; a director of the Alamance County chapter of the American Red Cross; an active supporter of the Cherokee Council of the Boy Scouts of America; and president and a director of the Alamance County Tuberculosis Association.

In 1924 Jordan married Katherine McLean, daughter of Robert Clyde McLean, a Gastonia cotton merchant and realtor. They had three children: Benjamin Everett, Rose Ann (m. Roger Gant, Jr.), and John McLean. Jordan died of cancer at his home in Saxapahaw, thirty-seven months after an operation for cancer of the colon. He was buried in Pine Hill Cemetery, Burlington.