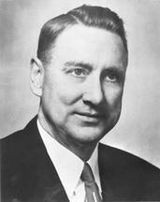 Willis Smith, lawyer and U.S. senator, was born in Norfolk, Va., the son of Willis and Mary Shaw Creecy Smith. Two years later, when his father died, his mother moved to Elizabeth City and operated a small private school. Smith attended the Atlantic Collegiate Institute in Elizabeth City and was graduated in 1910 from Trinity College (now Duke University) in Durham. In 1912 he completed the course of study at Trinity's law school and was admitted to the bar in Pasquotank County. It was in Raleigh, however, that he practiced law, first in partnership with John W. Hinsdale, then with William B. Duncan (1915–18), Raymond C. Maxwell (1922–24), and W. T. Joyner (1926–32). After 1932 his partners were Oscar Leach and John H. Anderson, Jr., in the firm of Smith, Leach, and Anderson. His practice involved civil, corporate, industrial, and insurance law.

From 1915 to 1920 Smith was inheritance tax attorney for North Carolina, with service in the U.S. Army at Fort Monroe, Va., in 1918. A successful candidate for the North Carolina House of Representatives in 1927, he was reelected for the 1929 and 1931 sessions and served as speaker of the house in 1931. He did not seek public office again until 1950 but was chairman of the state Democratic convention in 1940 and a delegate to the Democratic National Convention in 1944.

In 1950 Smith was a candidate for the office of U.S. senator, opposing Frank Porter Graham. Graham, former president of The University of North Carolina, had been appointed to the Senate in 1949 upon the death of J. Melville Broughton. He led the voting in the first primary, but Smith called for and won a second primary. As the Democratic nominee, Smith was elected to the Senate in November 1950 and took office on 27 November. The primary had been one of the most bitter in the state's history. Graham was accused of favoring the Fair Employment Practice Commission, which, it was said, would require the hiring of African Americans. He was attacked as a supporter of socialism and as an opponent of segregation. A novel based on the campaign, The Kingpin by Tom Wicker, was published in 1953.

Smith, a Methodist, was a member of the Kiwanis Club and the American Legion. Within the American Bar Association, he served on the general council (1935–36), on the board of governors (1941–44), and as president (1945–46). He was a member of the North Carolina State Bar Association (president, 1941–42), American Judicature Society, and International Association of Insurance Counsel (president, 1941–43). Named to the board of trustees of Duke University in 1929, he was elected chairman of the board in 1946. In 1933 he served on a committee that prepared rules of practice for the federal courts in North Carolina. In 1946 he represented the United States as an observer at the Nürnberg war trials, and in 1947 he was appointed to the President's Amnesty Board. He was a delegate from the United States to the Interparliamentary Union in Istanbul, Turkey, in 1951 and chairman of the American delegation to the Interparliamentary Union in Bern, Switzerland, in 1952.