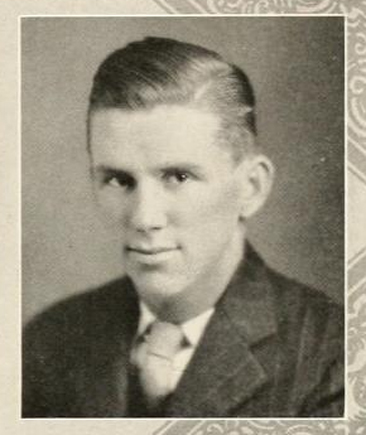 John Davis Larkins, Jr., judge, legislator, and political leader, was born in Morristown, Tenn., the son of Charles H. and Minnie Dorsett Larkins. His mother died of typhoid fever when he was just a few weeks old and his father died soon afterwards. He was adopted by an uncle, the Reverend John Davis Larkins, for whom he had already been named, and his wife, Emma Cooper Larkins. Young Larkins grew up in Cedartown and Hazelhurst, Ga., and Fayetteville, N.C., where his uncle, a Baptist minister, held pastorates.

Larkins entered school early and began in the second grade; he finished high school in Greensboro at age fifteen. Graduated from Wake Forest College in 1929, he entered law school in the fall but his money soon gave out. Nevertheless, with the assistance of the dean of the law school, he was granted permission to take the bar exam in January 1930; he passed but was obliged to wait until his twenty-first birthday the following June to be licensed. He took a job in a law office in Charlotte, learned more law, and met Pauline Murrill, of Jacksonville, a senior at Queens College, whom he married on 15 Mar. 1930. In August the newly licensed attorney and his bride went to Trenton in Jones County on vacation where a classmate persuaded him to open a law practice. There he remained until his death at age eighty.

Larkins served in the North Carolina Senate during the special sessions of 1936 and 1938 and for the regular terms of 1937, 1939, 1941 (when he was president protem), 1943, 1949, 1951, and 1953. In 1938 he was chairman of the State Constitutional Amendment Committee Campaign, and in 1945 during World War II he was a private in the army. In 1955–56 he was liaison officer and legislative counsel to Governor Luther H. Hodges. Long active in the Democratic party, Larkins was secretary and then chairman of the state Democratic executive committee and was a delegate to five national conventions between 1940 and 1960. On numerous occasions he was chairman of the Jackson Day Dinner, the annual Democratic fund-raising event. In 1960 he was an unsuccessful candidate for the party's nomination for governor.

In August 1961 Larkins was named U.S. judge of the Eastern District of North Carolina and in August 1975 was elevated to the position of chief judge for the district. In June 1979 he became senior judge, thereafter handling fewer cases. As a federal judge he presided over hundreds of criminal and civil cases; it was he who required the state to provide law libraries in the prison systems. Many of his decisions, especially in school desegregation cases, were unpopular, but a colleague pointed out that he did what he had to do rather than make a popular decision that would be overturned on appeal. Because of his many decisions concerning the environment, he came to be recognized as an authority on ecology.

Larkins and his wife were the parents of two daughters: Emma Sue and Pauline. A Baptist, he was buried in the Trenton cemetery.