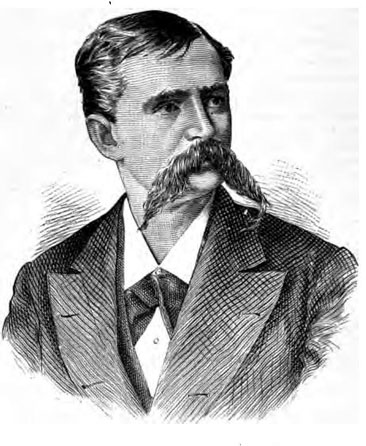 Louis Charles Latham, Confederate officer, congressman, and attorney, was born in Plymouth, the son of Charles and Ann Taylor Walker Latham. He was graduated with honors at age nineteen from The University of North Carolina, ranking second in his class. After reading law for a short while under Judge Asa Biggs, he studied law at Harvard during the year 1859–60. With the approach of the Civil War he returned home and on 20 May 1861, the day North Carolina seceded from the Union, he was named captain of a company in the First Regiment. Wounded at the Battle of Sharpsburg, he soon became major of the regiment and was regimental commander at Chancellorsville; wounded at the Wilderness on 5 May 1864, he returned home to recover and while there was elected to the North Carolina Senate. Before beginning his legislative duties, however, he returned to the army and was present when General Robert E. Lee surrendered at Appomattox. He then served in the legislative sessions between November 1865 and March 1866. Resuming his law studies, he was licensed to practice. In 1870–72 he again served in the state senate and for a time presided in the absence of the president. In 1875 he moved from Plymouth to Greenville.

Latham was an unsuccessful candidate for Congress in 1872, 1874, and 1878 but was nominated and elected in 1880. He served in the House of Representatives during the years 1881–83 but was defeated for reelection in 1882. Again a candidate, he was elected in 1886 and served a second term in 1887–89. Retiring from politics thereafter, he came to be recognized as one of the most able and eloquent lawyers in the state.

Married first to Annie Norcom of Plymouth, Latham was the father of a daughter, Camille. His second wife was Lavinia Emilia Monteiro of Richmond, Va., and they were the parents of Louise, Charles, Louis, and Andrew. A Democrat and a Methodist, Latham died in Baltimore, Md., following an operation and was buried in the Episcopal cemetery, Greenville.